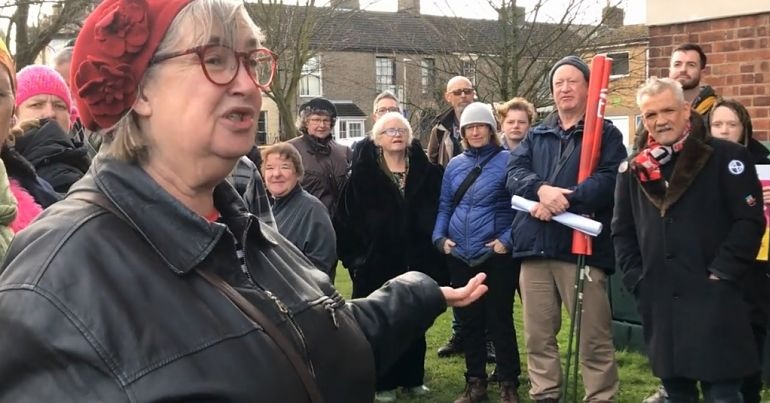 Just how emboldened Britain’s racists feel after the UK’s departure from the EU became apparent on 31 January. In a Norfolk tower block, someone put up a poster effectively instructing residents to speak English or leave. But just how distasteful that racism is to Britons has also become apparent in residents’ response to the poster.

They’ve made it clear that everyone is welcome – except the bigot who posted this disgusting bile.

‘No tolerance for diversity’

As The Canary‘s Tom Coburg explained on 2 February:

A poster, put up in a block of flats, told residents “we do not tolerate” people speaking languages other than English. A sign bearing the title “Happy Brexit Day” was found stuck to fire doors on Winchester Tower in Norwich on 31 January. The discovery came hours before the UK officially left the European Union.

the signs were left on fire doors across all 15 floors of the block of flats before being removed by the caretaker.

The timing of the poster’s message, which included an ultimatum to “evolve or leave”, has surprised no one. Politicians have scapegoated immigrants for years to cover for their own failings and treated foreign-born UK residents like dirt. Although people supported leaving the EU for a number of reasons, the whole Brexit exercise has certainly brought Britain’s racist civilians out of the woodwork.

No tolerance for intolerance

But Britain’s emboldened racists are meeting opposition. As the Norwich Evening News reported, residents in the tower block where the poster went up have responded “with fliers of their own filled with messages of support and tolerance”. The outlet says residents have posted several fliers and petitions on pillars and noticeboards inside.

One, which has attracted several signatures, reads “Everyone is welcome here – except bigots”. Another states:

To all of our European neighbours who live, work and contribute to our wonderful city.

You are most welcome and we appreciate all that you do in our community.

You may have seen a photo of a poster that has appeared in one of our properties.

Norwich has a proud history of being a welcoming city, and
we will not tolerate this behaviour. 1/2

Meanwhile, people gathered outside the tower block on 2 February to show their support for immigrants and opposition to racism. A tenant, Poppy Rose, commented:

We are not a racist community here – we are [a] caring one and this is showing that. Nobody deserves to be mistreated.

I hope the person who made the poster has seen this demonstration and has now seen the error of his or her ways – although I very much doubt that.

The response of residents is heartening. Because although racists are clearly buoyed by the direction the UK is currently taking, people aren’t letting their bigotry go unchallenged. They are countering hate with love, and intolerance with reinvigorated good will.

In short, citizens are sending a message to xenophobes that their prejudice will not pass. It’s a good job they are too. Because judging by the record of the governing party, there’s certainly no one at the helm able to lead the country towards a less hate-filled place.