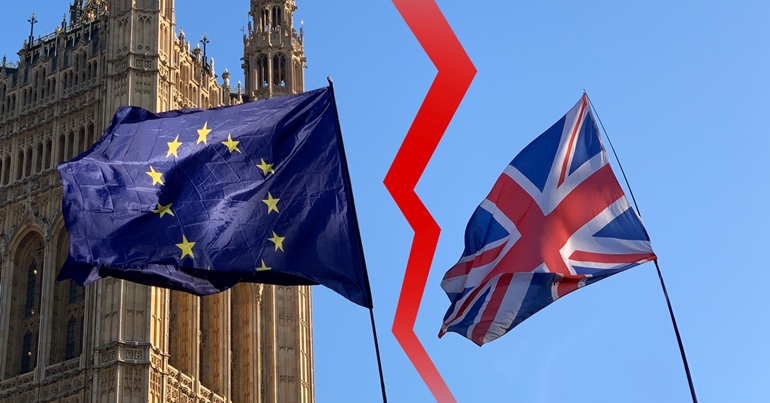 When the UK formally left the EU on 31 January, it entered a transition period. This period, during which the EU and UK negotiate their future relationship, continues until the end of December this year. But in the meantime, EU rules still apply in the UK. So naturally, there hasn’t been any significant change to life in the UK since it left.

This point must be crystal clear for those who campaigned for Brexit. So it’s somewhat surprising, if not misleading, for prominent Brexiteers to celebrate the absence of catastrophe as a vindication of their campaign. Because it’s simply too soon to tell; and too hard to distinguish potential Brexit catastrophe from that borne from Tory austerity.

In fact, there couldn’t be any greater disaster for British people than the hardship already imposed by Tory austerity governments. This happened long before Brexit Day and it had precious little to do with EU membership.

So it beggars belief why two leading Brexiteers would celebrate the ‘lack of doom, food riots and medicine shortages’ as the UK left last Friday night:

I see the ‘planes are still flying. Local supermarket still full of food. Restaurants in post-Brexit London still packed on a Saturday night. Do you suppose the doom-mongers who said Leaving the EU would bring ruin are feeling just a little foolish?

One day in and so far:
❌No food riots
❌No medicine shortages
❌No gridlocked motorways
❌No migrant camps in Kent
❌No collapse in house prices
❌No emergency tax rises
❌No world war
Weren't we told that "It's not Project Fear, it's Project Reality"?

Another Brexiteer got in on the act too: 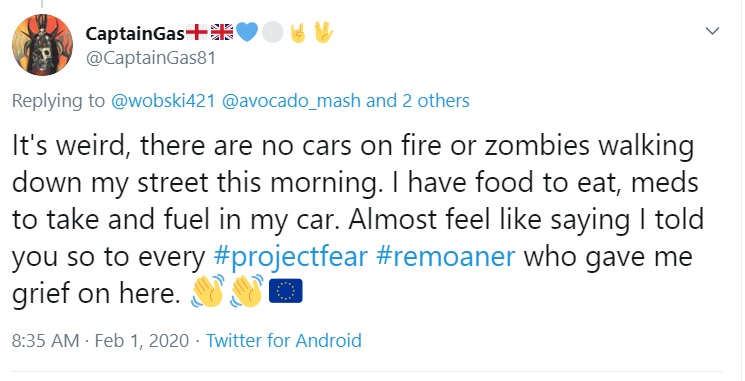 There was a huge reaction to their comments as people called them out:

This level of ignorance is quite simply baffling! We have just entered a transition period! https://t.co/0UqpeSXssL

Spotted a few high profile Brexiteers telling us that planes are still flying, food is still on the shelves etc.
You'd think they'd know about the transition period wouldn't you?

And even one prominent ex-Tory was stumped by their tweets:

This is a most peculiar and misleading point – we have only so far entered a transition period – we are still in all EU regulation, trade, services, tariff and quota schemes until the end of the year – none of this – as presumably you know – would be affected. https://t.co/EqBCKMQJIP

One person provided a short and clear explanation to resolve any confusion: 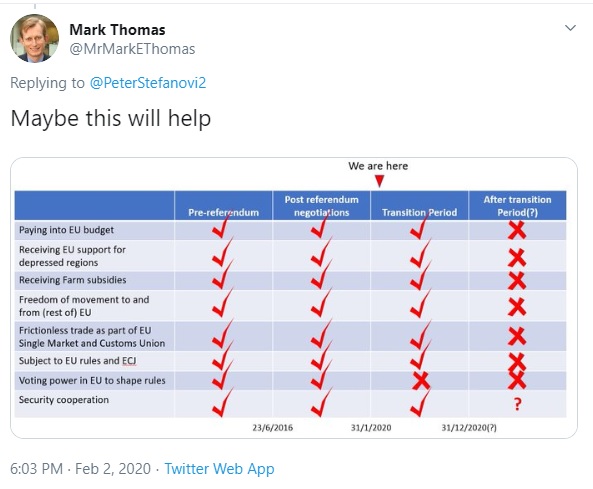 But Human Rights Watch’s European media director Andrew Stroehlein wasn’t buying the idea that there was a misunderstanding:

So on 31 January, there couldn’t have been a catastrophe. At least, nothing worse than the catastrophes already in motion. And that’s because the UK has now been living under devastating Tory austerity for almost a decade. And as Sajid Javid announced the continuation of this austerity, things could be about to get even worse.

Now that Boris Johnson’s Brexit Bill is law, things are not only likely to get worse for working British people, but also for refugee children trying to join their parents in the UK. Those who backed a Tory Brexit should be aware of the act (and the party) that they supported. Because the Conservative-led catastrophe has been underway for some time.