In a powerful speech, a refugee tells the UN the truth about Australia's offshore gulag - Canary 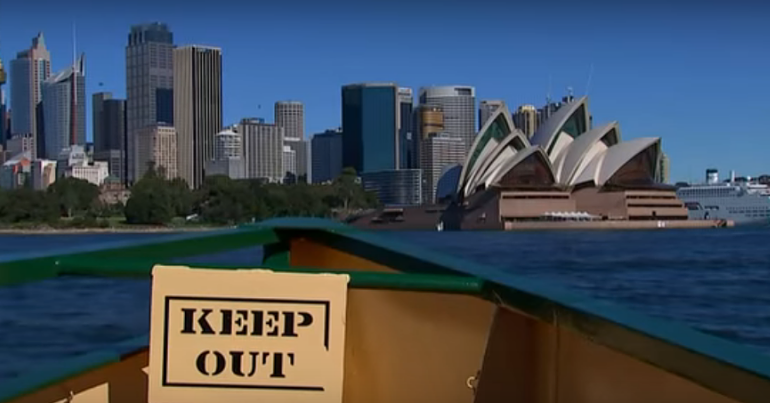 A Sudanese refugee, locked up for six years by Australia on a remote island, has delivered a powerful speech to the UN. He spoke about scores of suicide attempts by his fellow detainees and the cruelty of Australia’s indefinite detention policy.

Abdul Aziz Muhamat addressed the 41st session of the UN Human Rights Council about the conditions of Australia’s offshore detention centres on Manus Island (Papua New Guinea) and the tiny island nation of Nauru. He told the council that, over the six years since he was detained on Manus, twelve of his fellow inmates had died in the last month alone. And he explained how over 100 others detained there have attempted suicide.

Each day it gets worse and worse and I fear for the lives of hundreds of vulnerable people who are stuck in limbo on Manus Island and Nauru.

Muhamat was shortlisted for the prestigious 2019 Martin Ennals Award for human rights defenders. This honoured his work documenting what was happening at the Manus detention centre:

Muhamat won the award in February. He received “a temporary visa” which “allowed him to travel to Geneva for the awards ceremony”:

I feel honored to be announced the Winner of this year’s Martin Ennal Award. This is for all brothers and sisters on Manus and Nauru! Thank you to all of you

At the award ceremony, he told those assembled how his six years of incarceration only made him strong and determined to fight back:

Once in Switzerland, Muhamat was granted asylum:

Today am so grateful to say the Swiss have granted me asylum in their beautiful country. For the first time in 6 years am free, but I won’t be truly free in my heart till everyone of my brother and sisters on Manus / Nauru are free and well in safe country. pic.twitter.com/TSK1qLNmEK

Australian Govt attempted to hide us from international community & they spent nearly 15 billion but they failed. My role here’s to try to keep hope alive against a strong political machine designed to hide us from the world. After almost 6years we can say that we are not hidden. pic.twitter.com/qcfLrgC7m6

Around 500 refugees and asylum seekers are still detained on Manus Island. In June, a refugee held in detention at Manus set himself on fire.

Greg Barns and Anna Talbot of the Australian Lawyers Alliance are unequivocal about Australia’s responsibilities and previouslystated:

It is clear that Australia’s current approach breaks the commitments we have given. People are punished when they ask us for help. They are turned around in international waters, sent back to countries where some of them have been tortured or even killed, in direct conflict with our non-refoulement obligations. If they do reach Australia (and none have for quite some time), they are sent to places where a UN expert has said that the right to be free from torture and ill-treatment is being violated.

Meanwhile, Paladin – the security company tasked with managing the refugee detention facility on Manus – will not have its contract renewed. Instead, that contract is to be extended by six months. The decision not to renew the contract comes after Paladin faced allegations of fraud, money laundering and sleaze.

In a week of historic defeats and Parli punch-ups, one huge story has largely flown under the radar.
The Australian Financial Review has reported on an intriguing tale of a security contractor, a Kangaroo Island beach shack, and nearly half a billion dollars. #TheProjectTV pic.twitter.com/QmZdzqQzrT

The Australian government also faced criticism, in that it did not proceed with competitive tendering when awarding the A$423m Manus contract to Paladin. It’s understood that Paladin receives “$1,600 per day for each refugee and asylum seeker” – and that’s excluding “food or medical care”. The initial contract was awarded to Paladin after Broadspectrum pulled out, following a successful campaign by human rights organisations and refugee supporters targeting the company’s shareholders.

Australian lawyer Greg Barns, who acts for refugees on Manus, told The Canary:

The Paladin contract has been a disaster for the detainees on Manus. Paladin has failed to treat detainees humanely and effectively acts as jailers, enforcing a 6pm to 6am curfew. It is also typical of the contempt the Australian government has for PNG’s sovereignty that it extends Paladin’s contract at a time when new PNG prime minister James Marape clearly wants to find a solution to end the shame of Manus.

Barns also explained to The Canary that Marape is intending to go to Manus shortly. That could be highly significant, considering that his predecessor Peter O’Neill never set foot on the island.

In 2016, not long after the EU referendum, Channel 4 News ran a feature on Australia’s policy of intercepting refugees arriving by boat, only to lock them up indefinitely:

Australia under the spotlight

On 18 June, a group of UN experts demanded that Canberra provide full medical facilities for the refugees held on Manus and to transfer those who need urgent medical treatment to Australia. The experts added:

These individuals are subject to years of effective confinement in Australia’s custody, based solely on their migration status. The situation of their indefinite and prolonged confinement, exacerbated by the lack of appropriate medical care amounts to cruel, inhuman and degrading treatment according to international standards

But thanks to people like Muhamat, and direct action from refugee supporters across Australia, that cruel policy is now under the spotlight once again.