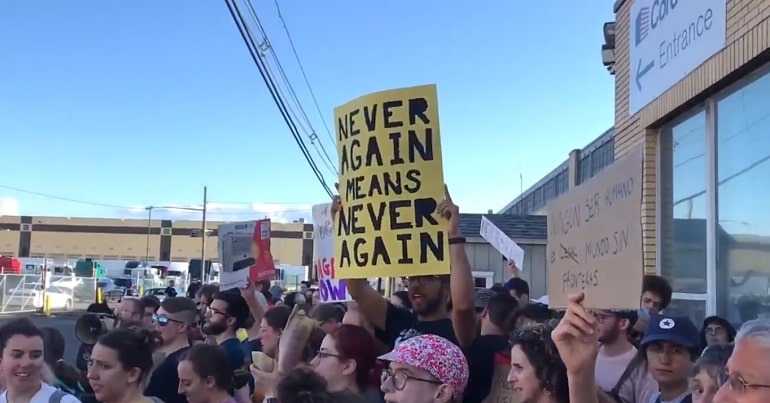 On 30 June, US police arrested over 30 Jewish activists protesting an Immigration and Customs Enforcement (ICE) detention centre in New Jersey. The activists, citing the Holocaust, said “never again” would they stand by while a government systematically abuses a minority population. They then blocked access to Elizabeth Detention Center, “preventing access to staff and visitor parking lots”.

On 13 June, detention expert Andrea Pitzer claimed that the Donald Trump administration is running “concentration camps” on the US border with Mexico. She explained:

We have what I would call a concentration camp system and the definition of that in my book is, mass detention of civilians without trial.

In response to the US government’s “cruel” detention policy, a group of Jewish activists under the banner of “Never Again Action” marched to an ICE detention centre to paralyse its operations. In a press release, the group wrote:

36 Jews were arrested shutting down the road that provides access to the detention center. The protestors sang Jewish prayers of healing and mourning to grieve for those who have fallen ill or lost their lives because of ICE and CBP’s [Customs and Border Protection] inhumane policies.

Tae Phoenix, one of the protesters, said:

Those on the ground shared videos of the protest on Twitter:

Hundreds of us just started our march to the Elizabeth Detention Center in New Jersey. We're going there as #JewsAgainstICE to stop them from continuing with their inhumane business as usual, because that's what #NeverAgainMeans. pic.twitter.com/42Wf8PVSZv

Breaking!!!
Young Jews with @NeverAgainActn are about to be arrested for blocking ICE building in solidarity with refugees and immigrants:
“never again means never again for anyone”#JewsAgainstICE #NeverAgainMeans pic.twitter.com/6KOYf3hozC

200 Jews are shutting down an ICE detention center because we when we say never again we 👏🏼 fucking 👏🏼 mean 👏🏼 it. #NeverAgainIsNow pic.twitter.com/iVBL6tv85z

She was the first on the blockade

And US congress member Alexandria Ocasio-Cortez – who has also been outspoken on this issue – showed her support for the campaign:

Also deserving of our attention and support: 36 young Jewish activists were arrested today for nonviolent direct action against migrant conditions in Elizabeth, NJ.

You can learn more about their advocacy and support their bail fund here ⬇️ https://t.co/oyoOJZdwh8

Trump’s persistent racism makes the US government’s dire treatment of asylum seekers somewhat easier to understand. But ICE detention camps did not begin under Trump, and were prevalent during the Barack Obama administration too. In this sense, it is important not to overlook Obama’s destructive legacy – which includes the bombing of Libya and the subsequent return of open-air slave markets in Africa.

Many of the asylum seekers at the US-Mexican border, moreover, have been displaced as a result of many decades of disastrous US intervention throughout Latin America. As The Canary reported in response to the ‘migrant caravan’ story in October 2018:

US interference [in Honduras] fits neatly into a story of countless CIA operations in Latin America, supporting coups and brutal right-wing dictatorships, and of vicious destabilisation campaigns which violated international law

As such, Never Again Action is leading the way in confronting not just Trump but longstanding, systematic racism from the US political establishment.