The right-wing media won't tell you one fundamental truth about the 'migrant caravan', so we will - Canary Workers’ Co-op 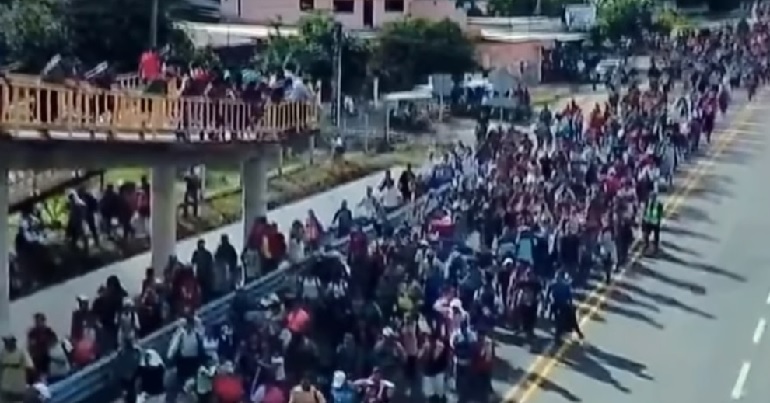 All eyes in the US are currently on a mass exodus of people from Central America, which is reportedly the largest on record. The so-called ‘migrant caravan’ has seen roughly 7,200 people come together to avoid abuse on the dangerous journey towards the US border. And if they arrive, few are likely to remain in the US after facing “sluggish bureaucracy or hard-line enforcement” from Donald Trump’s government.

This all comes just before important midterm elections in the US. So the right-wing media has exploded with lies and fearmongering about this caravan of people fleeing extreme poverty and violence. As has social media. And Trump has egged them all on. But there’s one fundamental truth these powerful chauvinist forces will never tell us: that this crisis is of their own making.

The US must take responsibility for its actions

As The Canary reported in detail on 17 October, US imperialism has a long history in Honduras (where local activists started the ‘migrant caravan’). And Washington’s support for a right-wing coup in 2009 was just the latest example of US disinterest in Honduran democracy and human rights. Because privatisation, repression, crime, and extreme poverty soon plagued the country; but the US propped up the coup regime, funding it generously. Emigration was a completely logical consequence.

And Honduras is not alone. US interference there fits neatly into a story of countless CIA operations in Latin America, supporting coups and brutal right-wing dictatorships, and of vicious destabilisation campaigns which violated international law. Today, Latin American countries the US disagrees with (because of their efforts to increase equality and social justice) face sanctions, smears, and other attacks; all while repressive political orders in countries friendly to the US (like Colombia and Mexico) receive support. In this environment, it’s no surprise that most of the world’s worst countries for workers’ rights are US allies.

These are the factors pushing people to flee from their countries. But there are also factors pulling them to the US. As CNBC insisted in 2017, there is massive demand for immigrant labour in the US (in jobs that Americans don’t want); the number of visas the government gives, however, is nowhere near enough. Immigrant workers are, it said, an “essential component of the agricultural business model”.

In short, if the US wants to bring illegal immigration to a near halt, there are two simple things it needs to do:

Instead of highlighting how US actions drive immigration, however, right-wing media outlets are exploiting people’s fear (and, yes, racism) for likely political gain:

Not a shocker, but the top performing stories containing "caravan" on Facebook in the last 24 hours come from:

And the Trump administration hasn’t been far behind. Because as usual, Trump is pushing conspiracy theories; suggesting people in the migrant caravan are criminals, “Middle Eastern”, or puppets of the Democratic Party:

As the US-bound migrant caravan continues to swell in numbers, President Trump has a number of ideas of where they came from: MS-13, Middle East, the Democrats… pic.twitter.com/uGgWGwb63K

Trump claimed on Twitter that “criminals and unknown Middle Easterners are mixed in”. He later backtracked from that apparent certainty, though, saying:

There’s no proof of anything. But there could very well be.

When all else failed, the president said “blame the Democrats”. But for anyone who looks into the roots of the crisis, it’s clear where the blame lies. And that’s right at the door of US imperialism.

– Read The Canary‘s previous articles about Honduras at The Canary Global.