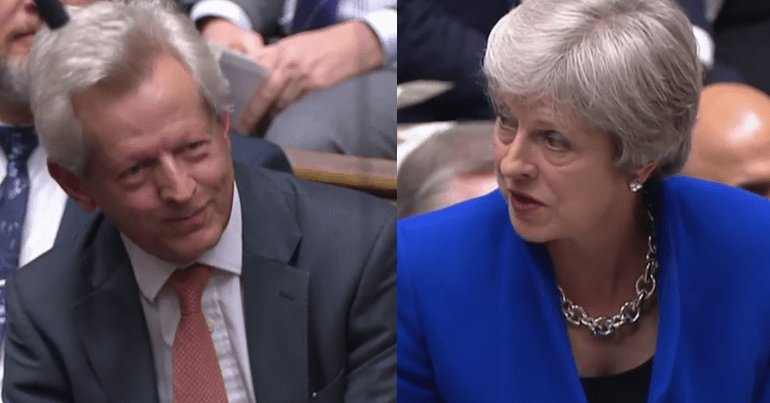 Cause for celebration? “A new centre for the homeless”

Mr Speaker, last week the shadow chancellor visited Gloucester saying that my constituency had suffered from austerity. In fact, Labour’s high unemployment has been slashed; investment, manufacturing and apprenticeships are strongly up; a new centre for the homeless – established… and a new Gloucester transport hub funded by the government opens tomorrow…

To state the obvious: Graham shot himself in the foot. We wouldn’t need more homeless centres in the first place, if not for Conservative austerity budgets. Since the Tories came to power in 2010, homelessness among people with mental or physical health problems, for example, is up 75%.

Yet the prime minister congratulated Graham on the new initiative, saying:

The thing is, it’s Conservative government policies that are causing homelessness. For a different approach, see the Canadian city of Medicine Hat, Alberta. The city has eradicated homelessness through a controversial policy: giving homeless people homes. As well as the positive impact of helping people, a “groundbreaking study” shows giving homeless people homes can save the taxpayer money. Shelters, emergency rooms, hospital beds and detention centres eat away at the public purse. The study also shows it benefits these people’s lives through putting them in a better position to face addiction and mental health problems.

By contrast, the Conservatives are celebrating the need for more homeless charities. Get them out of parliament, now.

At #PMQs, @theresa_may and @RichardGrahamUK used a pre-planned question to celebrate the opening of a new homeless centre in Gloucester. Unbelievable stuff. Homelessness for the most vulnerable people wouldn't be up 75% in the first place, if not for Tory austerity. pic.twitter.com/SuvyQoXcfB