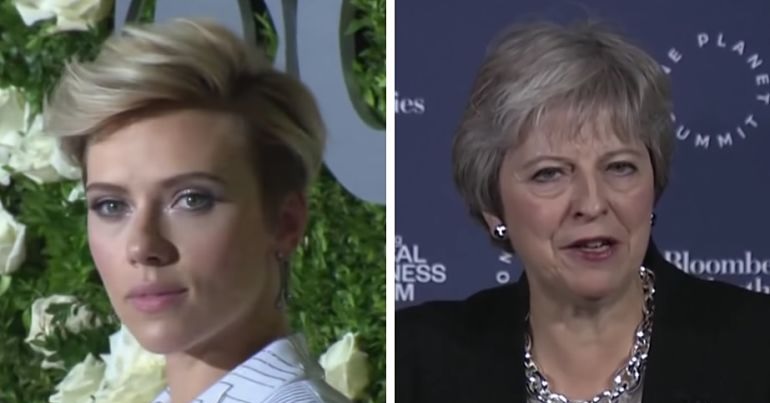 As one of the top-grossing actresses in Hollywood, and the highest-earning one globally, Scarlett Johansson is a power player. And she’s not letting that influence go to waste.

As the Intercept reported, she’s actually used it to veto the involvement of Saudi Arabia’s crown prince in a forthcoming Hollywood blockbuster. This is no small setback for Mohammed bin Salman, who’s been putting tons of effort into branding himself as a “great reformer”.

Johansson’s reaction to Saudi Arabia’s “charm campaign” couldn’t be more different from that of the UK’s top female power player: the prime minister. In fact, the Hollywood actor’s position puts Theresa May to shame.

The film in question is based on a memoir called It’s What I Do by Lynsey Addario. The memoir details the Pulitzer Prize-winning photojournalist’s extensive career documenting conflicts around the world. Addario has worked in numerous countries, including Palestine, Libya, Afghanistan, and Sierra Leone. The impact of conflict on maternal mortality is an area of particular interest for Addario. As she explains:

Many of the countries I was working in no longer had the medical facilities or professionals necessary to treat the population – from trauma injuries to chronic illness, or something as basic as maternal health… For me, as a visual storyteller, I felt compelled to capture this.

Johansson will play Addario in the movie.

During a conversation with the New York Times’s Nicholas Kristof on 23 October, the photojournalist revealed that bin Salman was originally going to be one of the “main funders” of the film. Saudi Arabia, however, currently stands accused of dismembering and murdering a journalist.

Addario claimed Johansson was unhappy with bin Salman’s interest in the project, though, saying:

Scarlett Johansson said absolutely not. She said: ‘This guy is perpetuating the war in Yemen. He has women in prison…’

Theresa May’s reaction to the ‘guy’ who’s waging the war in Yemen was a little different, of course. The UK government has approved at least £4.7bn in arms sales to Saudi Arabia since its bloody assault on the country began. It’s also done so against the wishes of its own citizens. And it entered into a secret ‘Military and Security Cooperation Agreement’ with Saudi Arabia amid the onslaught.

Meanwhile, the UK government seems to be taken in by the Saudi crown prince’s charm offensive. It, for example, appeared to accept the findings of an investigation into a “war crime” in Yemen that Saudi Arabia conducted into itself. After a story broke in August about the kingdom’s plan to execute a female human rights activist, foreign secretary Jeremy Hunt even praised Britain’s “close” relationship with the country.

Given its record, then, we don’t expect Theresa May’s government to follow Johansson’s lead on Saudi Arabia anytime soon.

This is one occasion for sure where many people will be wishing real life was more like Hollywood.

– Ask Theresa May and your MP to stop arms sales to Saudi Arabia.

– Join The Canary if you appreciate the work we do. And see more articles on Saudi Arabia at The Canary Global.