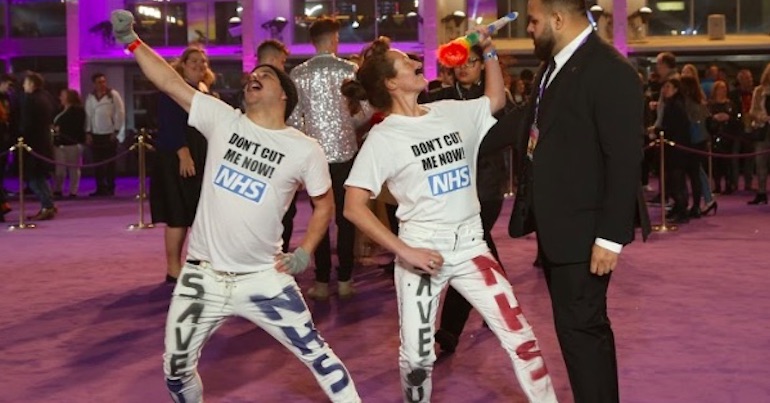 On 23 October, protesters occupied the purple carpet at the Bohemian Rhapsody premiere. The film is a biopic of iconic Queen frontman Freddie Mercury. But activist campaign groups Act Up Now and NHS Anti-Swindle Team drew attention to its glaring omissions about the reality of Mercury’s life.

Mercury died in 1991, only 24 hours after he publicly announced that he had AIDS. The film has already been criticised for “straight-washing” Mercury. As a press release from Act Up Now explained, the film:

has received a great deal of attention for its meagre perception of the huge contribution that sexuality, the AIDS crisis and the stigma associated had on Freddie Mercury’s life.

Activists wanted to challenge the “pacification and sanitisation” of Mercury’s life and the stigma caused by the “ongoing silencing of the reality of LGBT rights and HIV/AIDS”. It also raised awareness of ongoing NHS cuts. Specifically, the impact of these on people who are currently HIV positive. 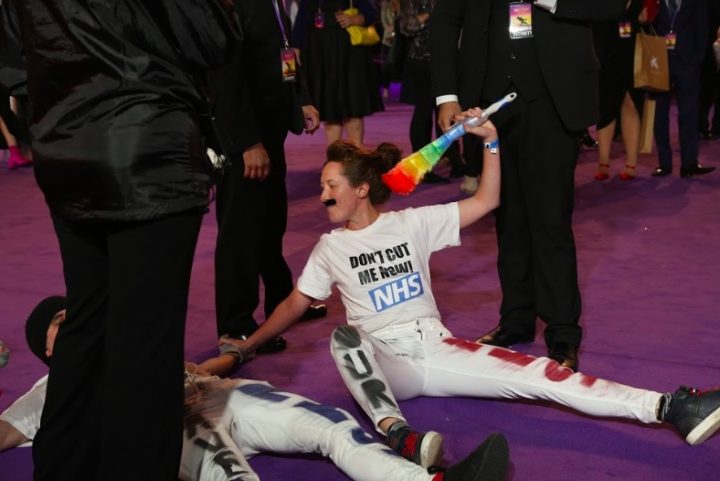 27 years after his death, Mercury is still an iconically powerful figure. As Dan Glass from Act Up explained in a press release, the situation for too many people living with HIV and AIDS is still critical. Act Up fights to “ensure comprehensive and easily accessible treatment for all people”. As well as medication, it also fights for “mental and social health services as well as housing and economic equality”. As Glass said:

In a time of continuing stigma, silence, and isolation, we combat discrimination against and promote the visibility and leadership of those living with HIV and AIDS….

Hywel ap Dafydd, from Act Up, explained a key fact about NHS cuts:

There’s a drug called PrEP which stops people from catching HIV but the NHS rations it so not everyone who needs it can get it. It’s disgraceful that the NHS denies people this opportunity…

Because as Han Smith from Act Up also stated:

Due to price gouging by greedy pharmaceutical companies, our NHS rations access to new medication for Hep C and HIV… [as] another sexual health service bites the dust. We want access to HIV and Hep C drugs for all.

Another aspect of Mercury’s life that is also too often overlooked is that he was an immigrant. As Jeremy Goldstein from Act Up said:

Farrokh Bulsara… professionally known as Freddie Mercury… was born in Zanzibar in 1946. The son of Parsis, he spent most of his childhood at boarding school in India. At seventeen he and his family became refugees fleeing from the Zanzibar revolution.

There was another vital and powerful reason for this protest, because as Goldstein also explained:

Freddie ‘Killer Queen’ Mercury was a migrant who died from AIDS and today HIV+ migrants are some of the most oppressed in the HIV / AIDS community.

This protest was planned to “highlight the ongoing crisis” and to:

demand that all HIV+ migrants are treated with utmost dignity, that HIV services stop being closed down and an end to all illegal detention of HIV+ migrants.

As Ray Malone from the NHS Anti-Swindle Team pointed out, this protest called “for support for all migrants and to make sure that everyone has access to PrEP in the UK”. We’re living, as Malone says, in the “midst of the biggest refugee crisis since the second world war”. So the “humanitarian principles that the NHS was founded on” are vital. As he explained, the NHS “is being eroded by the government’s toxic ‘hostile environment'”.

This protest was a spectacular tribute to Mercury. It touched on the aspects that made him such an iconic figure far more, it seems, than any slick film version of his life might ever do.

– Find out more about Act Up Now and NHS Anti-Swindle Team and support their vital work.

Featured image via Levi Hinds (Act Up Now) with permission