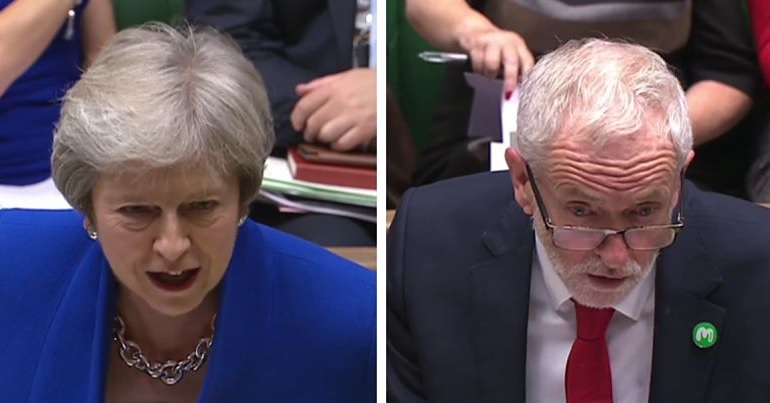 Books were all the rage at Prime Minister’s Questions (PMQs) on 24 October. After attempting to skewer Jeremy Corbyn with quotes from one called Economics for the Many, Theresa May raised another in her final line of attack on Labour.

It’s not the first time the PM has used this line. But unfortunately for her, the author of that second book has already slammed her for “distorting” what his book says. In fact, Philip Cowley did that the day before she trotted it out again at PMQs.

Generally, Corbyn and May jousted over money (i.e. austerity) during the session. Towards the end, the Labour leader reeled off a list of what he sees as failures by May’s government in the provision of public services. He also called for May to make the following promises in the upcoming budget:

more police on our streets, more nurses in our hospital[s] and elderly people in desperate need of care will not go ignored and forgotten by her government.

In response, May reeled off her own list of the government’s supposed achievements. She then said:

Let’s actually look at what we now know about what the Labour Party’s alternative is… we now see, as reported by a respected academic, that by their own admission Labour’s plans would cost one thousand billion pounds.

This statement drew vocal ‘wows’ from some MPs. May ended by accusing Labour of “taking us back to square one”.

‘Wow’ is the right response to this statement. But not because that’s a flabbergasting figure. No, May’s assertion was jaw-dropping because the “respected academic” she’s quoting outed her 24 hours earlier for “distorting” exactly that part of his book.

Writing in the New Statesman, Cowley highlighted that May used this same figure in her Conservative Party Conference speech; and again at PMQs a few weeks ago. Cowley writes:

I feel some responsibility, since I am fairly sure this is a result of a couple of lines in a book I’ve just published on the 2017 election.

Before this becomes established fact, it’s worth noting that this isn’t quite what the book says.

The author of The British General Election of 2017, co-written with Dennis Kavanagh, says that the 1 trillion figure comes from someone involved in preparing Labour’s 2017 manifesto. That person allegedly believed that the Conservatives could have “credibly claimed” Labour’s plan would cost that much if they’d been “a bit imaginative”.

However, the Conservative Party wasn’t imaginative. It couldn’t even manage to do calculations for its own manifesto, let alone some proper working out that would discredit Labour’s. According to Cowley, a Labour insider tasked with handling Tory attacks described them as “properly ropey”.

So that ‘credible claim’ never came during the election. May is, however, bizarrely trying to use it now, even though it has no grounding in fact. It essentially appears to be what a Labour staffer imagined were the lengths the Conservatives could go to in an attack, if they had the wherewithal to pull it off. But they didn’t. As Cowley points out, “in 2017 the Conservatives lacked both the rigour and the imagination” to do so.

May’s decision to keep droning on about this fake figure only reminds everyone of that. It’s a total own goal every time she uses it.