Theresa May brings props to help her. But then Jeremy Corbyn flips the script. - Canary 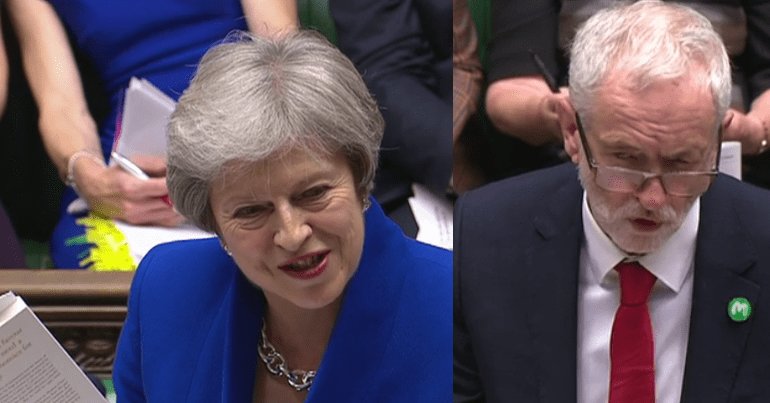 Theresa May brought props to help her at Prime Minister’s Questions (PMQs) on 24 October. But then Jeremy Corbyn flipped the script on the prime minister.

The Labour leader was questioning May about how cuts are impacting police, with the example of Staffordshire:

On Sunday, the chief constable Gareth Morgan said ‘sorry’ to his police colleagues and their families as they had to cancel rest days just to maintain the service. He apologised to his officers. Will the prime minister apologise to the police as well?

In response, May first drew attention to short-term spending increases (that in no way make up for years of police cuts). Then she began brandishing a book and attacking Labour:

I actually have a book here that’s edited by the shadow chancellor. And in an article by an economic advisor to the Labour Party… he says about their last manifesto that the numbers did not add up.

But Corbyn flipped the script on May:

Only one party costed their manifesto last election. And it wasn’t the Tory Party.

In 2017, the Conservative manifesto was unclear and uncosted. There was no indication of where the money would come from on major pledges, such as £8bn of funding for the NHS.

Meanwhile, the author of the chapter referred to by May, economics professor Simon Wren-Lewis, said that May “lied” and that he didn’t say that the “numbers did not add up”. Wren-Lewis was actually talking hypothetically.

The Labour leader then shifted the focus back to police cuts:

And for all she says about police, the reality is there are 21,000 less police officers than there were eight years ago. And she should listen to the chief constable of the West Midlands, who says criminals are taking advantage of these cuts. And I quote: ‘We are struggling to deliver a service to the public. I think the criminals are well aware of how stretched we are.’

West Midlands Police chief constable Dave Thompson also said that austerity budgets mean his force are not “pursuing crimes where we could find a suspect. We are doing things now that surprise me”.

Theresa May waves a book at Jeremy at #PMQs in a tragic display of pre-planned theatre. It’s time for the country to throw the book at Theresa May and her lousy, heartless Government.

Neither were others on social media:

Theresa May is clearly in denial over the damage she has caused to the police over the last 8 years. 21,000 officers gone, violent crime soaring and she refuses to apologise for the crisis she has caused. Simply unfit to govern our nation. #PMQs

Mike Bird, the Conservative leader of Walsall Council: “Never ever believe what you hear from central government, austerity is not over”.
Council budgets are being cut £1.3bn next year #PMQs

#PMQs Yet again, the Govt benches full of smirking, laughing faces when @jeremycorbyn mentions the poverty, inequality, destitution many have suffered during last eight years of #austerity and disaster of #UniversalCredit. Shameful.

Apparently the Prime Minister quoted me saying about Labour's 2017 manifesto "the numbers did not add up" In fact I said "Let us suppose the IFS was correct" and examined consequences. I have never taken a view on whether they did/didn't add up. If that is what she said, she lied

In parliament, May waved a book around in an attempt to distract from the impact of Conservative austerity on people who need support, the police, education, and the NHS. Yet, even on bean-counting, it was the Conservatives who didn’t bother to cost their manifesto in the last election. So Corbyn rightly flipped the script on May.

With the Tories in paralysis over Brexit, we need a general election.