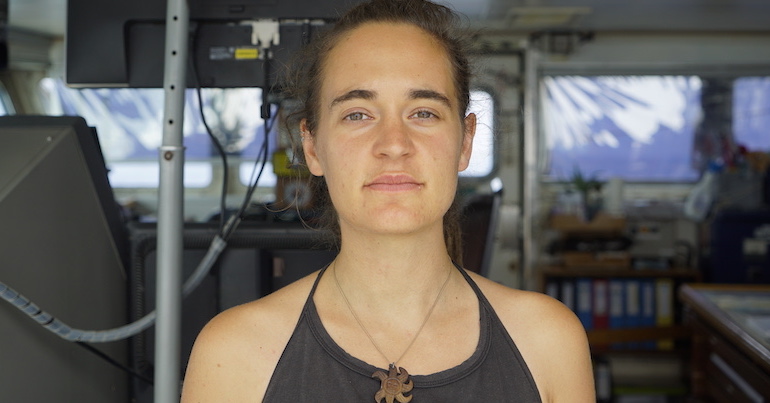 On 29 June, Captain Carola Rackete took 40 people to safety on the Italian island of Lampedusa aboard rescue boat Sea-Watch 3. But Italian authorities then arrested Rackete.

The Canary spoke to Dan Bebawi, one of the Sea-Watch crew, about the current refugee situation in the Mediterranean and Europe’s role in this ongoing crisis.

On 12 June, Sea-Watch 3 rescued 53 people from a rubber boat in international waters off the coast of Libya. According to Sea-Watch, the “so-called Libyan Coast Guard” made an “unprecedented attempt to make Sea-Watch complicit in a grave human rights violation”. It told the ship to illegally transport the survivors back to Libya. Italy’s interior minister Matteo Salvini, leader of far-right party the League, demanded Sea-Watch should follow these instructions. But even the EU commission stressed “the need to take rescued people to a safe place”. It also pointed out that “these conditions do not currently exist in Libya“.

Bebawi explained that, on 12 June, Salvini passed a new law. There’s now a €50,000 fine for boats carrying rescued refugees into Italian waters. A second ‘offence’ carries a €150,000 fine and the “confiscation of the ship”.

On 15 June, ten survivors disembarked on medical grounds. Another three people also had to be evacuated because of medical emergencies. The remaining 40 survivors included three unaccompanied minors. The youngest is 12 years old. So as Bebawi said, Rackete made the decision to get Sea-Watch 3 to port because of genuine medical and humanitarian concerns about the remaining passengers. Italian authorities left the boat “hanging on in territorial waters” as the physical and mental health of both survivors and crew deteriorated.

Bebawi said that Rackete decided “enough is enough” and that the ship needed to get to port:

🔵 Statement of our Captain, #CarolaRackete, before entering Port with the #SeaWatch3.

“We are proud of our captain, she did exactly the right thing. She upheld the law of the sea and brought people to safety." – #SeaWatch chairman Johannes Bayer pic.twitter.com/lfZ16Pq9F1

Rackete “declared a state of emergency” and asked the port to “make space”. Under maritime law, a captain’s decision in such situations carries absolute authority. But as Bebawi said, “instead they tried to obstruct us”. As a result, despite the crew entering safely, there was a “collision crash” with an Italian police boat that “authorities placed” between Sea-Watch “and the pier”. Rackete is now under “house arrest, we’ve got no contact with her, she’s not even allowed a phone”. And as Bebawi explained:

We know that we didn’t break any laws. In fact, it’s the opposite – they [Italy] broke a lot of laws by not letting us in… Salvini’s law is in conflict with international treaties… [Rackete] took a position that her authority takes precedence over any national laws because it’s about saving life and the safety of people.

“Mass murder on the border of Europe”

Bebawi also told The Canary that it’s vital to focus on “the fact that European states are breaking international law and removing people’s human rights… forcing people to drown”. “Therefore,” he continued:

they’re guilty of mass murder on the border of Europe. The decisions being made are not ‘an accident’. They’re 100% in control of the situation and 100% able to allow rescue ships to operate and save life. And they’re being called on to do that by all manner of humanitarian organisations… [including] the UN high commissioner. Everyone’s saying: ‘rescue ships should be empowered, not hindered’.

As Bebawi stated, despite “medivacs” for “people in the worst conditions” after the initial rescue, the crew became increasingly concerned about the other survivors. He said:

People share their stories once they’re on board and their histories. So amongst the crew and the medical team, there was a real fear of self-harm and suicide. For many people, this was the first time they’d felt safe for years. But that feeling doesn’t last beyond a week because people start thinking about the next stage in their journey. When it seems that they’re not welcome into a port, they think about what’s going to happen next. So tension and worry rises: 16 days is a long time of uncertainty on board a ship.

There are still 14 crew members on board. Bebawi said they’re “exhausted and emotional”.

It’s the same depressing situation where we are a rescue ship with a really motivated crew to do search and rescue. And yet, [Italian] law of state prevents us from doing that work.

Bebawi thinks that, although Salvini’s position is unlikely to shift, the legal process creates an “incredibly interesting situation” because:

A lot of people think we’re in the right. National laws don’t override international maritime law… It’s the responsibility of all ships to provide assistance to people at sea wherever possible. Every nation signed up to maritime law… has agreed that ships agree to [assist]… and take people to a safe place [usually] the closest port.

“They are willing to let people die”

Italy may refer to people as ‘migrants’; but first and foremost, as the UN states, these are people “in need of international protection”. Most who need rescue have fled civil war in South Sudan (which has killed at least 50,000 people – and possibly around 400,000 – since 2013) or the increasingly volatile political crisis in Libya. In the latter, warring militias reportedly ‘trade’ people as slaves for up to two years before they even make it on to a boat. As Bebawi previously told The Canary, “Libya is more terrifying than the sea”.

Yet as Bebawi also explained, saving lives doesn’t need “a huge input of resources” from Europe. He continued:

This is completely manageable, we could absolutely guarantee the safety of people leaving Libya. We could totally prevent a huge amount of death. You could even quantify the cost… if you want… You could put a price on it… But instead… they don’t want anyone to land in Europe. They are willing to let people die.

Sea-Watch 3 is currently “the property of the court” and stuck in port ahead of an investigation by Italian authorities. But as Bebawi said, it’s vital to: