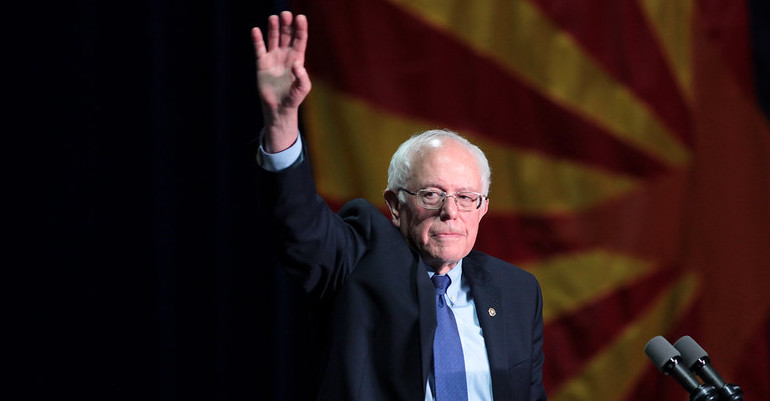 Bernie Sanders has won the New Hampshire primary. As the race for the Democratic nomination continues, this is a significant and major victory.

“Beginning of the end”

Sanders rallied his supporters saying this victory marks “the beginning of the end for Donald Trump”.

Our victory tonight is the beginning of the end for Donald Trump.

Although there’s still a long way to go, winning both Iowa and New Hampshire suggests Sanders should secure the Democrat nomination:

A Democratic Socialist just won Iowa and New Hampshire. No candidate in the modern era has ever won both states and failed to become the nominee. That should probably be the story rather than the person who finished 5th and then 3rd. Good night #risers! ❤️

“The reason I believe we are going to win,” Sanders said, “is that we have an unprecedented grassroots movement”. And he also acknowledged the crucial distinction in his campaign to secure the nomination and oust Trump. He said it’s:

an unprecedented, multi-generational, multiracial political movement. This is a movement from coast to coast, which is demanding that we finally have an economy, and a government that works for all of us — not wealthy campaign contributors.

We're not in this bc it's easy. We're taking on the Billionaires…and the candidates funded by Billionaires. @BernieSanders is now 2 for 2 and the ONLY candidate with the national operation and diverse coalition to take on Trump

Yet despite his backers, Biden only came fifth in New Hampshire. Although Bloomberg skipped it, there are genuine concerns he could still enter the race. That Sanders’ campaign directly challenges billionaire-backed politics is crucial.

Sanders also has huge support from younger voters, and this is something that shouldn’t be underestimated:

Bernie got more votes in NH from under 30s than every other candidate combined. Young people in the advanced capitalist world are swimming in endless debt. A life of debt with no assets & little prospects feels not worth living. The prospect of abolishing it is a genuine lifeline

However, despite Sanders’ victory, many establishment outlets led with headlines about Pete Buttigieg coming in second. Centrist Buttigieg seems set as Sanders’ main opposition. As The Canary reported, the media has fawned over Buttigieg since before he officially announced his bid for the presidency in April 2019.

This is unbelievable. The press bias against @BernieSanders is something that smacks of Orwellian totalitarianism.

This is not reporting. This is capitalism telling you not to pay attention to the socialist revolution that is sweeping the nation.

Now, the establishment machine looks set to attack Sanders in the same way it did Labour leader Jeremy Corbyn. The day after the UK election, Asa Winstanley warned:

The “Labour anti-Semitism crisis” strategy is already being rolled out across the Atlantic against anyone who challenges support for Israel or US imperialism. …

The Israel lobby and the Democratic Party right will use the anti-Semitism smear against Sanders and the left because it has been proven effective in the UK.

Others also pointed to the dangers ahead if Sanders wins the Democrat nomination:

Jeremy Corbyn's defeat in the UK General Election has emboldened Israel's supporters. Wait for the witch-hunt to commence if Bernie Sanders secures the Dems nomination to become POTUS. https://t.co/zin1fkHsYU

Looking ahead to the so-called Super Tuesday stage of the nomination process on 3 March, early analysis suggests Sanders is in a strong position to win. The establishment sabotaged Corbyn’s campaign and the chance for a socialist UK government, so Sanders now offers the best hope the left has to challenge the right on a global stage. It won’t be an easy run to win on 3 November, but Sanders’ New Hampshire victory offers real hope.