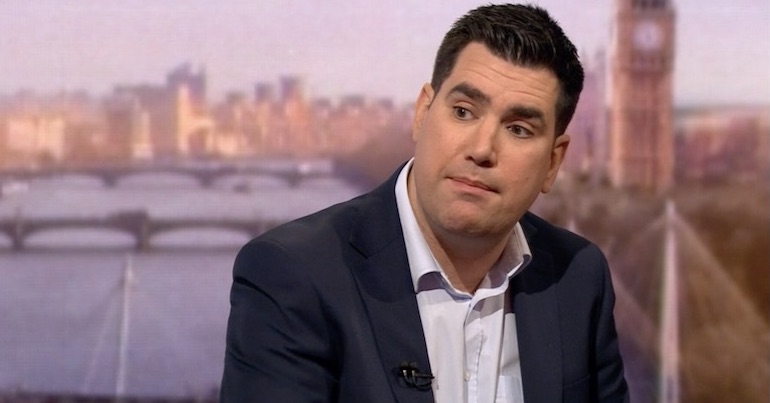 With the Labour leadership contest into its final phase, deputy hopeful Richard Burgon has upped his game again. From an effortless takedown of Tony Blair to keeping Jeremy Corbyn’s legacy alive, Burgon is giving the left hope.

Standing as the left’s deputy leadership candidate, Burgon’s commitment to socialist policies couldn’t be clearer. And speaking on the BBC‘s Andrew Marr Show on 1 March, the shadow justice secretary went even further. He started off by saying:

I want to defend… the three pillars of Corbynism: a democratic members-led party; an anti-austerity, pro-public-ownership party; and an anti-war, internationalist party.

And despite Marr trying to needle him about the 2019 election result, Burgon didn’t falter. After acknowledging the role of Brexit in the recent election, he took down the establishment narrative with utter clarity, stressing that:

it wasn’t our socialist policies that caused us to lose the general election. …

the right-wing press upped its game when it came to the demonisation of a decent man in Jeremy Corbyn.

if it hadn’t have been for the disloyalty and disgraceful behaviour by members of the Parliamentary Labour Party in 2016, we’d be three years into a Labour government now. Three years into scrapping tuition fees… into people getting paid £10 an hour minimum wage. Three years into building 100,000 council homes a year.

In 2016, Starmer backed Owen Smith in the unsuccessful coup to oust Corbyn.

This morning I discussed my vision for Deputy Leader on #Marr. Watch the full interview here👇 pic.twitter.com/yB7QhvAnfj

Burgon also pointed out that he’d be loyal to whoever wins the leadership contest. “But, whoever is elected as leader of the Labour Party,” he explained, “they won’t have a mandate to ditch a single socialist policy”. He also emphasised that, above all else:

I’ll be loyal to Labour Party members. I’ll be a voice in the shadow cabinet, and hopefully in the cabinet, for Labour members and trade unions.

Later in the interview, when Marr tried to champion Tony Blair, Burgon’s takedown was effortless.

If elected as deputy, Burgon has proposed opening a Tony Benn School of Political Education to create a “revolution in political education”.

As Marr tried to pick holes in this idea, Burgon stayed calm. But when Marr asked if Blair would be welcome to speak, Burgon replied, “he’d be welcome to come and learn”. No, “to lecture”, Marr insisted. But Burgon wasn’t having any of it, stressing:

I know that Tony Blair introduced tuition fees. He could come and study for free.

Clearly not the response Marr expected. But for all those who despise Blair’s New Labour legacy, it was the perfect response.

Andrew Marr’s rehearsed attack on Richard Burgon’s new policy for a Tony Benn University did not go how Andrew planned it to. pic.twitter.com/twMgPxXvb4

Keep to the left

According to the latest Survation poll, Starmer is leading the race for leader and Angela Rayner‘s ahead as deputy. But for all her talk of socialism, it’s impossible to forget Rayner’s recent attack on Corbyn.

Let’s not forget, meanwhile, that Burgon has boldly refused to sign up to the draconian demands of the right-wing Board of Deputies – a list that other leadership and deputy leadership candidates have capitulated to.

Burgon is currently in second place to win the deputy nomination. So he’s also the frontrunner in offering hope for the millions of members who supported Corbyn’s Labour. And that’s a hope worth keeping alive.