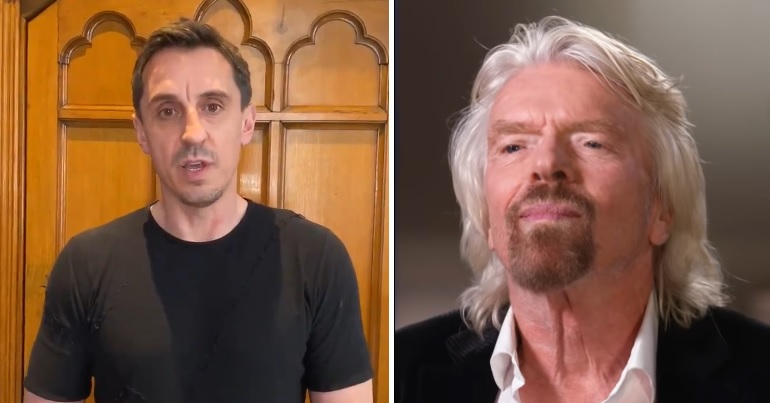 Neville has announced that he and ex-team mate Ryan Giggs are closing their hotels and handing them over to the NHS during the coronavirus (Covid-19) outbreak. Neville has also confirmed staff will not face unpaid leave as a result of the closures.

Compare that to Branson. Virgin Hotels, which operates in the US, has confirmed that its San Francisco hotel will close its doors. But, in the announcement of the closure, there was no mention of offering the premises out to emergency workers or another good cause. Meanwhile, Branson’s Virgin Atlantic airline reportedly plans to make its staff take eight weeks unpaid leave during the crisis.

Branson proudly calls himself a “philanthropist”. However, his companies’ prior actions – such as suing the NHS over a contract Virgin Care lost out on – have called his propensity for generosity into question. His companies’ latest actions do nothing to bolster his philanthropic credentials either.

It was widely reported recently that Virgin Atlantic asked for the airline industry to get £7.5bn in credit facilities from the UK government. That’s alongside allegedly trying to not pay staff for eight weeks. Meanwhile, Virgin Hotels announced the closure of its San Francisco premises, with no mention of how it could be put to use for the public good:

Virgin Hotels has made the difficult decision to temporarily close @VirginHotelsSF. We feel we have a responsibility to the community, our teammates, their families and to our hotel guests to reinforce + follow recommendations on the appropriate health & safety measures. pic.twitter.com/mw0nD2PyzA

In contrast, Neville announced that the two hotels he co-owns with Giggs will be closed too. But during the closure, he said they’d be handed over to NHS workers and medical professionals. He also pledged that hotel staff will “retain their income” during the closure:

A message from our co-owner Gary Neville. @GNev2 @GG_Hospitality pic.twitter.com/uy2rEfweho

Furthermore, Chelsea Football Club has promised to pay for NHS staff to stay for two months or more at the Millennium Hotel, part of the club’s Stamford Bridge stadium complex.

The stark difference between Branson’s response to the crisis and that of other wealthy individuals did not go unnoticed:

So a man with an actual spaceship and private island tells his staff to take unpaid leave to save his business is now bemoaning that the UK government won't give him a handout. How about you fuck off @richardbranson

I agree with Labour's John McDonnell
"I resent Richard Branson urging his workers to go for 8 weeks of unpaid leave, when he makes such a fortune often by tax avoidance as well"#ToryBritain #CoronaVirusChallenge#Corvid19uk #CoronaVirusChallenge pic.twitter.com/YfOHb0zmzj

People are saying they won’t forget how Branson’s businesses behaved amid this crisis once it’s over:

Round of applause here! People who can afford to help should help! Richard Branson is a shit house and the people wont forget! https://t.co/WHAlhhrTmg

@richardbranson and other multi billionaires take note.
We will not forget what the likes of @GNev2 and hotels like @hotelfootballuk have done for people trying to get through this.
We will not also forget these greedy billionaires sitting on there fortune whole people go without https://t.co/7iDGumpC7r

How governments, organisations and individuals behave in a crisis speaks volumes about who and what they are. That applies to companies too. Branson and his companies have made themselves deeply unpopular in Britain due to their behaviour during the coronavirus outbreak. When it’s over, let’s hope people ensure Branson’s enterprises reap what they’ve sown.