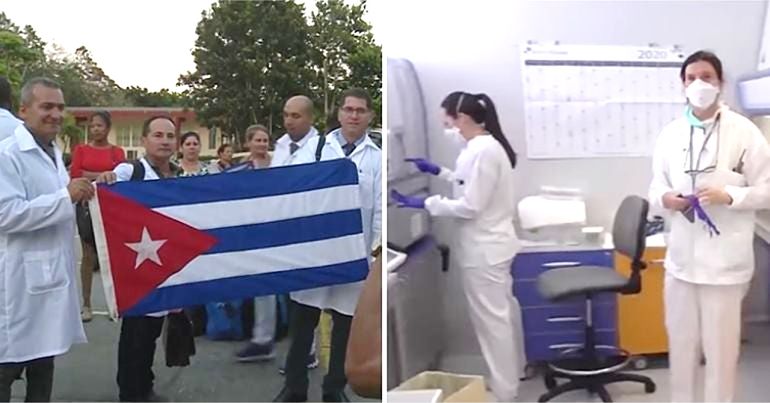 On 22 March, over 50 doctors and nurses from Cuba arrived in Italy to help tackle the coronavirus (Covid-19) pandemic. Italy has recorded more coronavirus deaths than any country in the world. Whereas Cuba, according to recent statistics, has reported just one death.

And there’s a further bitter irony. Italy, like the UK, is a member of the wealthy “Group of Seven” (G7) industrialised nations of the world. Cuba on the other hand is ‘a poor country’ severely impacted by decades of US embargoes.

Yet for some reason, a country like Cuba seems capable of offering help to the overwhelmed healthcare system of a wealthier country. And in doing so, the Cuban system also serves as a stark reminder of the damage done to the NHS as a result of ‘brutal Tory cuts’.

When these doctors and nurses arrived in Italy, they received a great welcome:

Doctors from Cuba arrive in Italy to help the fight against Covid-19.

Please keep these heroes, their families, and loved ones in your prayers 🙏🏽🤲🏽❤️ pic.twitter.com/idNnom8sXS

So some people took to social media to acknowledge why they had to come:

In one of Italy’s darkest hours, they find they are not alone. Cuban doctors arrive in Italy with one mission, to save as many lives as they can. pic.twitter.com/K7r3DWqy8r

Cuban doctors arrive in Italy with one mission, to save as many lives as they can.pic.twitter.com/wZ8BULMFyM

Meanwhile this Bernie Sanders supporter contrasted their arrival with Joe Biden’s attack on Sanders for his defence of the Cuban education system:

Remember it was just last week when Biden was shaming Bernie over his praise of Cuba's education system.

Today, a group of Cuban doctors arrive in Italy to help where they are hit hard with #coronavirus. Viva! 👏❤️ https://t.co/4AS0zRh9MV

While US president Barack Obama eased his country’s embargo against Cuba, president Donald Trump made it harsher. But even with an embargo in place, the World Health Organisation (WHO) still praised Cuba’s healthcare system. And prior to this, in its ranking of countries with “the fairest mechanism for health-system finance”, the WHO placed Cuba ahead of other Latin American countries and the US.

This time of crisis

This isn’t the first time Cuban medical teams have responded to an international health crisis. They were also on the front line in the fight against Ebola in West Africa and cholera in Haiti. Additionally, Cuba has a drug – Interferon alpha-2b – that could be used in the fight against the coronavirus. China has used it and now the Irish government is considering doing likewise.

Years of Tory austerity have done untold damage to the NHS. This damage, along with Tory budget cuts, has ‘undermined patient care’. And now in a time of great crisis, we can see successive Cuban governments may have got their priorities right. It put its people’s health first.

There’ll be many lessons in this pandemic and sadly many losses. But maybe a positive would be to learn a lesson from Cuba, and invest in what really matters.