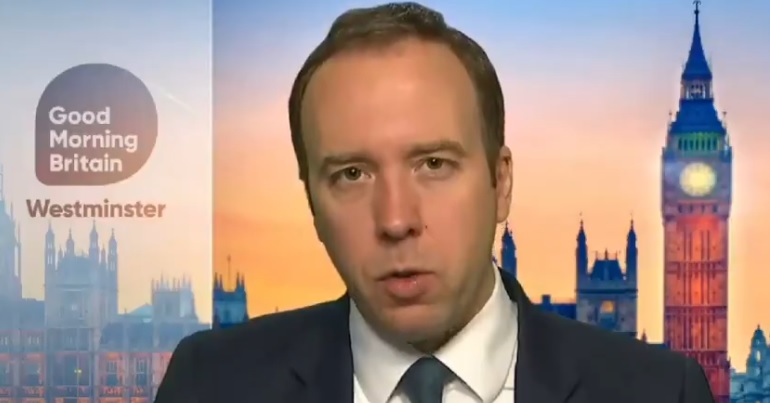 Health secretary Matt Hancock appeared on ITV‘s Good Morning Britain on 23 March. During the interview, he faced the dressing down of his life over his ‘insulting’ comments on the government’s strategy for handling the new coronavirus (Covid-19).

Earlier in March, government officials repeatedly spoke about “herd immunity” in relation to the disease. This notion means allowing the disease to spread to some degree so the population – or ‘herd’ – builds up an immunity to it. It’s been a talking point for officials at press conferences and in TV interviews. Even Boris Johnson himself floated the ‘theory’ of building herd immunity to tackle coronavirus on TV, concluding that “we need to strike a balance”:

Most recently, Number 10’s chief adviser Dominic Cummings stands accused of callous comments on potential coronavirus deaths due to the herd immunity policy. According to the Sunday Times, Cummings described the government’s strategy at a meeting in February. People present at that meeting characterised his description as:

herd immunity, protect the economy and if that means some pensioners die, too bad.

Cummings – "Protect the economy & if that means some pensioners die, too bad"#GMB #COVIDー19 pic.twitter.com/RUfZ6FQipX

Hancock said, despite all the evidence to the contrary, that:

Herd immunity has never been the strategy

Presenter Piers Morgan raised the allegations against Cummings. Morgan also broadcast comments made by the government’s top scientific adviser, Patrick Vallance, during a BBC interview where he spoke about building herd immunity in the UK.

The presenter told Hancock “don’t insult my intelligence” by suggesting the new, changed strategy of the government is how it’s always been.

As people noted, the interview was a car crash for Hancock:

I'm retweeting Piers Morgan positively. Who knew it would come to this? https://t.co/0IO6wIzLGx

It should, however, surprise no one that Hancock is trying to convince people that herd immunity has “never” been part of the government’s strategy. Britain’s establishment is no stranger to rewriting reality to suit its own ends. But herd immunity most certainly was a part of the government’s plans. And Morgan just gave Hancock the dressing down of his life for trying to convince people it wasn’t.