Five rich people who are not handling the coronavirus crisis well... at all - Canary 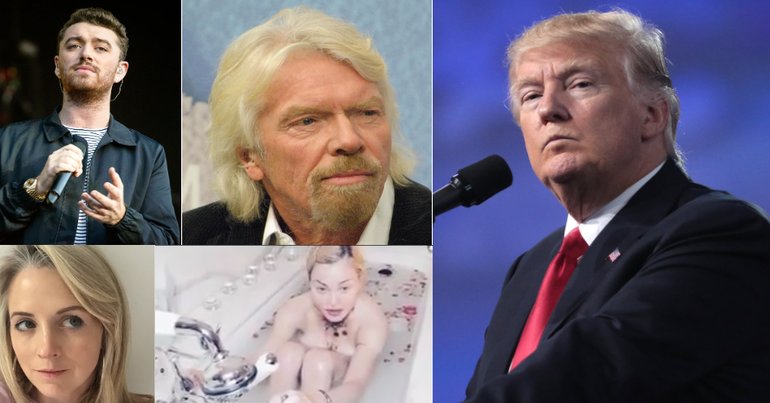 One might think that a full bank account, secure mansions, and private islands might keep the rich sane through the coronavirus (Covid-19) crisis. But unfortunately, we’re seeing meltdowns from the most pampered among us. Here are just five examples of rich people entirely failing to adult through the pandemic.

Oh, Madonna. Holding forth on the coronavirus making us all equals, from your rose-petal-adorned milk bath, while a harp plays in the background? This is batshit behaviour:

Pretty sure the besieged inhabitants of the Gaza Strip have it tougher than you, babe.

But fans and critics alike were begging Madge to exercise a little self-awareness. 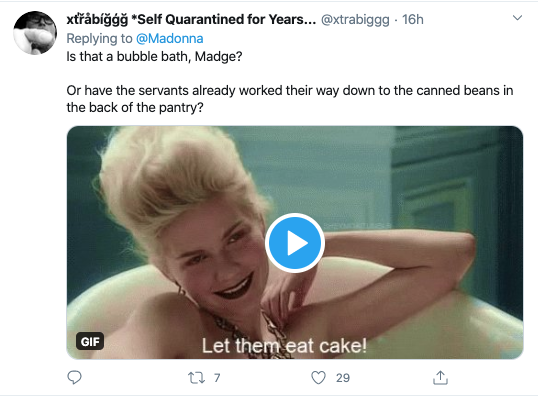 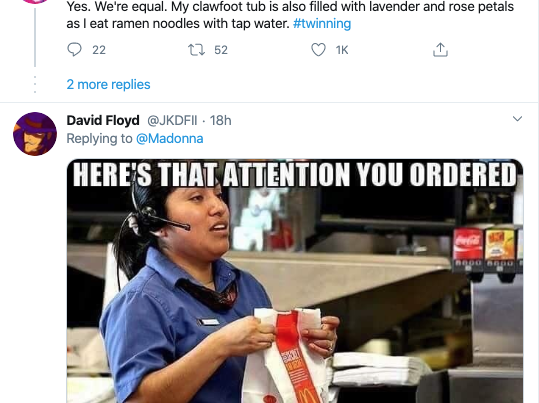 2. Branson in a pickle

Richard Branson’s fortune was estimated at $4.1bn as recently as January this year. And his Virgin Group company brings in over £16.6bn a year. Despite this, Branson asked Virgin Atlantic staff to take eight weeks of unpaid leave while they self-isolate and social distance. The average Virgin Atlantic flight attendant earns just over £15k a year. Going eight weeks without pay is simply not an option.

Branson could pay every one of Virgin Group’s 69,000 employees £2,000 for the next two months himself for £27.6m. This wouldn’t even dent his personal fortune. Instead, he’s asking skint staff to bailout his company with their own confiscated salaries.

As if this wasn’t insulting enough, Branson also urged the British government to give his industry a £7.5bn taxpayer bailout.

In short, while Branson and Virgin Group’s fortunes remain untapped, Virgin staff and the taxpayer keep his company afloat.

No, Richard. Just no.

Richard Branson (worth £4billion) asks his staff to take 8 weeks’ unpaid leave. My Dad (a small business owner and full time carer to my disabled Mum) promises to continue paying his staff and won’t pay himself while the business struggles. A crisis shows people’s true colours 🙌🏼

Gary Neville has said his hotels will not make any redundancies and none of his staff need to take unpaid leave. He is going to hand his staff over to the NHS for extra capacity 👏

Roman Abramovich and Richard Branson; the tale of two billionaires. One of them is being philanthropic in a time when it’s needed most and the other is asking his staff to take unpaid leave and is asking the government for +£7 billion to bail out his airline. https://t.co/gjxkyl8Lyb

The pandemic has hit young people, teachers, and parents hard. Students about to sit critical exams have had them deferred indefinitely. Teachers are moving out of their family homes in order to reach the children of key workers while keeping their own families safe. Parents are having to manage work and home-schooling their children. And for some families, all these things are happening at the same time. It’s tough.

And yet, rich people ‘problems’ are still a thing. Wealthy journalist Isabel Oakeshott asked us to spare a thought for her fellow wealthy parents at this difficult time:

Not the most considerate post at a time of national crisis. The response was justifiably withering: 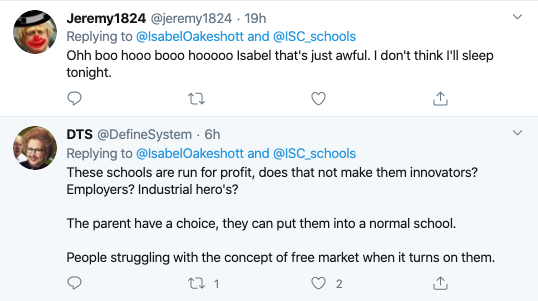 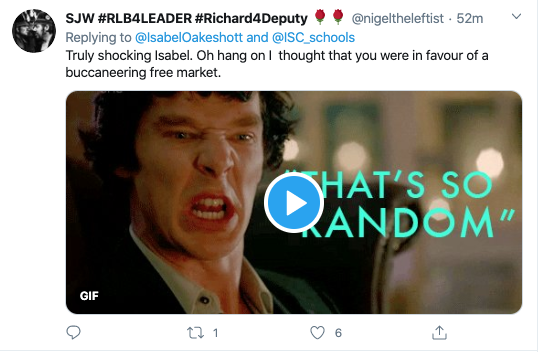 Billionaire US president Donald Trump interrupted his press conference on coronavirus yesterday to bemoan the life of the billionaire. In a bizarre rant that went on for minutes, Trump complained about how tough it is for rich people to run for office:

Now your turn – "It's more costly for rich people to… pic.twitter.com/a8NA8axAdX

Only one US president since 1929 was not a millionaire – Harry Truman. And Trump is the wealthiest president in US history. This would suggest that wealth is a help rather than a hindrance to power in the United States.

Yes, this is a direct quote.

At press conference that’s supposed to be about the Coronavirus pandemic, Trump laments how much money he’s lost as president: “I think it’s very hard for rich people to run for office.”

“Nobody said ‘thank you. It’s very hard for rich people to run for office.” – @realDonaldTrump Yeah the rich really have it tough. Maybe all Americans who are scared shitless now could kick in a few bucks to help you out. Oh, right that’s what the GOP bills does. You’re good here

Singer-songwriter Sam Smith has a net worth of $40m (£34.35m) and is spending quarantine in their £12m mansion in North London. So when they took to social media to share their ‘quarantine meltdown’, Brits were not amused.

Sam Smith has multiple tens of millions of dollars. A “relatable” hero he is not. Instead he’s a whiny brat who can quarantine in luxury as others around the globe lose the income they need to survive as they share cramped living quarters with roommates/family.

On the left is Sam Smith, having “meltdown” because he is in quarantine in safety of his multimillion home.
On the right are women with their newborns who should be in quarantine, but are forced to leave the hospital due to today’s earthquake. #earthquake pic.twitter.com/3ftNVcMhaz

As a rule, if you’ve got a big house, food in your fridge, and healthy lungs right now, stop complaining. Or as one particularly articulate US citizen put it on Twitter:

To rich folks in mansions posting about how restless & bored you are here is some FREE advice:

The income disparity between the richest & poorest Americans is the highest it’s been in a half-century.

Nobody gives a shit if you’re bored. People are desperately trying to survive.