Trump's attack on the Affordable Care Act shows he's out of touch. And it's backfiring spectacularly. - Canary 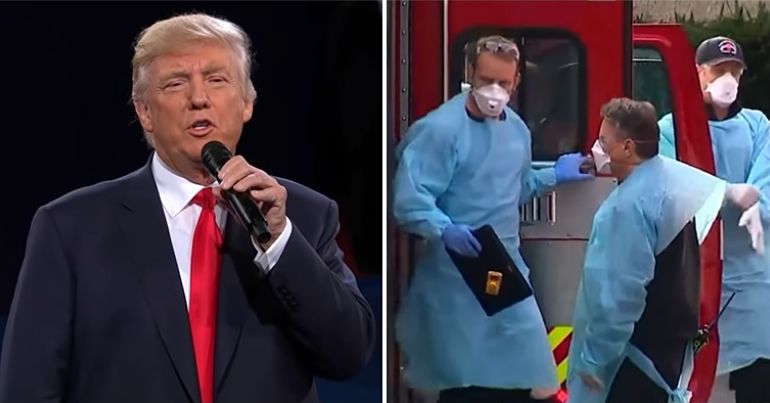 Despite being in the grip of a global health pandemic, US president Donald Trump is attacking US healthcare. He’s reaffirmed his intention to challenge the Affordable Care Act (ACA – ‘Obamacare’):

Absurdly, in the middle of a pandemic, Trump is fighting in the courts to end:

Today is the ten-year anniversary of the ACA, and I will be damned if we let Trump repeal it. https://t.co/tOvcnAjWZm

President Obama enacted this healthcare reform in March 2010. Many US Republicans have been opposed to it since it became law. So Trump’s opposition is in keeping with that line. But University of Minnesota political science professor, Lawrence Jacobs, argues it’s also a tactic:

Trump is playing to the conservative base and the idea that these are kind of big socialist programs that need to be taken down.

But as we’re all grappling to deal with the new coronavirus (COVID-19) pandemic, Trump’s playing a very dangerous game. Judging by the reaction online, people aren’t taking it. Like Trump, they’re also calling for change to healthcare. But they’re calling for the kind of change Bernie Sanders would bring.

There was a swift reaction to Trump’s attack on the ACA on its tenth anniversary. Many people do want to replace the ACA, but they want a real improvement. Something like Bernie Sanders’ Medicare for All. So they fear what could come from Trump’s lawsuit:

He will decimate our country. That’s his goal. Then he will walk away and attack us the rest of his life about how we can’t fix the destruction he caused

Democratic presidential hopeful Joe Biden, who was Obama’s vice-president at the time of the ACA, condemned Trump’s lawsuit:

As this public health crisis rages, with the economy in peril, and with front line workers putting their lives at risk — Trump and Republican Attorneys-General are attempting to strip health insurance away from millions.

No more games. Drop this lawsuit. Save lives. pic.twitter.com/aSgzVzOvlV

As did speaker of the House of Representatives Nancy Pelosi:

As we mark the 10th anniversary of the Affordable Care Act, I call on the President to drop his lawsuit attacking Americans’ health care. We should be fighting to ensure more people have access to quality care, not doing the opposite. #ProtectOurCare pic.twitter.com/LC6QS8SroY

It offered health insurance cover to US citizens who previously had none. It also protected those with pre-existing health conditions. ACA has, however, been criticised for making insurance companies richer, partly because they can set deductibles. Deductibles (like an ‘excess’) are the amounts people must pay before the policy takes effect. And deductibles can be higher than those of people who get health insurance through work. Hence the need for Sanders-style change.

So if there’s to be any change to the ACA it needs to be in the Sanders direction. Because his Medicare for All would go well beyond the limited ambitions of the likes of Biden and Pelosi and provide US citizens:

with comprehensive health care coverage, free at the point of service.

It also promises to ensure:

There appears to be widespread support for the plan Sanders has championed. This is particularly so in the teeth of the coronavirus pandemic:

Half of Americans support Medicare for All amid the coronavirus pandemic, new poll finds https://t.co/JyNWRv0Iiw via @businessinsider

Austerity kills. Public healthcare systems were starved to the bone long before this crisis. As many in the U.S. fight for Medicare for All, let's also be clear that universal public systems have to be fully, generously + consistently funded – or else they aren't universal.

It’s at times like these that we see what our leaders are made of. But it’s also when we see what ordinary people are made of. If any good can come from this crisis, it would be leaders listening to and answering the people’s demand for a proper healthcare system. Trump’s getting this one classically wrong.