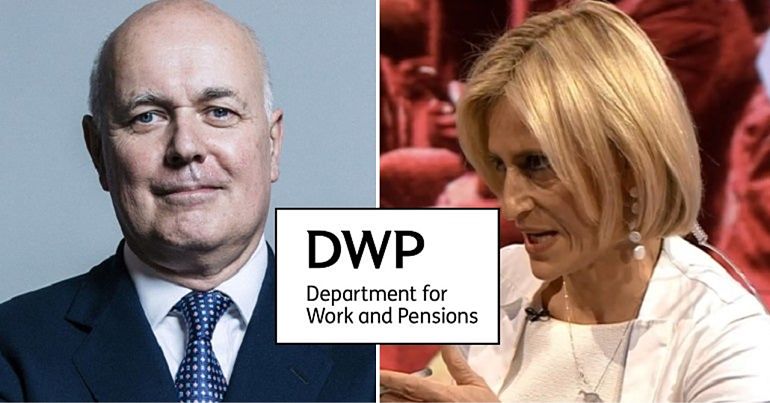 The ex-Department for Work and Pensions (DWP) boss has managed to whitewash the chaos around Universal Credit in the face of the coronavirus (Covid-19) pandemic. He even went further, maintaining that the beleaguered benefit was still working. But the evidence emerging tells a different story.

Tory MP Iain Duncan Smith was work and pensions secretary from 2010-2016.  He and his thinktank, the Centre for Social Justice, came up with the idea of Universal Credit. Duncan Smith then put it into practice. But the benefit has been constantly mired in scandal, from taking bonuses from Greggs staff to the DWP not knowing if it causes poverty. The issues with Universal Credit led UN special rapporteur on extreme poverty Philip Alston to call it “Universal Discredit”.

But coronavirus has put Universal Credit’s problems into even sharper focus. As The Canary previously reported, the DWP’s response to the pandemic is riddled with dangerous faults. Not least among these are:

Labour MP Debbie Abrahams summed it up by saying:

People on social security were already suffering before the Coronavirus pandemic.

And as writer and Universal Credit claimant Alex Tiffin tweeted:

"There's meant to be a safety net" someone tells @LBC.

UC being broken isn't some sort of revelation. It's been a beta website for 7 years

Yet despite this, when Duncan Smith was on BBC Newsnight on Tuesday 24 March, he acted like nothing was wrong.

The show’s host Emily Maitlis asked what many people are thinking about Universal Credit. She put it to Duncan Smith:

We’re seven years on from Universal Credit, and I’m wondering whether you think that we will now look very differently at that, going forward. Because Universal Credit is one of those problems that has driven people to destitution; it’s taken years to roll out; it has been horrendously complicated.

And now, with this crisis, we’ve shown in a matter of days or weeks, how simple it is to make the kind of gesture that can really help people’s lives, quickly. Would you concede that there is no way back to a system like Universal Credit after this?

No prizes for guessing what Duncan Smith’s response was: complete denial.

No… absolutely wrong. The thing about Universal Credit is that it is more flexible than any of the previous benefits.

But Maitlis wasn’t having it. She interrupted him, saying:

I’m just wondering whether you don’t look at where we are know, and say the government has managed to do something comprehensive, and big, and generous – and many people will be wondering why on earth it couldn’t have done that seven, eight years ago.

Duncan Smith deflected. He said that putting more money into Universal Credit for claimants was a “policy decision”. But he also maintained his defence of the benefit itself, saying it is:

flexible to… [allow] any amount of money you want to put through it, and you can target it, that’s how it’s designed.

Aside from the fact that it was many of his ‘policy decisions’ that stripped £37bn from welfare spending, Duncan Smith’s unflappable defence of Universal Credit beggars belief. Time after time, charities, groups and government watchdogs have criticised the benefit. Not because of policy decisions, but because the design and roll out itself is inherently flawed.

Now, the chickens of this flawed system are coming home to roost due to coronavirus. For example, the system itself is overwhelmed with new applications, with some people reportedly being put in a virtual queue consisting of tens of thousands of people.

Universal Credit was a shambles before coronavirus. Now, it’s proving to be disastrous. No amount of wilfully ignorant defence from Duncan Smith will whitewash that. And no amount of lip service can change the fact that after the pandemic is over, yet more serious questions need to be asked about this most toxic of benefits.