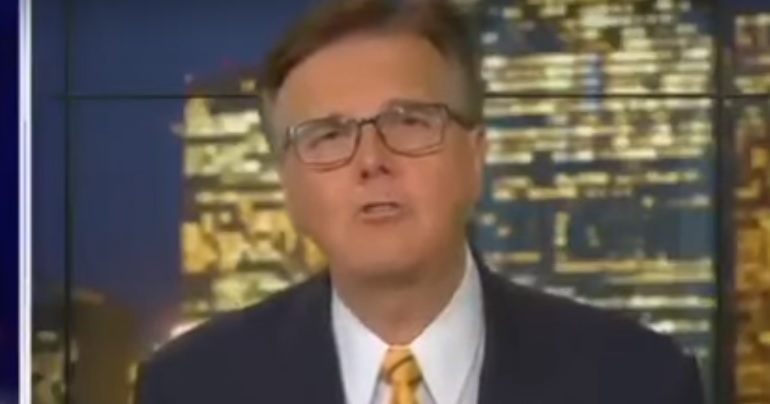 One right-wing US politician has given what must be one of the worst takes on the coronavirus (Covid-19) pandemic so far. And it sums up the moral bankruptcy of hard-line capitalists perfectly.

A senior US Federal Reserve official said on 22 March that the country’s unemployment rate could reach 30% due to coronavirus shutdowns, with gross domestic product potentially halving. With this situation in mind, Texas lieutenant governor Dan Patrick spoke to Fox News about his fear of “total economic collapse”. And he seemed to think risking more lives was a price worth paying to protect the economy.

Patrick said he doesn’t want “the whole country to be sacrificed” (i.e. the economy) in order to save lives. So he called for the US to “get back to work”, stressing:

those of us who are 70+, we’ll take care of ourselves. But don’t sacrifice the country.

So you’re basically saying that this disease could take your life, but that’s not the scariest thing to you? There’s something that would be worse than dying?

Patrick answered “yeah”. And he also clarified that “it’s worth whatever it takes to save the country” (i.e. the country’s capitalist economic system).

Texas Lt Gov Dan Patrick went on national tv & argued elderly people should die for the health of the market. Capitalism is a system that priorities profits over people. This fight is literally a matter of life or death. Battle lines are being drawn. Which side are you on? pic.twitter.com/GI3LQZG7uo

There’s been a lot of talk among the US right about prioritising the economy over the fight against coronavirus. But as Hill reporter Krystal Ball has clarified, this is a false choice. Because it’s perfectly possible to protect people’s finances and fight coronavirus at the same time. And Ball exposed the propaganda of political and economic elites, stressing:

They would have you believe that the only options are to starve or to take your chances with coronavirus… Even as trillions were instantly freed up to feed the stock and the bond markets.

What the Wall Street ghouls and Trump and his right-wing sycophants want you to believe is that listening to the sound advice of public health officials necessarily means economic calamity for workers. It doesn’t. If they put half as much time and attention and care into bailing out workers as they do into the stock market, we’d all be able to get through this just fine.

On 12 March, US stocks crashed, and the New York Federal Reserve quickly announced it would be injecting around $1.5tn into the financial system.

As presidential hopeful Bernie Sanders pointed out recently, political elites can always find billions upon billions to protect banks and wage wars, just not for protecting ordinary people. They could easily prioritise citizens over economic elites, but they choose not to. For example, they could introduce a regular universal basic income (UBI) to cover people’s essential living costs for a fraction of what it’s costing to bail out companies.

Capitalist fundamentalists may be fine with massive bailouts for companies and the stock market (i.e. ‘socialism for the rich‘). But they fear what bailing out ordinary people would represent (i.e. socialism for everyone else). And for them, as Patrick made clear, dying is a price worth paying to prevent this. That sums up perfectly the moral bankruptcy right at the heart of modern-day capitalism.