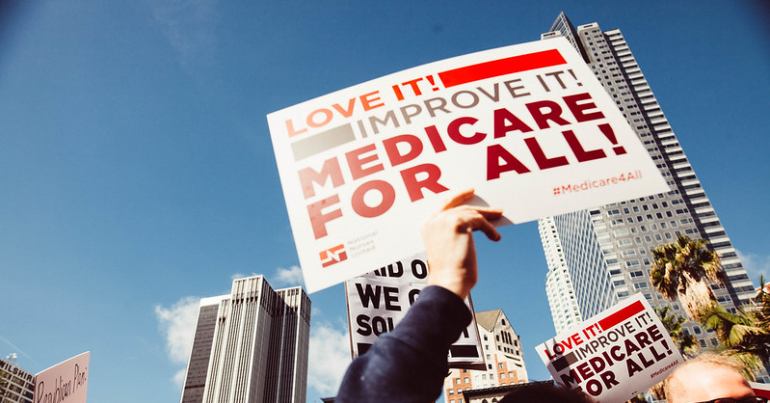 The outbreak of coronavirus (Covid-19) has reinvigorated the debate about universal healthcare in the US. Suddenly, even right-wing figures are in favor of offering medical services free-at-the-point-of-service. But as progressives have pointed out, if the government can afford to do so during a crisis for a specific health issue, then why not permanently for all health issues?

The response from economic elites to this rather obvious point has been both deeply depressing and highly revealing.

Recently, Bernie Sanders’ national press secretary Briahna Joy Gray posted on Twitter a simple yet insightful response to a previous tweet from senator Kamala Harris, a former candidate for the Democratic nomination for president. It pointed out that Harris’s proposal for free testing and treatment for coronavirus shouldn’t be limited to just that one condition:

This is a good start, but is it ok to die from cancer or diabetes becuase you’re poor? https://t.co/3emqCgcfC9

… except to establishment Democrats apparently

This straightforward reality was greeted with some surprisingly (yet somehow unsurprising) hostile responses from Democratic Party establishment figures and their supporters in the corporate-owned media. Supporters of establishment favorite Joe Biden were at the forefront of the attack:

Ok, what we AREN’T going to do, is bash Kamala Harris.

Others took the emotional blackmail approach by pointing out the irrelevant fact that Harris’s mother died of cancer. “Legal analyst” at CNN, Midwin Charles, for example, tweeted:

Her mother died of cancer. Your tweet is in poor taste to say the least.

There were also those who claimed that Gray was motivated by bitterness due to the Sanders campaign’s setbacks in the most recent primary contests:

Since your candidate has no pathway to the nomination you could, instead, highlight actual critical policies, instead you gaslight and agitate without a cogent plan of direct action. You’re mean spirited in a time when people need solace and solutions. Really pitiful, Briahna.

Progressives come to the defense

Fortunately, though, there were some brave progressive voices who jumped in to defend Gray from these attacks. Many pointed out that she was simply highlighting the absurdity of the position held by Biden and other establishment Democrats who support universal coronavirus-related care yet oppose it on a broader level.

Today we learned that saying poor people should be able to get free medical care is considered a fireable offense by many Washington folk who work in Democratic Party politics.

Bernie’s press secretary suggesting to a sitting US senator that cancer treatment, and not just COVID-19 treatment, should be free has generated far more outrage from liberals on Twitter than the fact that Biden’s senior adviser offered free PR & legal advice to Harvey Weinstein.

Gray’s defenders also pointed to how warped the responses were to her comments:

Pretty insane that @briebriejoy is trending rather than the fact that tomorrow, millions of people who’ve been laid off are going to lose their employer-based healthcare bc of the absurd system @JoeBiden @PeteButtigieg @KamalaHarris @amyklobuchar fight to keep

Briahna Gray is trending on Twitter because affluent blue-check lanyards in Northwest Washington were mad that she asked a powerful politician if low-income cancer patients should get free medical care.

Perhaps most importantly, Sahil Kapur pointed out that Biden’s position on universal healthcare is largely a continuation of the status quo:

No time for kid gloves

Given the huge amount of human life that’s at stake, it’s not the time to be treating establishment figures with deference. They need to be called out on their stubborn clinging to an inhuman and indefensible status quo that denies care to millions and causes the deaths of thousands and leaves thousands more bankrupt.

As The Canary previously argued, the coronavirus outbreak has provided clear evidence that radical change has been possible all along but resisted by powerful interests who stand to lose out. The explanation for Biden and his backers’ opposition to a change to universal healthcare is simple: establishment Democrats have spent their careers pandering to a private health insurance industry that’s profiteering would be brought to an end by an implementation of a Medicare-for-all system.