Over 100 fake twitter accounts of ‘nurses’, offering support to the Cabinet’s coronavirus (Covid-19) strategy, have apparently appeared, then suddenly disappeared. There has been speculation on Twitter as to their origin.

This distraction comes at a time when details of government cock-ups regarding the outbreak appear almost daily.

A claim has emerged that someone, either an employee with the Department of Health and Social Care (DHSC), or via a contracted “marketing agency”, created 128 fake NHS twitter accounts. It’s alleged that postings on those accounts came from one person and “4 assigned contributors”, using the Hootsuite tool:

It’s further claimed that the source is a person currently working for the department:

The one person has been identified.

Despite the @DHSCgovuk reply to my queries of 'no comment' (and that's all she wrote), that person is a contracted Government employee temporarily assigned to this department.

The accounts were apparently promoting the government line at any one moment in time, so herd immunity one day, end of lockdown (and back to herd immunity) another day:

The accounts originally pushed for the 'herd immunity'. In later days they changed tack and were were pushing for the country to 'open up again'.

Not to much of a stretch that the operation was to test the waters for a change in policy. Just a theory.

But when the matter was raised with the DHSC, the accounts suddenly disappeared:

The accounts have now mostly gone, not suspended by Twitter but deleted by the account holder(s) in one simultaneous mass cull a few days ago … At the click of a button.

Which itself, goes to prove the singular control of all the accounts.

This one, for example:

And it turns out that the nurse named ‘Susan’ is apparently called Mia: 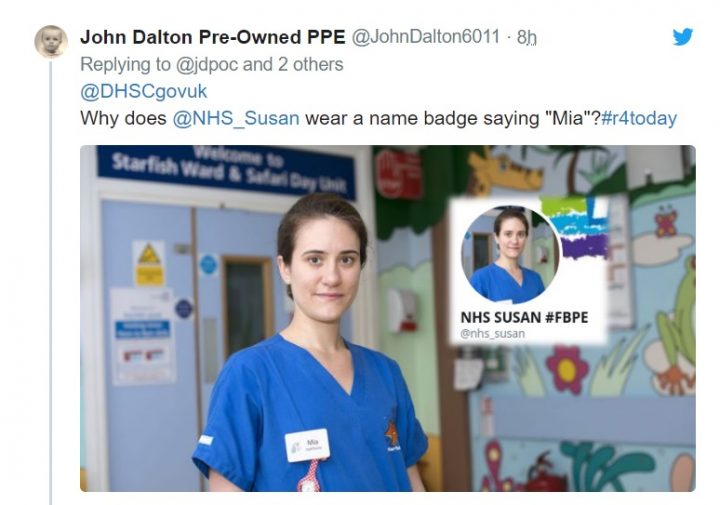 The DHSC has denied all responsibility:

These claims are categorically false.

To share disinformation of this kind undermines the national effort against coronavirus.

Before anyone shares unsubstantiated claims online, use the SHARE checklist to help stop the spread of harmful content:
➡️https://t.co/rdfG1BuY7Q pic.twitter.com/Ydlx2qyKkB

Some people wondered if the whole thing was an elaborate joke:

Do you think anyone trying to create ghost accounts that could pass as real would write this in their bio#BanTheClap should've been your first clue, #FBPE the second 😂😂😂

Please, stop with the conspiracies pic.twitter.com/ofhHRoesvX

Journalist Nafeez Ahmed states that if it turns out that a department of the government is responsible for these fake accounts, then we need to know more:

The UK Govt appears to be running a covert propaganda campaign to justify its failed #COVID19 strategy. How much are they paying out for for this #fakenews? Which private firm are they paying? And why isn't the wider press bothering to call it out? https://t.co/cWXgnQc261

Journalist Mark Curtis responded to the DHSC rebuttal by pointing to an article by Phil Miller that claims how fake news is very much standard for this government:

Great to see the government now doing rebuttals. Can they also do one to this? – analysis by @declassifiedUK on how the govt misled the public for weeks.https://t.co/6vBUhAsWHZ

The article lists many examples of government disinformation since the outbreak began.

There’s another sort of fake news – namely exaggeration. For example, at a recent government daily press briefing on the outbreak, England’s deputy chief medical officer Dr Jenny Harries stated that the UK has been an “international exemplar in preparedness”.

Following that briefing, Lancet editor Richard Horton tweeted that the government’s advisers should no longer be trusted:

When you see supposedly independent medical advisors to government tell what are manifest untruths to shore up a political regime whose credibility is rapidly collapsing, you have to say that those advisors have lost their integrity and our trust.

I cannot believe what I am hearing at the press conference. Deputy CMO Jenny Harries still believes that testing policy in the UK has been correct. And she doesn't understand links between tests and #COVID death rates. Is this #CMO policy? If so, they should resign.

Meanwhile, Channel 4 News journalist Alex Thomson suggests the government has failed to keep deaths from the outbreak to a number it aimed for:

At daily briefings govt and medical advisors always said fewer than 20,000 deaths would be “success”. Since more than 20,000 have now died in UK (they only count hospital deaths), is that “failure”?

Indeed, there’s suspicion that the government is hiding the actual number of deaths:

Some of the data is hiding in plain sight.

– the govt that week announced 2,814 hospital deaths from CV.

The govt figures are 20% short that week. pic.twitter.com/5xAtpCKb0n

The Canary previously reported that, according to the National Care Forum, it is:

estimated that more than 4,000 people may have died after contracting Covid-19 across all residential and nursing homes before April 13.

Costello predicts that, due to government dithering, the UK is likely to have the highest number of coronavirus-related deaths in Europe:

The “harsh reality” is that the UK was too slow on “a number of things” and will “probably have the highest death rates in Europe” – UCL’s Professor Anthony Costello #coronavirus pic.twitter.com/aaLddV5WBo

The dissemination of fake news would not be surprising from a government led by Vote Leave propagandists, for its modus operandi is all about disinformation or non-disclosure. Add to that the mishandling of resources and lurching from one strategy to another, and we end up with a disaster compounded by an even bigger disaster.

Moreover, years of Tory austerity has meant the NHS has invariably struggled to deal with the crisis. Ultimately, that means lives lost that need not have been lost. The latest figure – not counting deaths in the community or care homes – is reported to be more than 17,300.

So perhaps this failing and shambolic government should now rethink its exit strategy (assuming it has one). Namely, by doing the honourable thing and exiting from government altogether.