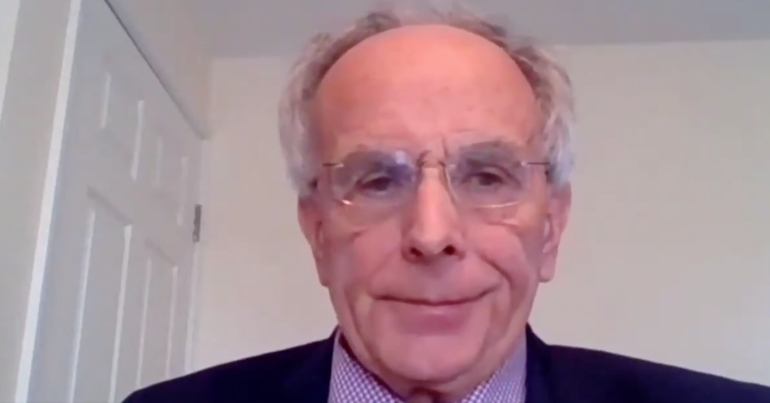 Prime Minister’s Questions (PMQs) returned on 22 April. And while in a different format – with limited MPs allowed in the chamber and others appearing virtually, it was almost business as usual.

Except in these weird times, when we’ve found ourselves agreeing with Piers Morgan, it was another unlikely contender who asked a question worthy of former shadow chancellor John McDonnell.

Pro-Brexit Tory Peter Bone, who “definitely” believed UKIP “has been a good thing for British politics”, slammed the banks’ response to the coronavirus (Covid-19) pandemic.

“What on earth is going on?”

Bone highlighted that many people are having to rely on their overdrafts due to the pandemic:

Yet the banks are charging 20% interest per year, which they’re going to increase to 40% in July. At the same time, they’re offering savers a pathetic interest rate of 0.1%.

And as many of us who paid the cost of the bank bailout through austerity know only too well, Bone stated:

Yet these are the same banks that were saved by billions and billions of pounds of taxpayers’ money.

What on earth is going on?

Although cut off mid-way, Bone managed to finish with a question that many people would like the answer to:

When are the banks going to act in the national interest?

Peter Bone MP asks:
Why are the Banks being allowed to charge extortionate interest rates on overdrafts (20% & soon to be 40%) when they were bailed out with $bn's of OUR money in the last crisis?@DominicRaab refuses to answer the question.#PMQspic.twitter.com/MxSjy1FwTM

You know it’s an apocalypse when…

Many Twitter users found themselves in the strange position of agreeing with Bone:

A good question from Peter Bone..
Confirmation that everything is upside down!#PMQs https://t.co/thsQERZUnc

Bank overdrafts now 20% interest now due to go to go to 40% and 0.1% interest for savers. Yet the banks bailed out by Govt. When are banks going to support their customers. Amazingly sensible Q. from Peter Bone. #PMQs

And others suggested that he did a better job than new Labour leader Keir Starmer at holding the government to account:

I think Excellent is underserved praise. Peter Bone a Conservative out did Kier for exposing Dominic ineffectiveness.

Others, however, couldn’t help but celebrate Bone getting cut off, given his previous parliamentary contributions:

A remote Peter Bone has the volume cut off half way through his prolix question.

While this was an eminently good question from Bone, the answer is not rocket science. Because the fact is that banks don’t and never have worked in the national interest. And it was only down to pressure that they caved at the beginning of the month and halted payments of billions of pounds to shareholders.

Accountability is needed. And the banks need to explain why they’re profiting from an international crisis. But the truth is that this is something the banks do very well. After all, banks profit from the climate crisis and the arms trade on a daily basis.

The only way this can change is through a revolution in our financial institutions; sweeping changes to ensure they work for people not profit. Unfortunately, this is not something either the Conservative Party (nor the Labour Party under Starmer) is likely to do.