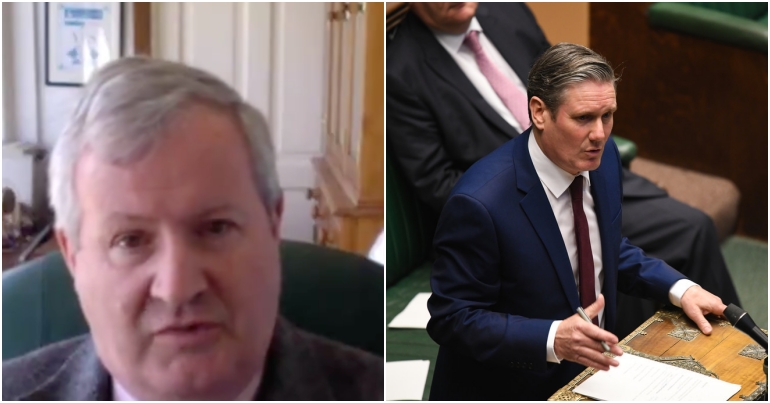 Prime Minister’s Questions (PMQs) returned on 22 April in a slightly revised format. Fewer MPs were allowed in the chamber and many contributed virtually from their homes.

It was also Keir Starmer’s first PMQs as Labour leader. It was, therefore, disappointing that it was left to SNP leader in parliament Ian Blackford to ask the question Starmer should have asked.

“People are being left behind”

Blackford raised the issue of the huge number of people who have been “left behind” by the government’s coronavirus financial measures. While the government has introduced a wide range of support, he pointed out that:

34 days on, thousands of businesses and individuals have found themselves with no income, with no support, and no end in sight.

And he identified the reason behind this:

all because of arbitrary cut-off dates and bureaucratic barriers imposed by this UK government.

But the SNP has an answer and is leading a cross-party call to implement a Universal Basic Income (UBI). Blackford stated that UBI will:

put cash in people’s pockets and it will help ensure a strong economic recovery and a fairer society.

He then asked Dominic Raab (standing in for Boris Johnson) whether he agreed with the proposal:

In March the chancellor unveiled coronavirus help packages "and yet 34 days on, thousands of businesses and individuals have found themselves with no income"

It’s not surprising that Starmer didn’t raise this issue, though.

As the Financial Times reported, over 100 MPs have signed a letter calling on the government to introduce UBI. Signatories include leader of the Lib Dems Ed Davey and former shadow chancellor John McDonnell. But one prominent name is missing from the list: Keir Starmer. Starmer reportedly believes that it’s “unlikely to be possible”:

his spokesman just told reporters: "We think constructing an entirely new social security system at the moment is unlikely to be possible. But as we remove to recovery…we’ll be making arguments for a new settlement that is more effective."

This is a strange statement given the seismic changes already introduced due to coronavirus. And it’s also not something other countries have struggled with. Spain’s centre-left coalition government, for example, is currently defending a plan to roll out a form of UBI “as soon as possible” in response to the pandemic.

The Conservative government has failed to introduce the one policy that could immediately help everyone in the country. Instead, it has introduced measures to satisfy just enough workers to avoid civil unrest. For now.

But this isn’t good enough. No one should be left behind. And UBI is a clear way to ensure this. It’s just a shame that Labour now has a leader that isn’t prepared to push for it.