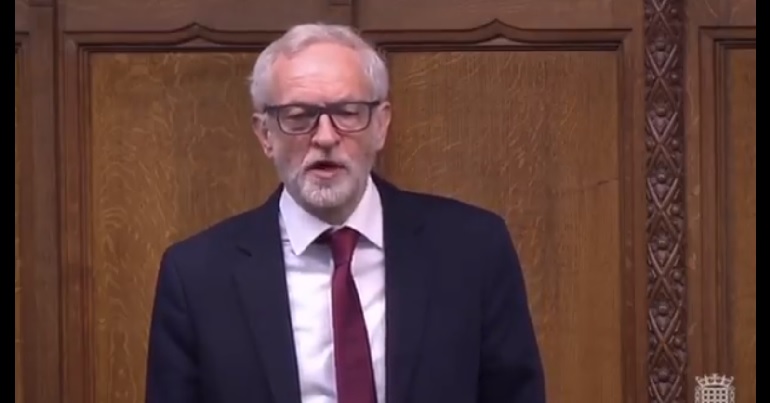 Prime Minister’s Questions (PMQs) was held in a sparsely attended House of Commons on 22 April, with many MPs opting to join in via video conference. One person who was in parliament, though, was former Labour leader Jeremy Corbyn. And while he’s now on the backbenches again after almost five years on the front line, he’s still very much leading.

Corbyn has been consistently holding the government to account over its highly controversial coronavirus (Covid-19) pandemic response both as opposition leader and backbencher in recent weeks. And he asked health secretary Matt Hancock in parliament on 22 April:

Can he assure us that there’s going to be a really rapid increase in the level of testing and the availability of testing to get on top of this dreadful virus?

He had previously stressed that:

During the debate on Matt Hancock’s Coronavirus statement, I paid tribute to all those workers doing such an incredible job during this crisis.
I also asked him why current testing levels are still nowhere near the level that is necessary, as confirmed by numerous recent reports. pic.twitter.com/fx143Z6r9Q

Here's a few of my snaps from the first PMQs/Ministerial statement since the House approved a motion to allow participation in questions remotely. #Raab #kierstarmer #pmqs #COVID19 #HouseofCommons pic.twitter.com/yyy5CgOVuL

The World Health Organisation told us to “test, test, test” more than a month ago.

The lack of testing and tracing for key workers, including in the NHS and social care, has been risking their health and that of those they care for.https://t.co/hNigYn5kYH

experts who offered help to the government [with testing] … waited weeks for a response. And testing rates are still shockingly low. The government has promised 100,000 tests a day by the end of April, but there were only around 20,000 done between 19 April and 20 April, although capacity is greater.

Corbyn and his ideas are going nowhere

The presence of Corbyn in parliament showed his ongoing commitment to serving his constituency and country. His question was firm, damning, and completely valid. In short, he’s going nowhere. And nor are his important, pertinent ideas:

A National Care Service as set out by @jeremycorbyn and @johnmcdonnellMP & included in Labour’s GE19 manifesto is desperately needed. The care sector has been decimated.

Today at #PMQs the Government was not able to say how many care workers have died during the current crisis. pic.twitter.com/b2BPiUhfc4

The Government must cancel these student nurses' debt.

Trainees volunteering on Covid-19 wards should not be saddled with annual £9,250 fees.https://t.co/OxXNTGJgNw

Migrants are dying of Covid-19 because they're too afraid to seek help.

I'm one of 60 MPs saying NHS charges for migrants must be suspended.

Medical groups including @TheBMA have warned such charges risk undermining efforts to stop the spread of Covid-19https://t.co/D05wR9Pn5B

Urgent answers are due from the Government on these issues, and action – not excuses – needed on #PPE, testing and ventilators.

It is clear that pandemic planning was a casualty of austerity. We need investment in our future moving forward, not more cuts.https://t.co/YCPKJgBtmx

As one person pointed out this week, Corbyn “doesn’t have to be the Labour Leader to be leading from the front”:

This man! ❤
He doesn't have to be the Labour Leader to be leading from the front in the collective effort to support vulnerable people. Jeremy Corbyn always working for the people, preparing food at Brickworks Community foodbank to deliver to people homes.#CoronaCrisisuk pic.twitter.com/dD36SpfeV3

So if Corbyn’s opponents thought he’d just disappear once he was no longer Labour leader, they misunderstood who he is. As one company suggested today, it’d be difficult to find another high-profile figure as humble and kind as Corbyn:

What a pleasure to install a boiler for @jeremycorbyn We have been lucky enough to work for a number of famous people and celebrities (including royalty👑) but never for someone so humble! What a lovely client, fed us lots of food and coffees! #EssentialWorkers #emergencyrepair pic.twitter.com/NoalSppm0M

Corbyn leads by example. He always has. And other politicians would do well to learn from him.

Featured image via screenshot, with additional content via Press Association