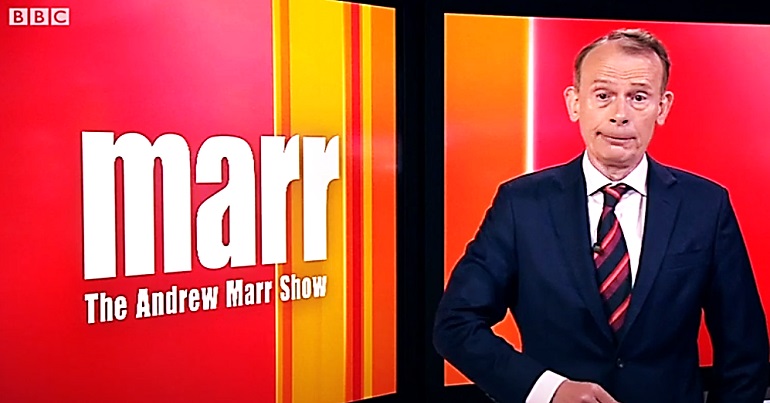 It was quite the Sunday morning for the Andrew Marr Show. Because it managed to let a Tory minister off the hook, treat the Scottish First Minister completely differently, and leave it to a  scientist to warn about the government’s coronavirus (Covid-19) science mantra. Just the usual for the BBC, really.

First out of the blocks was Nicola Sturgeon. Some people on social media thought her appearance showed that of a “true leader”; the “best” in the UK apparently:

Nicola Sturgeon on the #Marr show has come across as a true leader.
In control ,compassionate and honest.
Exactly what Scotland needs in this difficult time

To be fair to Sturgeon, she remained cool, calm, and collected under Marr’s scrutiny. She gave answers where she could, and didn’t where she couldn’t. Marr couldn’t help but throw in some barbed comments. At one point he digged “I know that you like questions about borders” – a snide poke at Scottish independence. But it was the host’s questioning of Sturgeon about coronavirus testing which perhaps showed Marr’s obvious bias the most.

He said to Sturgeon:

Let me talk to you about testing. Because originally you said you were going to have 10,000 tests a day by the end of April. Then you downgraded that to 3,500 tests, and you’re still below 2,000 tests. Testing is not going well in Scotland, is it?

But she disputed this, saying:

I don’t think you’re factually correct in the first part of that. 3,500 capacity for tests by the end of April is what we said. Then when the UK government set its 100,000 we said… anything they were doing proportionally applied to Scotland as well. We are absolutely on track not just to meet that capacity but probably exceed it by the end of April.

So, it seems that the Scottish government is merely following what its Westminster overlords are doing. But when UK foreign secretary Dominic Rabb came on Marr later, the line of questioning from the host was slightly different.

Enter the Tories – on both sides of the desk

To be fair to Marr, he did push Raab on the ongoing scandal over lack of personal protective equipment (PPE) in the NHS. But the host’s probing over testing, when compared to how he was with Sturgeon, was appalling. He should have said, as he did with the Scottish First Minister, ‘testing is not going well in England, is it?’ But he didn’t. Marr said:

Let me read you Matt Hancock from the 3 April: ‘we increased the goal at the end of April to 100,000 tests. And then we will go on to meet the target which the prime minister has previously set out of 250,000 tests per day’. Is that 250,000 tests per day target still the government’s aim?

No mention of the chaos surrounding testing for essential workers. No mention of the scandal involving the accuracy of the tests being used. The only aspect of testing Marr did probe Raab on was the lack of it early on for hospitalised people returning to care homes, of which he said could be the “darkest” part of the UK’s coronavirus “story”. Raab refuted this. And Marr’s response what hardly that of a public service broadcaster holding the government to account:

#marr – We only started testing people going back into care homes about 10 days ago, & what is going on in care homes might be the darkest part of the story.

Dominic Raab – I'm not sure I would say it's the darkest… 🤔#Ridge pic.twitter.com/NSdtl3gZNs

Marr even managed to sneak in his opinion that the Tories had “got lots of things right as a government”. Which is not an opinion shared by everyone in the UK.

But the person who perhaps nailed the state of the Tory government’s response to coronavirus wasn’t actually Marr. It was Professor Brian Cox.

An actual scientist sums it up

The Tory government’s repeated go-to phrase during the pandemic has been they’re ‘following the science’. Even though actual scientists have called that out as the Tories removing political responsibility for the crisis from themselves.

Cox summed it up. Because during his interview, he bluntly said:

His statement says it all. The Tories have done little throughout this pandemic aside from deflect any responsibility for it off themselves. And journalists like Marr, with their clear bias and pathetic questioning of the government, have played their part in this. Sunday’s show was no different.