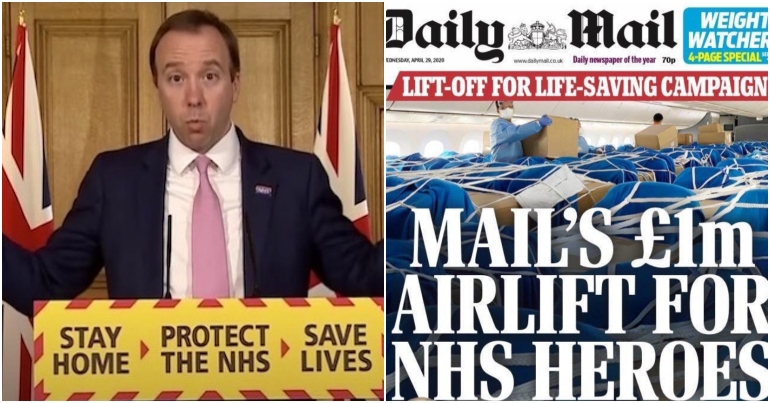 The Daily Mail has launched a new campaign. It claims that:

In a dramatic PPE [personal protective equipment] crisis intervention, we buy 150,000 coveralls & masks from China  – then fly them in last night for frontline hospital staff.

While any initiative that can save frontline workers’ lives is great, this initiative also falls into the category of things we shouldn’t have to fundraise for if we had a properly-funded NHS and a government that hadn’t essentially ignored a report into pandemic awareness and preparedness.

Health secretary Matt Hancock openly welcomed the campaign. But there’s a big problem with Hancock’s praise for the Mail, because it blows all his other PPE excuses out of the window.

A brilliant initiative from @DailyMailUK in our national effort to tackle #coronavirus pic.twitter.com/umz70nKdmS

Since the beginning of the coronavirus (Covid-19) crisis, the lack of PPE has been a major and devastating issue for those working on the frontline.

On 28 April, Hancock was asked to make a public apology to the son of a doctor who died from coronavirus two weeks after issuing a warning about the lack of PPE. Hancock replied that:

We took very, very seriously what your father said and we’ve been working around the clock to ensure that there’s enough protective equipment.

He also said that thousands of people were “doing everything they can” to solve issues with PPE despite complicated logistical problems.

Meanwhile, a Panorama investigation asked Has the Government Failed the NHS?. As The Canary reported, the programme revealed a shambolic catalogue of failings. For example, government promises on delivering “a billion items” of PPE are misleading, because:

the government is counting items you might not think of as PPE such as: cleaning equipment, waste bags, detergent, and paper towels. More than half the items are surgical gloves. And in most cases, each individual glove is counted rather than pairs.

So what’s the problem, Matt?

It’s therefore a little strange that Hancock would praise the Mail campaign as a “brilliant initiative”. After all, according to the health secretary, logistics and supply are the main reasons why frontline workers don’t have the PPE they need.

As the BBC reported on 17 April:

Mr Hancock said on Friday that PPE was a “precious resource” and that maintaining supplies was challenging due to the “very high” global demand.

But apparently, obtaining said PPE is not so difficult if you’re the Daily Mail. Somehow, the paper managed to do something that Hancock is finding a logistical nightmare.

Comedian Frankie Boyle, meanwhile, highlighted the fact that we might now have found the solution to this crisis:

Now all we need is for the Daily Star to source some ventilators, and the Metro to start working on a vaccine

Coronavirus has highlighted the massive failings in our NHS caused by a decade of Conservative-led government cuts. The NHS was already in crisis before the pandemic. Now, what the government has done has been laid bare for all to see; and it’s a national disgrace.

This situation has also led to us to the point where a tabloid paper is supplying PPE to the NHS. Anyone else who can stomach praising the Mail can call this a “brilliant initiative”. But not Hancock. Because the Mail essentially nailed just how incompetent the health secretary is by doing his job for him.