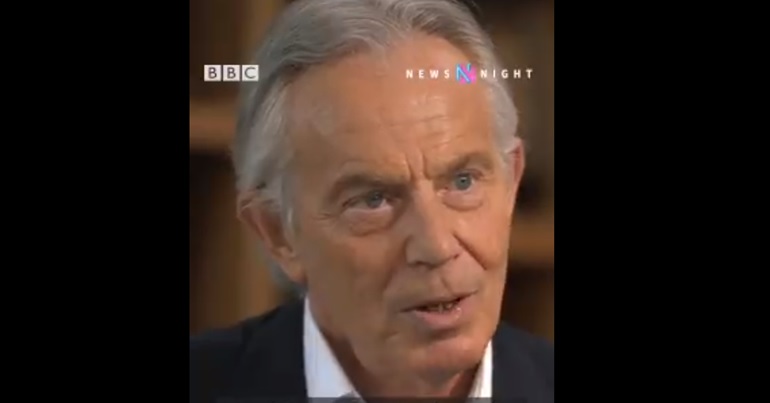 Tony Blair has said the Conservative government is “right” to push for schools to reopen on 1 June. But he’s not exactly an authority on ‘following reliable evidence’, especially when people’s lives are concerned:

Tony Blair then: “There is evidence of weapons of mass destruction”

Tony Blair now: “There is evidence that it’s safe to send children back to school”

Ah yes, the same Tony Blair who famously bases all of his decisions on the sturdiest of evidence that definitely won't be completely and utterly discredited during a massive inquiry that happens several years later. https://t.co/137o06kRKZ

Blair, of course, argued that there was ‘evidence‘ to justify invading Iraq in 2003. And he went ahead despite massive opposition from the public – just as there is widespread opposition to reopening schools too early now, in the middle of the coronavirus (Covid-19) pandemic.

As former Labour leader Jeremy Corbyn said in 2016 after the damning Chilcot inquiry into the Iraq invasion, it was “an act of military aggression launched on a false pretext”. Numerous colleagues, he stressed, had been:

misled by a small number of leading figures [i.e. Tony Blair] who were committed to joining the United States invasion of Iraq come what may, and were none too scrupulous about how they made the case for war.

As The Canary reported previously, Corbyn insisted that those responsible “must face up to the consequences of their actions” (i.e. mass devastation in Iraq and the surrounding region, and an ensuing wave of terror around the world that we still see today). Indeed, many British voters still believe Blair “should be tried as a war criminal”.

The National Education Union (NEU) says schools must only reopen “when it’s safe”. Its five tests are:

The British Medical Association has backed the NEU. Several councils across England, meanwhile, have advised schools not to open.

So why the anti-union attacks?

People who didn’t seem to care in the last decade as Conservative-led governments took a sledgehammer to children’s wellbeing are now suddenly champions of children going back to school. The corporate media, for example, has decided to attack teachers for demanding safety. And Labour right-wingers have essentially joined in. Blair fanboys like Andrew Adonis and Alan Johnson have been particularly vocal in opposing unions and backing Tory plans.

As journalist Aaron Bastani points out, the government’s attempt to send children back to school is basically so their parents can return to work too. And it’s not the parents of kids at private schools who drive the economy; it’s the parents who send their kids to state schools.

The UK has already suffered around 60,000 excess deaths during this pandemic. Some Labour politicians, meanwhile, are backing the unions to prevent the death toll spiralling even further. But they’re not the ones in charge. Because the Labour right is on the march again. And that means the vile rehabilitation of people like Blair – the man who pioneered ‘Tory-lite‘ politics and did immense damage to the labour movement. So it’s now more important than ever that we show the unions our support.