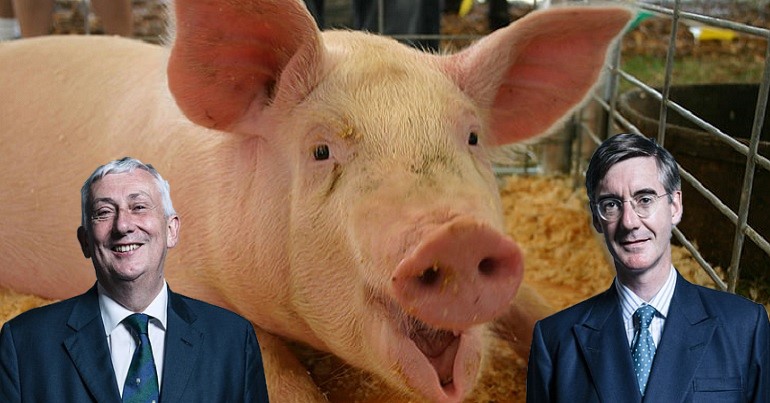 It appears MPs are acting out their own version of George Orwell’s Animal Farm. Because, as the saying goes, while ‘all animals are equal’, MPs are ‘more equal than others’. As they look set to get certain privileges that the rest of us don’t.

As BBC News reported, the speaker of the House of Commons Lindsay Hoyle was talking about coronavirus (Covid-19) testing for MPs. Testing was, as BBC News put it, so “more of them could safely enter the Commons chamber”. Obviously home working, Zoom, and remote voting (being done across Europe) have bypassed the “Mother of Parliaments“. Hoyle said:

To be quite honest with you, I’d like to do it daily, not weekly. The problem is weekly testing doesn’t tell you anything.

The the commons authorities are reportedly “looking at it”. Meanwhile, MP for Victorian Throwbacks and Commons leader Jacob Rees-Mogg doesn’t think MPs should have to wear face masks; something Hoyle agrees with. One rule for them, hey?

But the story caused quite a storm on social media.

The Government still haven’t managed to get regular testing for nhs and social care staff which has to be a priority over this https://t.co/ghjjJzNzxN

Iwan made a similar point about teachers:

If mp's need daily testing to return to normal work patterns, why on earth don't schools, where teachers are being asked to expose themselves to dozens of children who could be potential asymptomatic carriers every day? https://t.co/iHGdLLKLNw

And Jamie Fryer thought the story summed up the state of UK society more broadly:

To test well MPs daily just so they don't need update working practices whilst the unwell public cannot access a test within 100 miles is pretty symbolic of our current establishment isn't it.
https://t.co/C3L8U61h7d

But it was Jade who put it in a nutshell with the use of a famous Orwell quote:

The speaker is happy for parliament to be crowded again, but has ruled out MPs wearing masks.https://t.co/lK8QjXlZIy

MPs: the pigs with their snouts in the Westminster trough

It seems obscene that MPs could get daily testing, when they could do much of their work from home. More obscene because in recent days there have been a flurry of news reports about testing for the ‘plebs’ running out. This includes key workers such as NHS staff. That’s the same NHS staff who have had to fight the government over a pay rise – while MPs have got one themselves this year.

All animals are equal, hey? Except, of course, the pigs with their snouts in the Westminster trough.