When IKEA sacked a trade unionist for doing his job, it also attacked workers’ rights - Canary 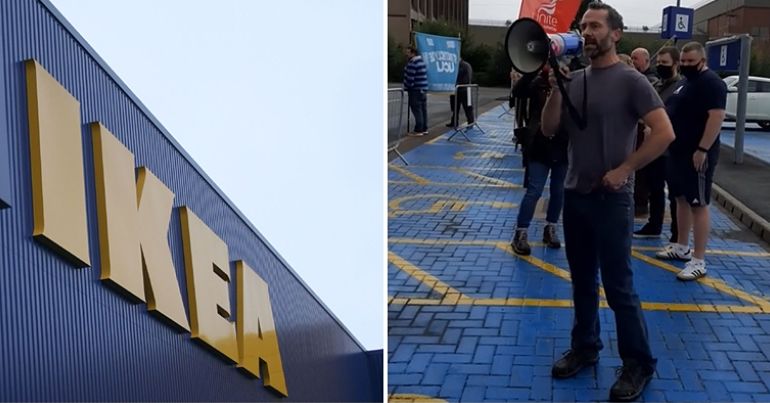 Multi-billion Euro retailer IKEA has sacked shop steward Richie Venton from its store in Braehead, Glasgow after he informed staff the retailer was changing its sick pay scheme. The changes could affect IKEA workers across the UK as well as in Ireland. Venton is a member of the Union of Shop, Distributive and Allied Workers (USDAW).

IKEA’s changes come as Scotland’s first minister Nicola Sturgeon announced that she doesn’t want workers to feel “intimidated” back to work. So the campaign to reinstate Richie Venton and workers’ sick pay got underway. And it has the support of the trade union movement as well as cross party support in Westminster.

What happened and why?

IKEA says it sacked Venton for a “breach of confidentiality” when he told staff of the upcoming changes to sick pay policy. These changes came into effect on 1 September. They could mean workers who are off sick for more than 10 days in a year, or after a third illness in a year, won’t get company sick pay.

So staff won’t be fully covered financially should they need to self-isolate for up to 14 days. Instead, such workers will go onto statutory sick pay (SSP) where they’d only receive £95.85 per week.

The campaign to “Reinstate Richie Venton and Reinstate Sick Workers’ Wages” has got to work. Campaigners started a reinstatement petition on their website, where it has so far received more than “5,000 signatures”. The campaign has also received widespread support across the trade union movement.

Stephens then told The Canary:

I have lodged a Parliamentary motion in support [of] Richie, in support and solidarity… [into what] is a scandalous decision by IKEA. The only crime that appears to have been committed is Richie’s effectiveness as a Trade Union representative and advising members what IKEA had planned in proposed changes to its sickness absence policies.

Due to media pressure, we have already seen IKEA making changes to their initial dangerous proposals.

There is of course a wider trend that MPs will have to be cognisant of, and that is the trend of companies who have plans locked in a drawer to cut terms, conditions and wages, to use Covid as a cover to implement these changes.

As a matter of principle we need to call out these manoeuvres when they arise and bring employers to book for being interested solely in profit margins and not the wellbeing of staff or the wider economy.

So far Stephens’ motion has received the support of 25 MPs from the SNP, Labour, and the Alliance Party. Campaigners are currently picketing Venton’s former workplace and say they’ll call for a boycott of IKEA stores if the company doesn’t fully back down.

As trade unionists with experience and responsibility across a range of employment sectors we deplore the sacking of the elected USDAW shop steward and convener at IKEA Braehead, Richie Venton, for simply standing up for workers’ health and lives in the midst of the worst killer pandemic in a century.

This is the first case in Scotland of a union activist being sacked for taking action in defence of workers from the threat posed by Covid-19, and we are determined to overturn this gross injustice and ensure that this can never happen again. We thus demand Richie’s immediate reinstatement to his job and to the union position members elected him to.

The Canary contacted USDAW for comment. Its national officer said:

We cannot comment on an individual member’s case. We continue to work with IKEA on their absence policy and welcomed the clarification that IKEA will continue to pay our members who are affected by the Coronavirus their full pay for the duration of their sickness or isolation period and this will not be counted towards any absence trigger points.

The Canary also contacted IKEA, but it wasn’t available for comment. However, Carin Hammer Blakebrough, country people and culture manager for IKEA UK and Ireland, has previously told the Daily Record:

We’re aware of a group of campaigners outside of our Glasgow store. We understand that this is an emotive issue, but we are unable to comment on individual co-worker cases.

Since its original announcement, IKEA has backtracked by announcing workers on sick leave would receive their contracted hours’ pay while self-isolating. However, according to campaigners, this still might not go far enough. Because workers contracted to work 16 hours per week could work as many as 30 hours. In such cases, those workers might only receive 16 hours’ pay while self-isolating.

A campaign spokesperson told The Canary that IKEA’s climb down followed their “resistance and publicity” campaign.

Workers’ rights since the pandemic

Employees in the UK are entitled to SSP for up to 28 weeks if they’ve been sick for at least four full days in a row. Any pay employees receive in addition to that depends on their employment contract.

And as government advice is to self-isolate for 10 to 14 days, this could leave employees in a difficult financial position. The campaign to reinstate Richie Venton and workers’ rights continues.