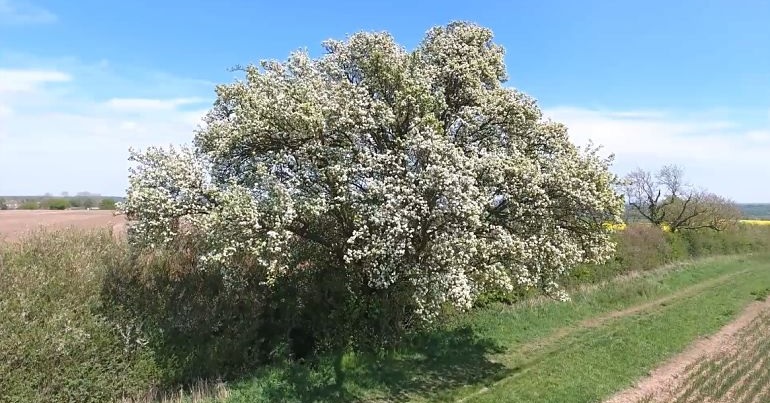 On 20 October, HS2 cut down a 250-year-old award-winning pear tree to make way for its high speed railway. While the iconic tree certainly isn’t the only victim of the project, the reaction to its destruction does sum up perfectly the state of the country right now. Because it exposes how divorced the country’s leadership is from its own citizens’ needs and desires.

The ancient tree, which had stood tall near the village of Cubbington for the last 250 years, won the Woodland Trust’s Tree of the Year poll in 2015. Over 20,000 people signed a petition against its destruction, and Stop HS2 protestors set up a camp in nearby woodland in opposition to the felling plan. But the public’s wishes went unheeded. On 20 October, HS2 ended the tree’s 250-year-long life in a matter of 90 minutes:

The pain in my heart, my anger and tears
Will never repair the destruction I fear
I #StandForTheTrees so I repeat we must #StopHS2FellingOurFuture #CubbingtonPearTree #HS2Ecocide pic.twitter.com/rDvSraUuqI

In response to the 20,000 signature-strong petition, the Department for Transport said:

HS2 Ltd explored all possible options to avoid removing the tree, but due to its age and condition, removal cannot be avoided.

But, as Warwick and Leamington MP Matt Western highlighted, the HS2 did re-route its line to preserve a nearby golf course in Kenilworth. Western said:

HS2 Ltd has much to answer for, including why the 18th hole on a golf course could be saved but this [wondrous] pear tree could not.

That tree represented so much. It was a huge part of the community, it was a symbol, an icon, like having a famous statue or building in your neighbourhood. It’s the loss of the heritage, the landscape, biodiversity.

It breaks my heart to be honest. I’m lost for words, really.

The tree has meant so much to people around here and to see it reduced to twigs in a matter of minutes is just heart-breaking. …

When the grief passes, people around here are going to be very, very angry. This vandalism of nature will never be forgiven or forgotten.

Many people also took to social media to express their dismay:

“The tree which moves some to tears of joy is in the eyes of others only a green thing which stands in the way”.

Both the Woodland Trust and RSPB England also voiced their anger over the felling:

As we said in March this year this scheme has descended into an example of WORST, rather than best, practice. #CubbingtonPearTree https://t.co/mL8rImsibI

We are deeply shocked and upset to learn that @HS2ltd felled the #CubbingtonPearTree today. There is no replacing the centuries of history and beauty that this tree has given to the Cubbington area. Our sympathies go out to local people and all tree-lovers.

Clearly, people across the country wanted this iconic tree to remain standing. But it’s not just their desires that the Conservative government and HS2 have ignored. It’s their needs too. We are in the middle of climate and biodiversity crises. To tackle these existential emergencies, we urgently need to prioritise ecological health and security. In short, we have to stop destroying our natural spaces – especially as the UK is already “one of the most nature-depleted countries in Europe”.

Citizens increasingly understand that. But the country’s decision-makers are letting them down. That’s why, as professor Ben Garrod pointed out, this latest act of ‘vandalism of nature’ has angered many in the country:

Sometimes the life of single person can galvanise generations. Or the death of a single lion can illicit global compassion.

So maybe the felling of a single tree can enrage a country. The development of #HS2 is a blight on our ever-diminishing green land. #CubbingtonPearTree https://t.co/KTDVNo2VEf

If people direct that anger into action, and pressure their elected representatives to end this ecological carnage, the Cubbington pear tree’s destruction could be a catalyst for change. That would be a fitting legacy for the 250-year-old national treasure, and would ensure that its death wasn’t in vain.