Content warning: This article mentions atrocities committed against Jews in Nazi Germany that some readers my find distressing.

The Mail on Sunday‘s front page on Sunday 13 December was nothing short of hate-inciting. Not only did it completely misrepresent German chancellor Angela Merkel, but a quote from a government source was even worse. Because that appeared to intentionally incite hate against her country.

As of 11:30am on 13 December, Brexit negotiations remained stalled. Boris Johnson previously said the chances of a no-deal exit from the EU were “very, very likely”. The Guardian reported that there may be a last minute result. It noted that:

foreign secretary, Dominic Raab, pinned hopes for a breakthrough on a telephone call between the prime minister and European commission president.

The Guardian also said that:

So the UK’s final Brexit deal still hangs in the balance. Enter the Mail on Sunday to make matters worse.

Enter the Mail on Sunday 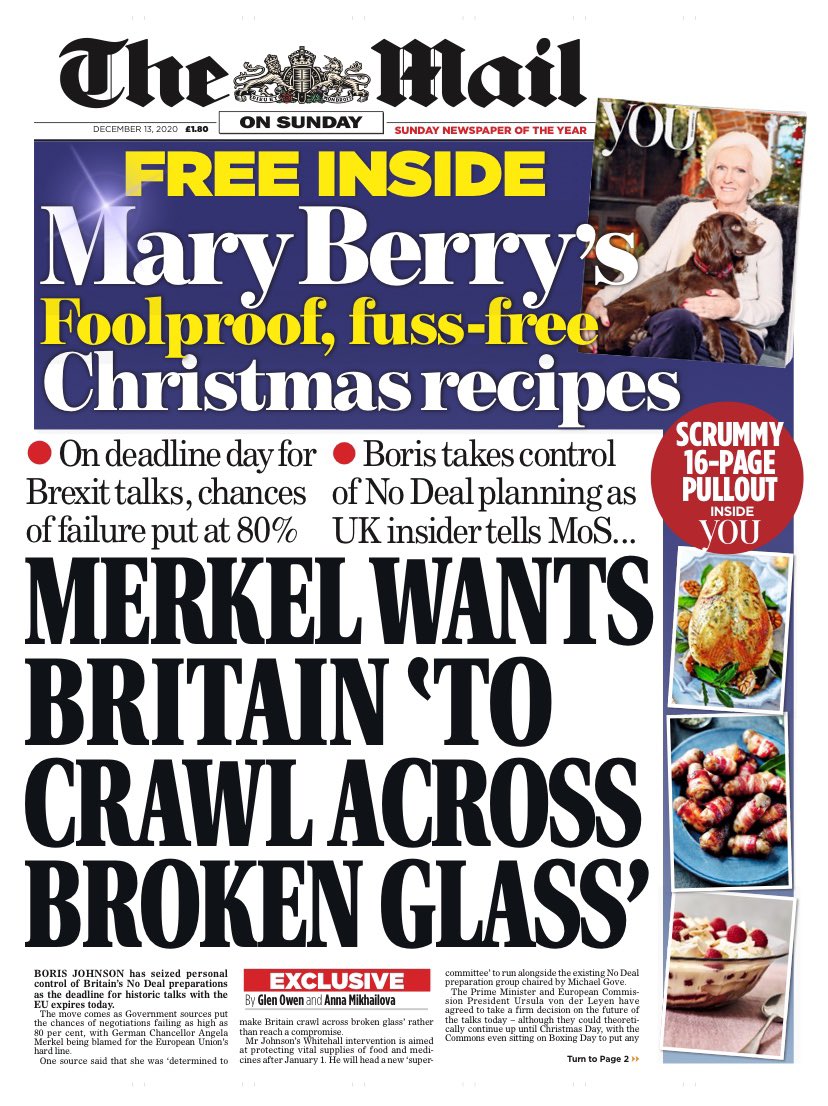 The article was little more than a puff piece for Johnson. It stated that he:

has seized personal control of Britain’s No Deal preparations as the deadline for historic talks with the EU expires today.

The move comes as Government sources put the chances of negotiations failing as high as 80 per cent, with… Merkel being blamed for the European Union’s hard line.

But crucially, its front page quote had nothing to do with the German chancellor. Because the Mail on Sunday was actually quoting a government “source”:

Read the headline, though, and you’d be forgiven for thinking Merkel had said these words herself. But given Germany’s history, that would be unlikely.

As Samuel West tweeted, the country has a “history with broken glass”:

As you know, Germany has a history with broken glass, so this seemed like an odd thing for a German politician to say. Read on, and you discover that this baseless quote is an anonymous one from a UK ‘source’.#MailOnSunday, your headline is xenophobic nonsense. Please stop it pic.twitter.com/nghoTPefkM

West is referring to the Kristallnacht. Michael Berenbaum wrote for Britannica that it translates to “Crystal Night”, and is also called “Night of Broken Glass”. It refers to the:

November Pogroms, the night of November 9–10, 1938, when German Nazis attacked Jewish persons and property. The name Kristallnacht refers ironically to the litter of broken glass left in the streets after these pogroms. The violence continued during the day of November 10

Britannica said that Nazis killed 91 Jewish people; attacked around 1,000 synagogues and “ransacked and looted” about 7,500 Jewish businesses. And police arrested around 30,000 Jewish men.

Either the UK government source knows very little about history, or they do and were being inflammatory with their broken glass comment. The Mail on Sunday then gave them a helping hand.

As GIBBON summed up:

The xenophobia and English exceptionalism summed up in one article and surprise sup rise it’s the #dailymail #mailonsunday leading the way what a sad sad day for our country https://t.co/DR5GizFR7g

Xenophobic trash is nothing new from the Mail on Sunday. But at such a critical point in Britain’s relationship with the EU, this new low is about as abhorrent as it gets. And the same applies to the disastrous UK government.