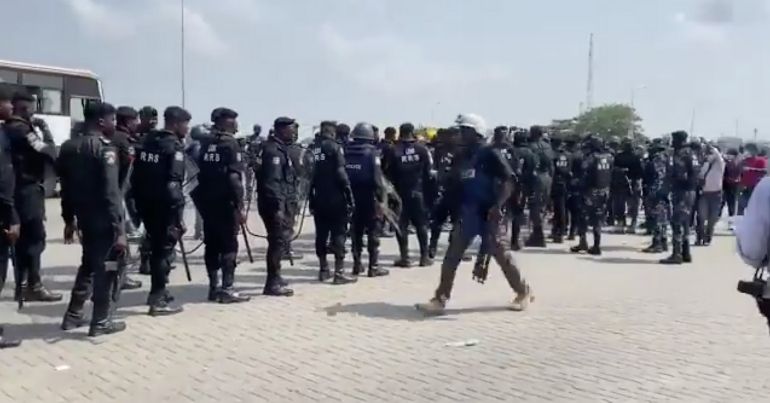 Armed security forces have suppressed a planned peaceful protest in Lagos, Nigeria. End SARS protesters planned to occupy Lekki toll gate, where state-sponsored armed security forces shot and killed 12 peaceful protesters in October 2020. Organisers intended to protest against the government’s plan to reopen the toll gate while covering up its involvement with the tragedy. Authorities have arrested a number of individuals for exercising their right to peaceful protest. And the police are allegedly denying them access to lawyers. They’ve also shut down the planned protest and opened the toll gate.

Young Nigerians have been protesting against police brutality, impunity, and bad governance since October. That was when they took to the streets and social media to campaign against the government’s notorious Special Anti-Robbery Squad (SARS). It came following years of mounting evidence of systematic brutality and corruption in the police unit. Although the government disbanded the squad, it’s carried out sustained attempts to quash the youth-led End SARS movement. Indeed, armed security forces shot and killed peaceful protesters; the Nigerian president blamed “hooliganism” for violence during protests, and the government banned cryptocurrency, a key source of income for the movement.

On 13 February, End SARS protesters took to social media to share their plans to occupy Lekki toll gate in Lagos. The toll gate was where Nigerian security forces shot and killed 12 peaceful protesters on 20 October 2020.

The protest was sparked by government plans to reopen the gate without taking accountability for the tragedy or seeking justice for those who were killed. On 8 February, one Twitter user posted:

#OccupyLekkiTollGate The Nigerian Government thinks they are smart. They want to reopen Lekki Tollgate but cant fish out those responsible for the killings of the protesters at Lekki Tollgate. If one of their loved ones was massacred, it wont take them secs to track the culprits. pic.twitter.com/BQccO97AaN

Movement leaders such as Omoyele Sowore urged protesters to ignore calls from Nigeria’s minister for culture asking protesters to abandon their plans:

I said it that you guys in the @mbuhari junta are scared of #peoplepower rest assured that #OccupyLekkiTollGate will go as planned except you shut down the tollgate and let justice prevail regarding victims of #LekkiMassaccre #EndSARS #RevolutionNow #EndBadGovernanceInNigeria pic.twitter.com/ku8wbkymDh

Why are Nigerians protesting?

As one Twitter user highlighted, Nigerians are protesting because the government continues to cover up the Lekki toll gate massacre:

They’ve not yet answered who ordered the shooting at Lekki toll gate but now they’re doing even more damage. This government was sent from the pit of hell!!! #EndSARS

Many see the government’s plan to reopen the toll gate while continuing to cover up its involvement in the national tragedy as callous:

A government constantly looking for how to make it’s citizens bleed, bad governance, police brutality, poverty, extortion, lack of Jobs, failed educational system, and the list is endless, what is our offense? #EndSARS #EndBadGovernanceInNigeria #Lekkitollgate

Nigerians are being denied their right to peaceful protest

Amnesty International Nigeria took to Twitter to remind the government that the right to protest is enshrined in the Nigerian constitution:

—Today Amnesty International received reports of the arrest of some protesters #EndSARS at the #Lekkitollgate #Lagos.

—We calling on all Nigerian authorities to demonstrate commitment to protect the right to peaceful protest. @MBuhari @ProfOsinbajo @jidesanwoolu @PoliceNG

Despite this, journalist Yemisi Adegoke reported a heavy police presence and acts of police brutality. Even though there were very few protesters in attendance:

A truck with speakers, a megaphone and #OccupyLekkiTollGate posters was taken by the police.

I also saw an officer handling a man that had been arrested quite roughly.

The officer repeatedly hit his legs with a wooden stick as he took him to a van. #OccupyLekkiTollGate

According to BBC News Africa, some of the people arrested by police were on their way to work:

On Thursday, the Information Minister told people not to attend the protest, citing concerns a peaceful protest could be taken over by 'hoodlums.' The toll gate has been closed since October 20 when armed forces opened fire at unarmed protesters, after weeks of #EndSARS protests.

#OccupyLekkiProtest #occupylekkitollgate they’ve now privatised/outsourced policing to LCC thugs, this is a new level of impunity. How could LCC officials be making arrests & detaining Nigerians? LCC was complicit in #LekkiMassacre & now they are even more brazen #revolutionnnow pic.twitter.com/QWihGkX7gD

Another Twitter user shared that would-be protesters were met with “brutality and arrest”:

Let it be known pic.twitter.com/LiIkPteOlf

Meanwhile, lawyers and organisers have reported that police are transporting would-be protesters out of Lagos and denying them access to legal counsel:

They are not letting lawyers see the arrested protesters.

The Police said they have direct orders from the Lagos State Governor to arrest protesters & known frontliners of the #EndSARS protests & will soon move them to Ikeja.

Jide SanwoOlu, are these forces beyond your control?

UPDATE: The Police got 3 Danfos (commercial transport buses) and moved the arrested protesters. We are told they will be moved to Ikeja Area command.

Our 3 lawyers were not allowed any access into the premises or to the arrested persons. We have deployed lawyers to Ikeja now. https://t.co/5rUxH1ZPWd

More police have turned up in riot gear. There are zero protesters at the #Lekkitollgate. pic.twitter.com/8LuYPRm648

It appears that police have successfully stamped out the planned peaceful protest, and reopened the toll gate:

Traffic is flowing freely at the tollgate now.

At the moment it's just the press & the police. pic.twitter.com/BJ9YUbGxif

Reacting to state suppression of the planned protest, Tope Akinyode labelled Nigeria’s political situation a “dictatorship”. And he called on Nigerians to challenge it:

Full blown dictatorship is upon us, Nigerians must resist this #EndSARS

By denying Nigerians their right to assembly and peaceful protest, the government has sent a clear message: it intends to keep suppressing the youth-led movement against police brutality and bad governance. It must answer for its corruption and incompetence, and it must listen to young Nigerians. If the government continues down this path of destruction, the consequences will be devastating.