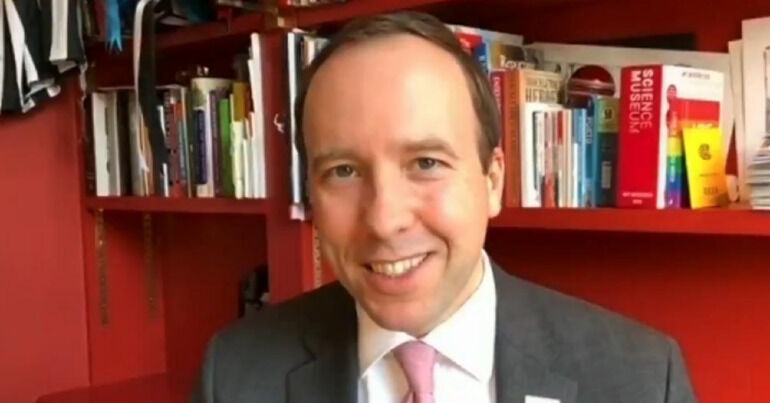 It should no longer come as a surprise, watching Matt Hancock give himself a pat on the back for how he’s handled the coronavirus (Covid-19) pandemic. It should also come as no surprise that he accepts zero responsibility for almost 121,000 deaths in the UK. Our death toll has shot past that of Italy, and is now by far the highest in Europe.

But Hancock’s audacity flew off the chart on 23 February when he insisted that his team should be thanked, and that there had been no national shortage of PPE. Does Hancock think that a successful roll-out of vaccines will magically make us forget how the government has failed, and how it essentially left our NHS workers and care home residents to die, without giving them adequate protection from the virus?

No shortage of PPE? Really?

Hancock has been accused before of gaslighting the public, trying to convince us that events that happened didn’t actually happen at all. It seems he hasn’t learned his lesson. On today’s Sky News, Hancock said:

There was never a national shortage [of PPE].

But if Hancock thinks he can gaslight us again, he’s wrong. A National Audit Office report about the supply of PPE stated that the “government’s structures were overwhelmed in March 2020”, and as the virus first hit UK soil, newspapers reported on the scarcity of PPE throughout the country. In April 2020, The Canary stated that:

PPE shortages reportedly persist for NHS staff after initial delays in equipment delivery. Meanwhile, the Local Government Association (LGA) has warned that “vital life-saving personal protective equipment for frontline care workers will run out within days”. The LGA has criticised the government’s delay in rolling out a new central government website to moderate PPE supply and distribution.

Meanwhile, back in May 2020, Channel 4 reported that 200 million pieces of kit, including masks and respirators, had reached their expiry date in the months before the pandemic hit. Britain’s stockpiles of PPE also shrank “significantly” between 2009 and 2019.

It was local people who pulled together to make our health workers the PPE that wasn’t provided to them by the government. People have expressed their outrage on Twitter:

So sorry to keep bringing this up but it’s important to me @MattHancock on Sky news saying there wasn’t a shortage of PPE. I had to buy my uncle, a nurse on a Covid ward, a face shield off amazon, he found some masks in a cupboard on the ward, there was a shortage and a panic https://t.co/8a4lKSC96f

Good morning @MattHancock. Your claim that there was never a shortage of PPE is not only a lie, it is also a disgusting insult to everyone who has put their lives at risk working on the frontline without adequate PPE and to the families of frontline workers who have died. pic.twitter.com/dyJe0TiBg5

On 19 February, the High Court ruled that the government had acted unlawfully by failing to disclose coronavirus (Covid-19) contracts. A judge said:

There is now no dispute that, in a substantial number of cases… [Hancock] breached his legal obligation to publish contract award notices within 30 days of the award of contracts.

There is also no dispute that… [Hancock] failed to publish redacted contracts in accordance with the transparency policy.

But as The Canary pointed out, despite this ruling, Labour leader Keir Starmer refused to call for Hancock to quit. And instead of apologising, Hancock said on 23 February:

It’s in the national interest that we did what we did.

The Canary has previously reported how multi-million pound PPE contracts were awarded to firms with no history of making the protective equipment. We also reported on how a number of the contractors have close ties to the Tories.

Yet Hancock had the audacity to say:

Are you saying that if you know a minister then you shouldn’t be allowed to have contracts?

He argued that there had been “enormous amounts of scrutiny” of the contracts, and continued:

the contracts in question, I didn’t have personal involvement in the signing of the individual contracts. But, sure, what I did do is make sure that my team were given all the support they could to buy PPE to save lives.

But Labour MP Dr Rosena Allin-Khan pointed out on Twitter:

On the other hand was a smash-and-grab of Tory donors getting PPE contracts, which meant the Govt ordered 5x more than it needed, some prices inflated 1,400% for 25 billion extra items we won’t ever use.

There was no need to order so much, most of it is being stored overseas.

We didn’t need either of these situations, we just needed enough to keep frontline workers safe, plus a few months stock. The only reason to order so much, was so people could get rich, quick. It’s unforgivable.

Hancock doesn’t deny that he broke the law

Hancock also appeared on Good Morning Britain and, once again, instead of apologising for acting unlawfully, he argued:

I think we should be on this programme thanking my team.

We just expect our cabinet ministers to abide by the law… if you do get caught breaking the law, we just expect you to say sorry. You don’t agree. We’ll have to disagree.

To which Hancock smiled and said:

That’s it. That’s a fair summary of the situation, I think!

The health secretary doesn’t deny breaking the law and yet refuses to apologise. As he smiles into the camera for Good Morning Britain, it’s clear that he thinks he’s untouchable. He’s not, and he must be held accountable.