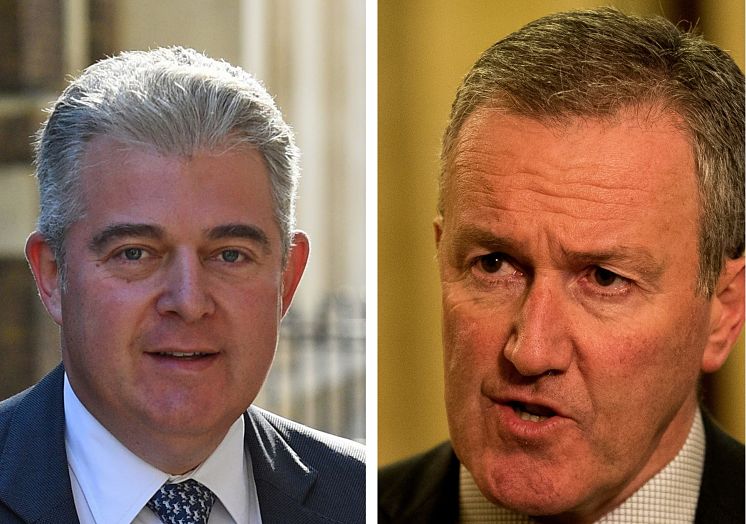 Secretary of state for Northern Ireland Brandon Lewis has dismissed claims from Stormont’s finance minister that he does not have the money to fund a victims’ payment scheme.

The remarks come amid an ongoing stand-off between the Northern Ireland Office and Stormont Executive over who will foot a potential £1.2 billion total bill for the delayed payments for those injured during the conflict.

Earlier this month, the Court of Appeal in Belfast ruled that Stormont had a legal duty to fund the payment scheme for injured victims of the conflict. It made no finding on the source of that funding. Instead it gave the Executive and Northern Ireland Office four weeks to agree a solution.

During the ongoing impasse, Lewis has singled out Murphy and Sinn Féin for criticism. On Wednesday, the Northern Ireland secretary again criticised the Stormont minister.

With a £15 billion (Treasury) block grant from the year where they’ve had an underspend, that they can’t find the few million pound they need to find for what is a priority, what’s been a legal commitment, what has been there since 2014, for the Sinn Féin Department of Finance minister to continue to delay this is untenable. How can he stand there and say with any kind of credibility that from a £15 billion block grant approximately, that he is not prepared to make decisions to allocate a few million pounds to the victims’ payment scheme that they are committed to since 2014?”

The Conservative MP said the situation emphasised the need for the finance minister to press ahead with setting up a delayed independent spending oversight body.

Stormont parties committed to establishing a Fiscal Council in the New Decade, New Approach deal to restore powersharing. The independent body, which was supposed to be set up by July last year, was designed to conduct an annual assessment of the Executive’s plans to balance its budget. It would also examine the ongoing sustainability of departmental finances and assess the effectiveness of long-term efficiency measures.

Lewis said such a council could provide “transparency” on Murphy’s claims that there are not sufficient funds to pay for the victims’ scheme.

But Murphy disputed Lewis’s position, and also said the first year estimate is as high as £145 million. Accusing Lewis of “dithering and delay”, Murphy said the UK Government should pay for the scheme because it legislated for it as Westminster. he said:

Funding for it also needs to come from there.

The Executive’s budgets are already stretched and the pension could amount to costs of up to £1.2 billion.

It is time the British Government acted to pay for the scheme it created so that victims should not have to face any further delays.

Arlene Foster, meanwhile, has made clear that victims will get their payments, regardless of who ultimately funds them.

The Executive has recently received costing predictions from the government’s Actuary Department based on numbers provided by the Executive Office.

Those range from £600 million to £1.2 billion for the lifetime of the scheme, with a central estimate of £848 million.

The scheme should have been open for applications at the end of May last year. It was first delayed when Sinn Féin refused to designate a Stormont department to administer it. The party objected to government eligibility criteria that excluded former paramilitaries convicted of causing serious harm.

O’Neill eventually agreed to nominate a department last August following a highly critical court judgment that found she had been acting unlawfully.

However, the separate stand-off involving the Government and the wider Stormont Executive over funding remains unresolved.