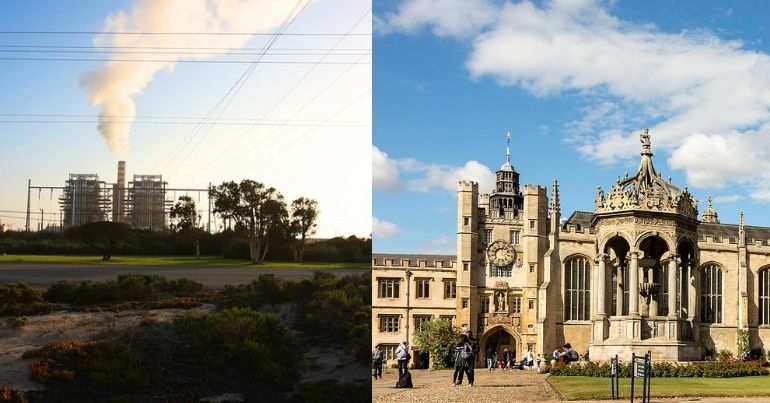 After four years of student campaigning, Cambridge’s Trinity College has promised to divest fully from fossil fuels in the next 10 years.

Trinity is only the third Cambridge college to promise full divestment. The university as a whole has promised divestment by 2030, with no distinction between direct and indirect investments.

HUGE! Congratulations to the students, staff and alumni who have been campaigning over the past 5 years to move the college's £1.5bn endowment fund out of fossil fuels 💪

A 2018 investigation found that Trinity College had at least £9.1m directly invested in gas and oil extraction, exploration and production. £8.2m of this was invested in the 100 companies responsible for 71% of all global emissions.

The 120+ college alumni who called for the college to divest earlier this year have celebrated the decision.

Trinity Alumni for Divestment welcomes Trinity College’s momentous decision to divest from the fossil fuel industry. By divesting from fossil fuels, the college is sending a powerful political message: that it will no longer support the most destructive industry on the planet. This decision would not have been made without years of sustained pressure from Trinity’s students and alumni.

Divesting from fossil fuels will benefit the future of its students and alumni, but is also a first step to discharging Trinity’s responsibility, as a wealthy institution situated in the Global North, to frontline communities suffering first and worst from climate impacts. As alumni, we hope the college will continue to leverage its significant endowment to make positive change by severing its ties with all destructive industries, including arms and industrial agriculture.

Severing ties with all destructive industries

While campaigners as a whole welcomed the decision, students affirmed their commitment to calling for colleges to stop investments in arms and agriculture.

In 2018, Varsity reported that Trinity College had investments of nearly £2.5m in arms companies such as BAE systems and Caterpillar Inc.

In 2019, the college “screened out direct investments in companies that are associated with controversial, civilian and nuclear weapons and tobacco, that derive revenues from thermal coal and oil sands extraction and that are not compliant with the United Nations Global Compact principles”.

Despite this, campaigners say the college’s index fund does not screen all investments, such as those from Caterpillar Inc and Rolls Royce.

Zero Carbon celebrates the enormity of Trinity College’s historic (and long overdue) divestment decision, recognising the central role that fossil fuel companies continue to play in the climate crisis. We hope that this will inspire other Cambridge colleges to follow suit, and praise the committed students, staff, and alumni who have been campaigning tirelessly on this issue over the past four years.

The fight for climate justice goes well beyond the divestment movement however, and this must be only the first step in the College’s rejection of destructive industries: while Trinity maintains investments in arms companies, and banks with Barclays – the biggest funder of fossil fuel infrastructure in Europe – there is still work to be done. We continue to demand that Cambridge University and Colleges urgently sever all ties with destructive industries.

Yes 👏🏼 But pressure must be kept up to ensure Trinity does not move these investments into its already staggering portfolio in arms companies including BAE Systems, Caterpillar Inc, General Dynamics & Lockheed Martin https://t.co/pdnLic4wzk

BaBoom! This is a massive one for #FossilFree UK unis campaign. Big props to students who kept unrelenting pressure on Cambridge colleges to do the right thing with their huge endowments.

According to People & Planet, 85 UK universities have made some commitment to divesting from fossil fuels.

The divestment movement defines direct investment as investment in any of the top 200 coal, oil and gas companies. Indirect investments are within funds blending assets from a range of accounts, with not many managers offering fossil-free funds. These investments therefore usually take longer to remove.

That the one-time home of Isaac Newton now embraces divestment is a powerful reminder of the great, undeniable physical realities our planet now faces: Trinity’s stand here will echo loudly, precisely because of the history of scientific scholarship it embodies. Those who fought long and hard for this day have done the future a great service.