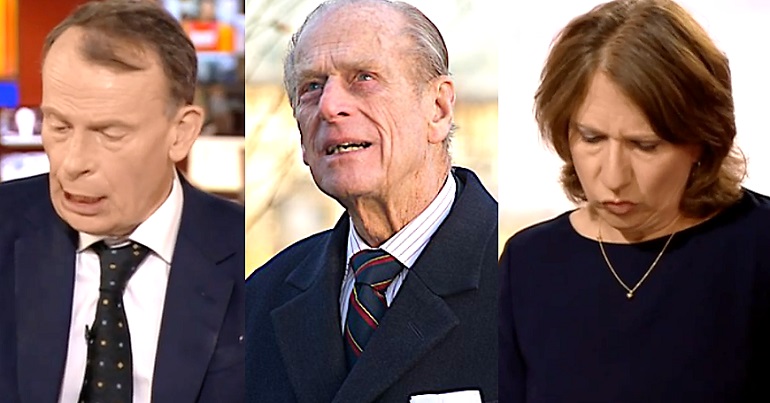 Just over a minute of truth appeared on the Andrew Marr Show on Sunday 11 April. It involved the BBC‘s contentious coverage of the death of Philip Windsor (the duke of Edinburgh). And it came from an unlikely source. Because a corporate, centrist journalist called out the state broadcaster’s “syrupy” and “clichéd” coverage.

As The Canary previously reported, the BBC went onto an almost wartime footing when Windsor died. Tom Coburg wrote:

On the evening of Friday 9 April, the BBC went wall-to-wall in its coverage of the death of Philip… BBC 1 and BBC 2 provided the same content for the entire evening, and all BBC4 programmes were cancelled. Subsequently, the state broadcaster was forced to publish a complaints page on its coverage (but it has since been removed).

BBC scheduling returned to normal during the afternoon on Saturday 11 April. But many people were still angry about it. So, enter the Atlantic‘s Helen Lewis on Marr to drop a truth bomb.

The host put it to Lewis that there had been “lots of complaints” about media “coverage” of Windsor’s death. Marr didn’t specifically mention the BBC. But Lewis certainly did. She said:

it was probably the wrong decision editorially to completely shut down BBC2 and run the same programmes as BBC One; to shut down BBC Four for the night

Indeed. BBC Two lost 65% of its previous Friday’s viewing figures. BBC One was down 6%. So why did the state broadcaster do this? Lewis thought she knew:

it was probably the right decision politically. And by that I mean the fact that annoying a lot of people who wanted to watch the Masterchef final is probably better for the BBC than annoying backbench Tory MPs who would then spend the whole weekend complaining about a lack of respect for the Royal Family and for Britain.

Marr tried to rein Lewis in. He put it to her that the BBC made the right decision for:

those generations who would turn to the BBC for… old fashioned, serious royal coverage at a moment like this.

Lewis kind-of agreed. But she did it with the caveat that:

“Yes. Umm. Err…” was all Marr could say in response:

Not a good look for Marr when even the most centrist of corporate journalists can spot what the BBC is up to. And an independent journalist took Lewis’s thoughts a few steps further.

The ‘old normal’ for the BBC?

Jonathan Cook wrote about the BBC and the corporate media’s coverage of Windsor’s death. He said that it “may look exceptional”. But actually, Cook said it was “entirely routine”:

My latest: The wall-to-wall propaganda we are subjected to on the death of a royal may look exceptional but it is entirely routine. It is simply that in normal times the propaganda is better masked, wrapped in the illusion of choice and variety https://t.co/1oNs2nWcYo

He broke it down into four “lessons”. He wrote that “There is absolutely no commercial reason for the media to be dedicating so much time and space” to Windsor’s death.

Cook went on to say that the BBC did what it did for two reasons:

The truth is that all of these factors have played a part. Corporate media is not just there to make quick profits. Sometimes, it is seen by its billionaire owners as a loss-leader. It is there to generate a favourable political and social climate to help corporations accrete ever greater power and profits.

This is yet again Noam Chomsky’s Manufacturing Consent. In reality, BBC servility to the establishment and corporations isn’t new. But in the third decade of the 21st century it’s stepping up a gear.