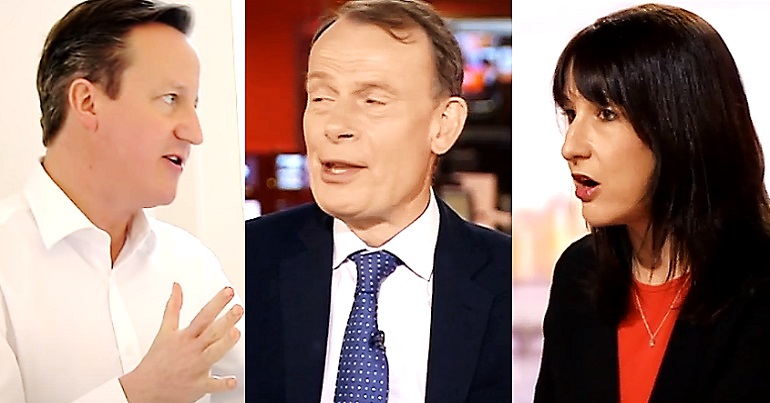 You may need to sit down. Because shockingly, the Andrew Marr Show effectively whitewashed the Greensill Capital scandal on Sunday 18 April. Ahem.

What’s the deal with Greensill?

The Canary has been reporting on the Greensill story. David Cameron is at the heart of it, and people have accused him of corruption. This is because of his lobbying for his mate Lex Greensill, who was the owner of Greensill Capital. Greensill worked for Cameron as an adviser when Cameron was PM. Then, when Cameron quit, he in turn went to work for Greensill. During the coronavirus (Covid-19) pandemic, Cameron got in touch with his mates in government. He asked for them to help Greensill get access to a coronavirus loan scheme. But the Tories didn’t give Greensill one, so it went bust.

The story just keeps on getting more toxic. Chancellor Rishi Sunak and health secretary Matt Hancock have both been implicated. And as The Canary’s Tom Coburg wrote, the stink of corruption keeps deepening. This is because Boris Johnson has put fellow Tories in charge of the investigation into Greensill.

So, if all of this was making senior Tories squirm – fear not. Because Andrew Marr has got their backs.

He interviewed shadow Cabinet Office minister Rachel Reeves. Marr put much of the focus on Labour having similar skeletons in its closet over dodgy lobbying. Reeves, meanwhile, kept calling this “Tory Sleaze”. “Sleaze” implies something like a sex scandal. So, as people said on Twitter, this does little more than whitewash what is actually corruption:

Let's not use the euphemism of 'cronyism' any longer. This is way, way beyond that. This is the theft of taxpayers' money. This is rotten, stinking corruption at the heart of the Tory project. #TorySleaze #ToryCorruption https://t.co/IFMi8FnLGj

Reeves swerved Marr’s questions about Labour politicians and their lobbying. But she did make a crucial point about Greensill. Reeves said the inquiry Johnson has started was being “chaired by one of… [his] friends”:

This is crucial. As Coburg wrote:

Boardman is a senior consultant at the law firm Slaughter and May. Its lawyers worked “as an integrated team with Treasury legal advisers” in setting up the Covid Corporate Financing Facility (CCFF). This is the very scheme to which Greensill applied for a loan.

Boardman is also a non-executive director of Business, Energy and Industrial Strategy, the government body that oversees the British Business Bank.

And as chair of the Audit and Risk Assurance Committee, it could be argued that Boardman has been appointed by Johnson to investigate himself

So, would Marr raise the issue of this rigged inquiry with a Tory minister? Only briefly.

Enter Marr to try and whitewash

Marr spoke next to environment secretary George Eustice. The BBC Politics Twitter account shared bits of this. Firstly, it shared a segment where Marr asked Eustice if he thought Cameron’s behaviour was “acceptable”:

Environment Secretary George Eustice: "The key thing is that he’s not broken any of the rules… it is acceptable"https://t.co/3NZvUMb0u4 pic.twitter.com/Xi2iWEP4Ib

Then, BBC Politics shared Marr asking Eustice if he thought the public have “a right to know who is lobbying ministers about what and when”:

#Marr: Should the public know who is lobbying ministers about what and when?

He asks Environment Secretary George Eustice why Matt Hancock's meeting with Greensill was not disclosedhttps://t.co/7kLMAig3nM pic.twitter.com/qgDmqL8QrZ

But BBC Politics did not include the most crucial question Marr asked. He put it to Eustice that:

Eustice’s response, in short, was ‘well, a Labour MP would say that’. So, Marr left the issue there. And here’s the problem.

Covering up the cover-up

It’s fairly obvious that Cameron’s actions reek of corruption. It’s also fairly obvious that lobbying is a systemic problem. That was the story weeks ago. Now, the biggest question mark should be over the Tory government’s blatant attempts to start whitewashing this. But Marr’s interviewing was either wagging his finger at Labour or probing a Tory minister about yesterday’s news.

There will likely be many more scandals. As to the outcome of the investigations into these scandals, they’ll undoubtedly conclude that lessons must be learned and rules tightened, etc.

In other words, business as usual.

Marr’s weak appraisal of the Tory’s incoming cover-up is just as much business as usual as Cameron’s dodgy deals.

Featured image via the Sun – YouTube and the BBC iPlayer – screengrabs