A BBC report on Gaza shows its disgraceful bias - The Canary 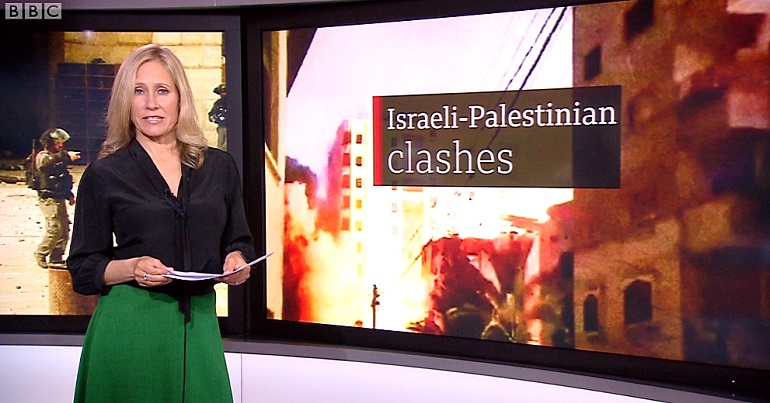 The BBC‘s reporting on the situation in Gaza has been little more than establishment propaganda. But its specific coverage of Israel’s bombing of the occupied Palestinian territory descended into disgraceful bias.

Much of the world has been watching the situation in Israel and the occupied territories. As of 12pm on Wednesday 12 May, PA reported that Israeli air strikes had levelled two apartment towers in the Gaza Strip. Hamas said Israeli air strikes destroyed the central police headquarters in Gaza City. The death toll in Gaza rose to 35 Palestinians, including 12 children, with some 233 people injured. Israel claimed that Hamas rocket fire killed five Israelis, including a child, on 11 and early on 12 May.

PA also reported that Israel’s destruction of apartment towers in Gaza was among several tactics used during the 2014 war. These are now the subject of an investigation by the International Criminal Court (ICC) into possible war crimes. Israel is not a member of the court and has rejected the probe.

The situation which led to this point has been brewing for weeks.

is the culmination of weeks of Israeli violence in Jerusalem that have included Israeli forces shooting dead a 16-year-old boy and hundreds injured. …

So, amid all of this, it seems fairly obvious that while there are two sides to this story, Israel’s deadly actions and provocation dwarf that of Hamas’s. But if you’re the BBC, this isn’t the case.

Enter the BBC with a tin of whitewash

It broadcast a segment during its News at Ten bulletin on Tuesday 11 May. But it failed to mention Israeli forces killing 16-year-old Saeed Odeh on 5 May. The BBC said the situation “follows weeks of boiling tensions in Jerusalem”. But again, it failed to mention what happened on 10 May and Hamas’s ultimatum. Instead, reporter Tom Bateman framed it as:

the casualty figures on both sides have continued to grow. But it is also the scale of firepower used by militants in the Gaza Strip in a single round, reaching deep into the heart of Israel, that makes that one of the biggest episodes between the two sides in recent memory. It looks, for now, like only escalation is possible – despite the repeated international calls for calm.

In other words, the BBC is framing the situation as Hamas being responsible for what’s happening.

Of course, the group is not absolved of responsibility. But as journalist Omar Baddar tweeted, media outlets like the BBC‘s narrative is intentionally “misleading… [their] audience”:

2) Then Israel escalates through evictions/beatings/shootings

3) Then some Palestinians respond w/violence

If u start reporting at #3, you're misleading your audience.

But this kind of reporting is endemic of wider coverage. For example, DW News reported that in Gaza nine children “have been killed in fighting with Israel”. But as musician and activist Lowkey summed up:

How were the children fighting? https://t.co/oiVBFYbXXr

Moreover, the situation with the BBC is not new:

Meanwhile, the reality is:

If the corporate media challenged the situation in the Palestinian occupied territories, then by default it would be challenging the entire status quo of society more broadly. That is, of course, never going to happen.