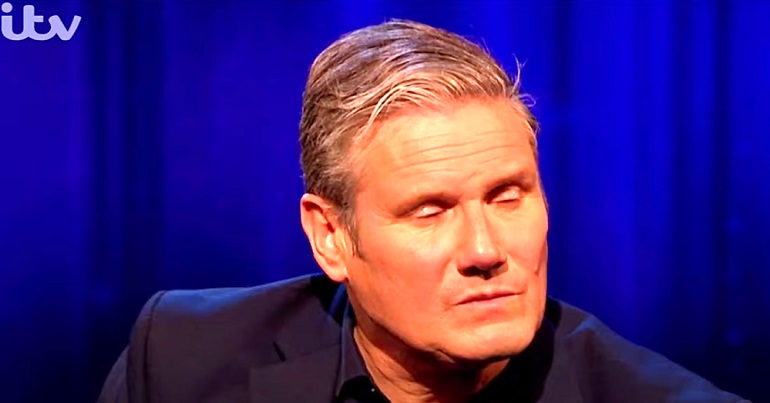 The latest YouGov polling has shown a bounce for the Labour Party. It comes in the wake of leader Keir Starmer’s interview with Piers Morgan. But don’t get too excited – because blink and you’d miss the miniscule increase.

Morgan interviewed Starmer on Tuesday 1 June on ITV’s Life Stories. As SKWAWKBOX wrote, the show was “an embarrassing performance” from the Labour leader. BBC News wrote:

Asked by Morgan about criticism that he doesn’t show enough emotion, the Labour leader said: “There is a huge passion [in me], but passion comes in different shapes and sizes.”

He promised a tour of the country over the summer to speak to people “who are no longer voting Labour and hear for myself what they have to say”, appealing for the public to “let me get out there and let me take the mask off”.

“Take the mask off”? So, Starmer has been hiding his true feelings and politics all this time? Who knew?

Stick to the script

As SKWAWKBOX reported, after the show some Twitter accounts were churning out similar scripts:

I judge people as I find them, I’ve always found @Keir_Starmer to be warm and considerate, with a steely dedication, drive & passion 4 his work. A top professional & top bloke, I'll hear nothing else’s on the matter. #KeirStarmer would make a superb #PrimeMinister #LifeStories pic.twitter.com/HQMiUen39e

I judge people as I find them, I’ve always found @Keir_Starmer to be warm and considerate, with a steely dedication, drive and passion for his work. A top professional and top bloke, I will hear nothing else’s on the matter. Keir would make a superb Prime Minister #LifeStories

SKWAWKBOX said it was:

But sadly for Starmer and his team, all the copying and pasting on Twitter and personal stories on Morgan’s show don’t seem to have worked. Because if Life Stories did affect YouGov’s latest polling, it resulted in just a 1% increase; oh – and the Tories gaining an extra 3%:

After Keir Starmer's much-heralded appearance on Piers Morgan's #LifeStories, and the publication of a photo of him as a student looking like the lead singer of Beige Country, an MOR Big Country tribute band, Labour are now 20pts ahead.*

And as Stats for Lefties crunched, this poll would turn into the worst election defeat for Labour since 1935:

Every single data point – polls, approval ratings, Best PM polls and election results – is telling us that Keir Starmer is disastrously unpopular. He lost 300+ seats in May!

And yet Starmer's fans continue to insist that everything is absolutely fine!

If a prime time TV appearance only musters an extra percentage point for Labour in the polls, then there’s little hope for Starmer. He’d be best off following Boris Johnson’s lead – and do any future media appearances from the inside of a fridge.