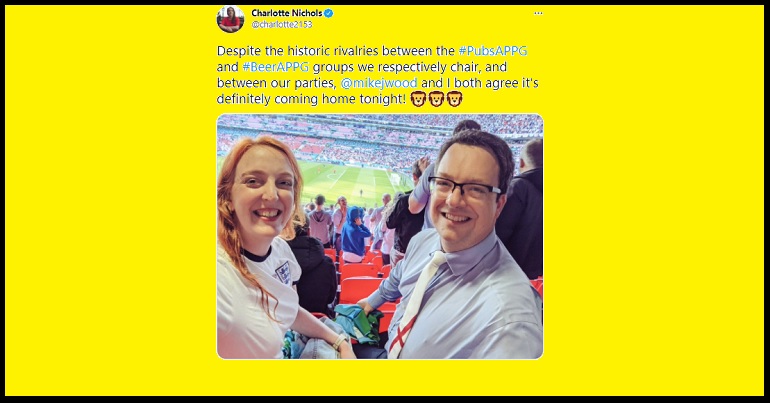 A shadow cabinet Labour MP who had to apologise for handing out racist leaflets has once more caused a storm on social media. But this time, she fails to see why people have a problem with her tweets.

Charlotte Nichols is Labour’s shadow women and equalities minister. As The Canary previously reported, she caused a storm on the local elections campaign trail. This was because Nichols handed out leaflets about the Gypsy, Roma and Traveller (GRT) community that were described as racist. As The Canary‘s Sophia Purdy-Moore wrote:

The leaflets in question claimed that locally Labour would ‘deal with traveller incursions’. Meaning “sudden” unexpected or unwanted appearances.

Nichols apologised. She claimed she didn’t know what “incursion” meant. But now, she’s once more shown she’s perhaps not quite the ‘Labour’ MP some would hope for.

Nichols went to see England play Denmark in the Euros semi-final on Wednesday 7 July. But this was no ordinary visit to a football match. Because she went with Tory MP Mike Wood:

Despite the historic rivalries between the #PubsAPPG and #BeerAPPG groups we respectively chair, and between our parties, @mikejwood and I both agree it's definitely coming home tonight! 🦁🦁🦁 pic.twitter.com/SkRLgSmimS

Heineken had invited the MPs. This is because Nichols leads the All Party Parliamentary Group (APPG) on pubs, and Wood the one on beer. People on Twitter we’re not happy. So much so that Nichols had to put out another tweet explaining herself:

I see I'm getting dunked on for having a photo with a Conservative MP yesterday at Wembley, where we were kindly hosted given our APPG roles by one of the sponsors of the tournament.

An APPG is an "All Party Parliamentary Group". The clue is in the "all party" bit 🙃

There is quite a lot to unpack here. But Twitter helpfully gave it a go.

First is the issue of the APPG on pubs’ chair cosying up to Heineken. One Twitter user pointed out the problem:

The chair of the All Party Parliamentary Group on Pubs was given an all expenses trip to a Euros semi final by Heineken, a company fined £2 million just a few months ago for forcing tied landlords to sell its beer https://t.co/iTZmTgSY2b pic.twitter.com/taFYL2H7hM

The company’s pub business, Star Pubs and Bars, was slapped-down by the industry watchdog for “multiple breaches” of regulations. It said Heineken had “intentionally or negligently” failed to sort the issue out. But clearly, the company’s noxious behaviour doesn’t matter to Nichols when there’s a freebie involved.

Also, the story poses bigger questions about the role of lobbying in parliament:

There's a pubs All Party Group of MPs AND a beer All Party Group and they swan around being 'entertained' (bribed) with freebies at Wembley and . . . well you can imagine where else. They are taking the piss-up out of us all. https://t.co/tDktW1SZrp

Not that Nichols and her whataboutery noticed:

This is why we have the register of members interests, which this will be going into, and which is available for scrutiny if anyone believes that has been the case.

And, frankly, I don't believe any England fan that says they wouldn't have taken the opportunity if offered.

Throwing the GRT community under the bus

Then, what could be more appropriate as a Labour MP who previously handed out racist, anti-GRT leaflets, and who missed the demo in support of the community, than to enjoy a night out with Priti Patel’s parliamentary private secretary?

these people treat an old gardening enthusiast as the biggest evil to ever walk the earth, but when given the chance to hang out with priti fucking patel’s parliamentary staff, they’re smiling from ear to ear. https://t.co/BSi8wSaFes

Yes, Nichols was schmoozing with a Tory MP who works for the person behind the racist Police Bill. Interestingly, Wood also used the term “incursion” to describe GRT people:

I spoke to Dudley Council earlier his afternoon, and Kingswinford councillors have also been working on it. Council believes that court order issued during previous incursion is still valid and they expect travellers to be gone quickly.

Clearly the GRT community still isn’t at the forefront of Nichols’ mind. Because as well as hanging out with Wood, she also appeared to miss the #Drive2Survive demo in support of them:

Some Labour MPs spent yesterday at the GRT demonstration against the Police, Crime, Sentencing and Courts Bill.

Others spent it having a laugh with the politicians who have crafted the Bill that amongst other things criminalises GRT communities. pic.twitter.com/JWbIQoEsWy

But there’s a broader point to be made about Nichols’ behaviour.

If you lie down with dogs you get up with fleas, I'm afraid. I'm a disabled person on legacy benefits, I'm not interested in seeing anyone who claims to represent me yukking it up with the people who are actively threatening my life.

Ah that’s so unfair 😢 MPs getting freebies whilst those on UC just about to be stripped of £20 a week and disabled are dying in their thousands because of losing £30 pw. But poor you. How absolutely awful for you. #EstablishmentNeedsRemoving pic.twitter.com/BvMgQTcCGV

Labour MPs being friendly with Tories has been a historical problem. Under the guise of cooperation for the greater good, so-called left-wing politicians have snuggled up in political bed with the right, because we all have to work together – yes?

No, we don’t. It’s this weak (and often ineffective) opposition which has led us to this point. Countless unnecessary deaths from coronavirus (Covid-19); “grave” and “systematic” violations of chronically ill and disabled people’s human rights, and 130,000 deaths from Tory austerity. Our two-cheeks-of-the-same-arse political system is broken.

To politicians like Nichols, being MP is clearly a game of political football. It’s one where you fight against your opponents for a short amount of time. But when the whistle blows, you’re all mates, really.