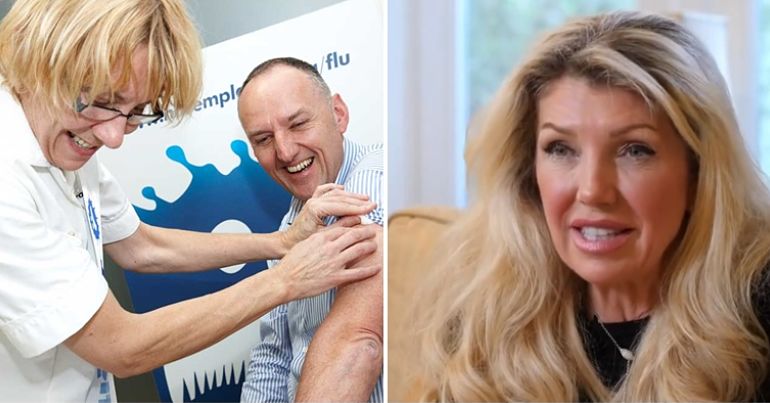 On Saturday 24 July, anti-vaxxer and anti-lockdown protesters gathered in London’s Trafalgar Square. Yes, peaceful protest is everyone’s right. But life-threatening comments, comparing NHS staff to Nazis, are not. And calling such remarks “utterly appalling” or depraved doesn’t even cover it. Because no amount of condemnation is enough.

However, an outpouring of support for NHS staff was the ideal way to respond to such hate.

And it was overwhelming…

At Saturday’s rally, disgraced nurse Kate Shemirani made hate-filled comments about NHS staff. Shemirani has been struck off the Nursing and Midwifery Council register because she:

attempted to encourage people to act contrary to public health guidance issued by the UK government by spreading this information through social media platforms and at public events.

She bellowed (with a certain 1930s tone in her voice):

Ask those that are giving it (the vaccine), has there been any deaths? Ask them what is in it. Ask them, get their names, you email them to me … with a group of lawyers we are collating all that.

At the Nuremberg trials, the doctors and nurses stood trial, and they hung.

Footage of Shemirani’s rant began to circulate on social media. But a combination of shock and support motivated people to get behind the heroes of the pandemic:

Thank you to all my amazing colleagues & everyone that works for the #NHS #gotyourbackNHS pic.twitter.com/MfceJ9gkWh

This is what NHS staff woke up to this morning. A rally talking about hanging doctors and nurses. This has caused considerable distress amongst NHS staff.

If you’re still behind NHS staff please tweet with the hashtag #gotyourbackNHS.

Plenty of my family and friends have been working throughout the pandemic and I have nothing but respect for them and their colleagues. #ThankYouNHS https://t.co/4654cyTOR9

As can happen when you engage in a discussion with coronavirus (Covid-19) deniers, you’re often left dumb-founded by their response. And one question you often hear is ‘do you know anybody who has died from it?’.

Well, this doctoral researcher came up with the ideal response. She tweeted:

This is on the government

As reported by The Canary, this government has treated NHS staff disgracefully. The derisory 3% pay increase demonstrates that perfectly. And instead of supporting the NHS and its staff, it appears the Tories want to sell it off.

There is without doubt a large number of people attending anti-lockdown and anti-vaccination rallies. But attendance isn’t necessarily an endorsement of all the ludicrous claims from the vocally ignorant who take centre stage. Also, perhaps government and mainstream media played a part in the fuelling of such claims.

It’s more likely that these large numbers are a reflection of an inept Tory response to the pandemic. And it’s a callous response that puts profit before people. So rather than spreading hate and unfounded conspiracy theories, maybe the conspiracy merchants could focus on the government’s failures. And maybe for once, the government could take responsibility for its neglect of the NHS and disrespect of its staff.