It's been a weekend of woe for Keir 'Calamity' Starmer - Canary 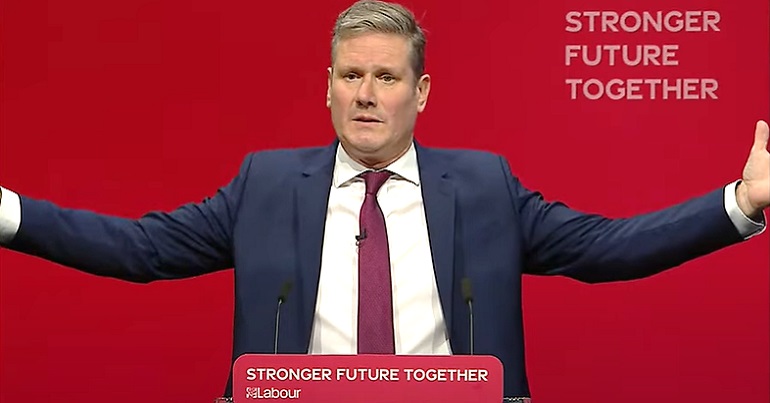 It was a super shambles Saturday for Keir Starmer’s Labour Party on 2 October: lurching from crisis to chaos and back to crisis again. But should we have sympathy for him over his weekend of woe? In short, no.

First up, and the latest Opinium poll movement for Starmer after his headline conference speech was one that went downwards:

The @Conservatives lead increases by 1 point after the Labour Party Conference despite a successful speech by Keir Starmer.

The latest numbers for the @OpiniumResearch/@ObserverUK poll.

Meanwhile, a Survation poll from 30 September had Labour up one point – but so were the Tories. Opinium’s assessment that Starmer’s speech was “successful” is debatable. But it was clear that his centrist cheerleaders thought he did a good job:

And while Sky News polling seemed to show people viewed Starmer’s speech favourably, this didn’t seem to matter in the overall polls. So, what does he do next? He writes an opinion piece for the Sun (don’t click the link!).

Writing for the Sun

The article went on about Boris Johnson’s “incompetence” being a threat to Christmas. But the content of Starmer’s piece wasn’t really the point. Because firstly, it looked wholly ridiculous when compared to the Sun‘s own coverage of Labour in the past few days. Some choice headlines:

Headlines such as these have littered the shitrag recently. So, given the outlet’s stance on Starmer, it’s unlikely that its readers are suddenly going to think, ‘Yeah, that Keir bloke’s alright! I’d vote for him!’.

Here’s Keir Starmer saying he wouldn’t speak to the Sun while seeking the Labour leadership. Now he is writing Op-eds for them.

Where a politician writes for is ultimately their call, but this illustrates a major point: Starmer is as dishonest as Johnson pic.twitter.com/cDVP56BPof

Moreover, many people from Liverpool also objected to Starmer writing for the Sun – understandably so. And just when you thought Starmer couldn’t get any worse, enter the Mail on Sunday to deal the final blow.

It reported (again, don’t click the link!) that three Labour MPs have been in talks with the Tories to defect. The Mail on Sunday declared:

But the Mail on Sunday failed to raise a key question: if these MPs might be considering defection because they’re worried Starmer will lose them their seat at the next election. Of course, the story could just be mischief-making by the paper. But people on social media pointed out a few potential floor-crossing candidates:

I wonder who the three Labour MPs rumoured to be considering defecting to the Tories are? pic.twitter.com/eu8Z24wSAI

Who've you all got pegged as the 3 would-be defectors?

Wonder is Ian Murray one of the three Labour MPs thinking of joining the tories 🤔 he was one of those who was going to the chuka inspired change uk but bottled it in the end 🤔 pic.twitter.com/AJ1jkZXOuh

So, overall, the weekend was a bit grim for Starmer. But given another piece of breaking news, your sympathy for him should be zero.

Labour is reportedly investigating well-known youth member Hasan Patel. He put out a tweet thread summing up what’s going on:

5 months ago, I received an email from Labour’s NEC putting me under investigation for the crime of stressing young people’s disillusionment with the current direction of our party. Now I’ve been given a *second* notice of investigation. I have to speak out.

At this point I don’t know what to do but I know I will not stay silent or give up. I demand to hear from the party leadership about why I’m being silenced. Why am I being singled out? If anyone can help, please reach out to me. Solidarity.

Responding to the news, chair of Young Labour Jess Barnard has accused the party machinery of “intimidation and bullying”. It seems the party’s ongoing purge of left-wing members has got another victim in its sights.

The UK: freefalling into chaos

The shambles in the Labour Party comes at a time when the UK is freefalling into chaos. From Brexit-related fuel shortages to the Universal Credit cut, the public need a strong, coherent opposition. Starmer’s clusterfucking would be hilarious if the country wasn’t in such an awful situation. Because ultimately, his incompetence and wilful inability to oppose the Tories is a detriment to us all.