Manchester was just 'united against the Tories' - Canary 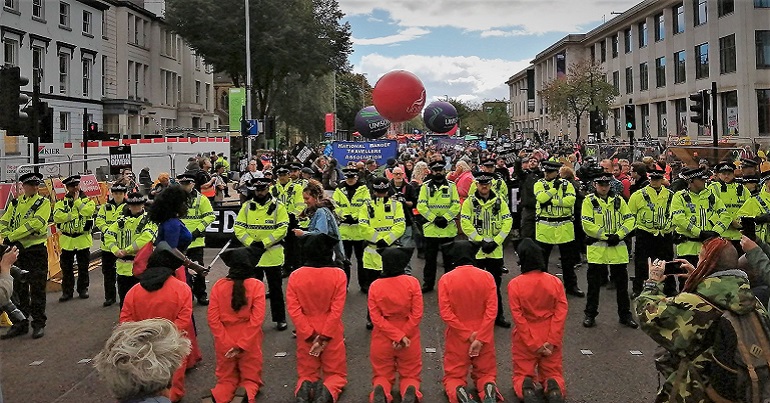 At the start of the Conservative Party conference in Manchester, people have rallied against the party. And those attending made it clear that they were “united against the Tories”.

The anti-austerity group People’s Assembly is holding a “Festival of Resistance” from 2-5 October in Manchester. Talks and workshops are happening across the four days, along with live music and other performances. People’s Assembly is running these in a marquee at Piccadilly Gardens. Events include:

But the main event was a protest on 3 October. And it appeared to be well-supported.

Crowds began to gather from around 12pm at this national demo. It started near Whitworth Park. People’s Assembly used the hashtag #UnitedAgainstTheTories. It reported that “thousands” turned out to march:

Groups at the protest included the:

The Young Communist League and some Marxist groups were also there:

Councillors and MPs from Manchester also turned out to march. And the Gypsy, Roma and Traveller (GRT) community was there; not least because of the persecution they face from the Tories’ Police, Crime, Sentencing and Courts Bill:

@Drive2Survive3 GRT community horses and wagons leading the front of the protest in Manchester! 🐴❤️

Our movement is beautifully diverse. An attack on any of us is an attack on all of us. We are #UnitedAgainstTheTories pic.twitter.com/WBlPZHj8jA

Chants of “Boris Johnson’s a wasteman” rang out:

Groups like Unite Community were also there, calling on the Tories to cancel the £20-a-week cut to Universal Credit. The PCS Union band provided musical accompaniment for the marchers:

There was a police presence and the predictable “evidence gatherers” were snooping around. Meanwhile, police also appeared to be blocking the road that led to the Tory conference:

Overall, a tweet from the People’s Assembly summed up the march well:

The Tories are attacking the elderly and the young. But our movement is intergenerational. Our solidarity is our strength.

Now, the momentum that the group brought to Manchester needs to be built on up and down the country. The fightback against Johnson’s government must continue apace.