As Thérèse Coffey sang her heart out, families across the UK plunged into poverty - Canary 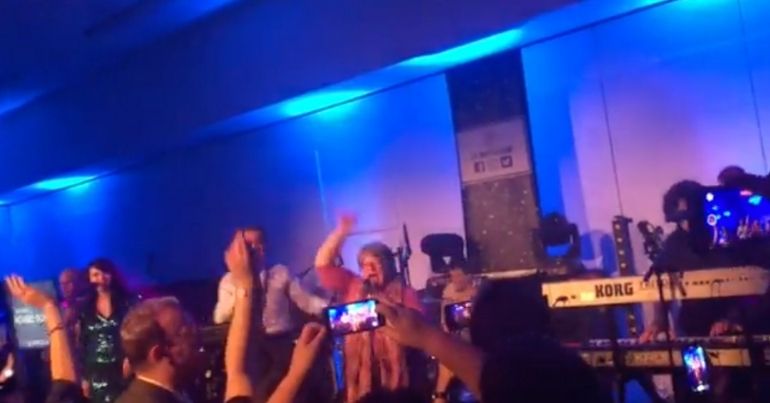 On 6 October, footage emerged of secretary of state for work and pensions Thérèse Coffey singing ‘The Time of My Life’ to Tory party conference delegates. Coffey performed her enthusiastic rendition of the Dirty Dancing hit just an hour after the government’s £20 cut to universal credit came into effect.

Many took to Twitter to express their disgust at the Department for Work and Pensions (DWP) chief’s carefree karaoke having overseen a cut which is predicted to plunge 840,000 more people into poverty, including 290,000 children.

Having the time of her life

DWP Secretary Therese Coffey singing ‘I’m having the time of my life’ at Tory conference just an hour after the £20 Universal Cut came into force. pic.twitter.com/lspuFKGs4Q

While 6 million families went to bed last night in fear of the £20-a-week cut to Universal Credit, @ThereseCoffey, the woman overseeing the cut, was out singing "I've had the time of my life" at the Conservative Party conference. Disgusting.pic.twitter.com/t1lQhYX0ad

This is the biggest overnight cut to welfare Britain has seen. According to the Joseph Rowntree Foundation, it will take £1,040 from around 5.5 million households across Britain each year. Highlighting this, Hertsmere Borough councillor for Potters Bar Chris Myers shared:

At the very moment millions of people, most in work or unable to work, are losing over a grand from their income, Therese Coffey, The Secretary of State responsible is ‘having the time of her life’. #Outoftuneoutoftouch #ToryPartyConference #UniversalCredit https://t.co/oiXU9IiyXU

But at least Therese Coffey is having the time of her life 🤬 https://t.co/LWx1q6AvWX

While @theresecoffey danced and sang her worries away, millions were plunged into poverty because of the Tories cutting #UniversalCredit. Absolutely unforgivable. https://t.co/hG8VAL4FpT

Taking Coffey’s rambunctious rendition of the Dirty Dancing hit as a grim reflection of Tory party culture, Brendan May tweeted:

Therese Coffey singing ‘I’ve had the time of my life’ at the #CPC21 just as the benefits cut comes into force is a new low; the footage a reminder the the Tory Party is a culture free ideological crack den of unsurpassed grimness and vacuity. #ToryBritain pic.twitter.com/RDjCXXHKAP

As they slash #UniversalCredit for millions of vulnerable people Welfare Secretary Therese Coffey is belting out 'I'm having the time of my life' at the tory conference, they are the most grotesque people ever to govern this nation, beyond sickening..

The £20-a-week cut to universal credit will leave most claimants surviving off a meagre £59 per week. Comparing this with Coffey’s extravagant expenses, one Twitter user shared:

Member of Parliament for Suffolk Coastal Teresa Coffey. Has claimed more than £201,000 in parliamentary expenses between 2019 and 2020. "While having the time of her Life" she cut the Universal Credit uplift of £20 to millions of people.

Therese Coffey gets £25 a night food allowance when she stays outside of her constituency. You buy her food while she takes your £20/week from you

Do you get it yet? They don't care about you pic.twitter.com/sbqi4ZrGDz

Ahead of the cut, Resolution Foundation chief executive Torsten Bell explained the devastating impact it will have on millions of households in England, Scotland and Wales. He tweeted:

Whatever this is, it’s not building back better.

Energy bills are set to soar by hundreds of pounds next year.

Meanwhile, Universal Credit has been cut by £20 a week, National Insurance contributions are up and council tax is likely to rise.

This isn't just a winter of discontent – it's years of misery under this government.

The Joseph Rowntree Foundation has forecast that the cut will leave 1 in 3 families living in poverty. Underlining the devastating human cost of the cut, Sultana tweeted:

If anyone says politics doesn't matter, tell them about Sophie, a single mum from Coventry, and the cruelty of the Tories' cut to Universal Credit:

The government’s deliberate cut to universal credit at a time in which the poorest and most vulnerable in society need more support than ever is nothing short of inhumane.