Centrists are creaming themselves over Rory Stewart again - The Canary 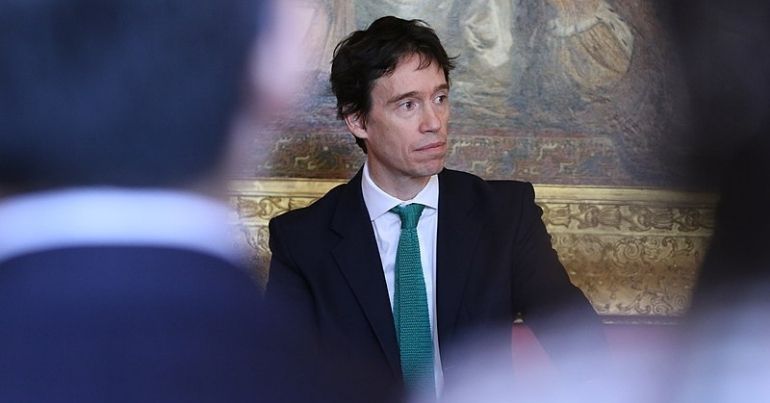 It’s that time again. The time when arch-Tory Rory Stewart says something incredibly obvious that the left has been saying for years. The difference is that he does it in an incredibly posh voice, and thus centrists go absolutely wild about it.

This time it’s due to him revealing that Boris Johnson is bad (wow, original), and that he should resign (you don’t say!?). Despite being extremely banal in every way, the interview clearly excited the following gentleman whose political views are “deep woke, mask-wearer, bunny hugger, hard centrist, 📷 girly swots, 📷📷anti Brexit, mountain biker, bookshop owner, hard remainer, anti fascist. EU citizen”:

Rory Stewart is on fire!

Twitter user ‘Kercle’ was quick to express their admiration for Stewart. Their notable error was suggesting Stewart’s Toryness is past tense, as if it’s somehow subsided since he left electoral politics:

There Ive said it 🤣

Edwin Hayward, author of a book on ‘Brexit unicorns’, celebrated this bad Tory’s “minimalist clarity”, whatever that means…

In just over two mins, Rory Stewart skewers Boris Johnson like a kebab – and every word rings completely true. Such minimalist clarity is impressive! https://t.co/Y2mwhlTkap

Andy Sawers could barely contain himself on Twitter at the idea of Tory Rory pronouncing on things:

Why why why did Rory Stewart not win the Tory leadership??? Intelligent, hugely knowledgeable, thoughtful. Instead, we got…? https://t.co/X7Lvq8zElU

To be fair, some people have cottoned on to Stewart’s enduring Toryness. Journalist Rebecca Wilks suggests we can 100% do better, “babes”.

The way people react whenever Rory Stewart says something a bit snippy is always such a reminder of how low our collective political standards are. Babes, we can do better x

Scholar Peter Mitchell, who’s recent book Imperial Nostalgia positions Stewart as a colonial boy adventurer who somehow endured into the era of smart phones, questioned whether Stewart was, in fact, a real person:

once again i must try to convince you all that Rory Stewart simply does not exist, he is a chimaera, a will-o-the-wisp, a melancholy aberration of the post-imperial brain https://t.co/anlHqcQyKH

But Art Crunch probably captured the mood best when he pointed out that Stewart was merely pointing out what was pointed out years ago. Just not by the kind of posh, right-wing Tories whom centrists so adore:

It's bizarre watching Tory Rory Stewart getting applauded for saying what Corbyn activists said about Johnson three years ago.

So, let’s take a quick look at the real Rory, a Tory. On home affairs, he voted in favour of wonderful liberal policies like stricter asylum measures and harsher enforcement of immigration rules. He also voted for mass surveillance of people’s communications.

On tax, he opposed a mansion tax and was in favour of stricter trade union laws. He also supported Royal Mail privatisation and legal aid restrictions.

As a true blue Tory, he voted in favour of cutting housing benefits and welfare, and against using public money to create jobs for young people.

On foreign policy, he was in favour of military deployments and nuclear weapons. For the hard Remainers in his fanbase, we should also point out he voted for the referendum, against membership of the EU, against the right to remain for EU citizens, and against further integration into the EU. That’s right, he’s Mark Francois but with Latin quotes.

For those with an interest in the climate, he voted against measures to deal with the climate crisis.

So, while we know some people will believe anything as long as posh, white bloke tells it to them, it’s worth taking a look at what that individual’s record actually is. Tory Rory might sound like a sensible managerial leader, but a five-minute poke through his voting record shows him to be about as progressive as, well, Boris Johnson.

Featured image via Wikimedia Commons/Foreign and Commonwealth Office, cropped to 770 x 440, CC BY 2.0