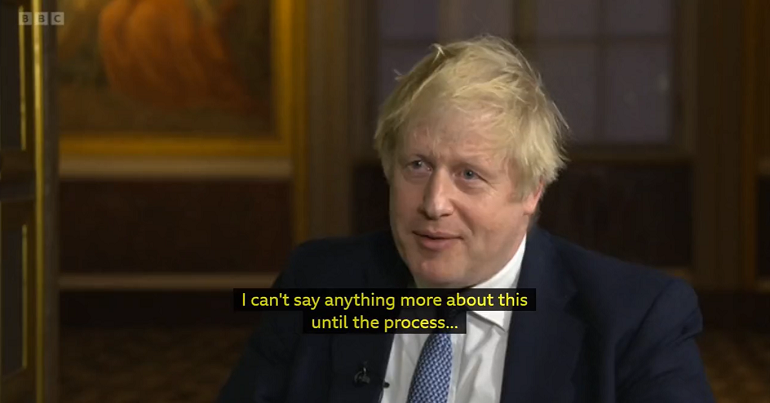 Boris Johnson said there’s “not a jot” he can say about the partygate affair. It comes as he repeatedly declined to say whether he will resign if found to have broken his own rules. As Herald Scotland and others have pointed out, there’s “no obvious legal reason” why Johnson can’t answer such questions. While it’s certainly the case that you can’t force a person to say something incriminating, there’s no law which says a person can’t discuss information that reveals their innocence.

This ultimately suggests that any answer Johnson did give would not shine a flattering light on his activities.

The man with no answers

On the BBC’s Sunday Morning programme, the prime minister faced more than 10 minutes of questioning on the topic of partygate. He repeatedly told the programme there was “nothing” he could say on the matter until the police inquiry was completed. Johnson said he hoped the public “won’t have long” to wait for the investigations to complete, claiming:

I will be saying a lot more about it in due course.

Johnson handed a legal questionnaire to police on 18 February regarding claims that lockdown-busting parties were held in Downing Street. The content of his questionnaire response has not been made public. He further claimed:

Nothing would give me greater pleasure than to give you full and detailed answers on all this stuff. I genuinely can’t because we’ve got a process under way – there is not a jot I can say until it is done

When told the public found some of his excuses for attending Downing Street gatherings “implausible”, particularly the “bring your own booze” event in May 2020, Johnson replied:

You’re just going to have to wait until the process is complete – there is literally not a bean I can tell you about that, as much as I would like to.

Johnson – the most powerful person in the UK – did not expand on who was stopping him spilling his beans.

I will be saying a lot more about it in due course.

Johnson’s excuses have done nothing to appease his many, many detractors:

Sophie Raworth is wasting her time and breath asking Boris Johnson about #Partygate and the Questionnaire as "a matter of principle" – Johnson doesn't have any f*king principles. He's lying through his teeth by not answering the question#SundayMorning

Very difficult for Boris Johnson to complain about the lawlessness of Vladimir Putin and then refuse to answer any questions about his own law breaking at home. Kudos to @sophieraworth for persisting. pic.twitter.com/sLvKSAOGae

Sophie Rayworth did her very best. But watching Boris on the BBC this morning blustering, avoiding the question and point blank refusing to answer any questions on #partygate speaks to his arrogance and contempt for voters #BorisJohnsonResign pic.twitter.com/kPz9RxKbWi

There were also other matters that the usually chatty PM felt unable to discuss:

PM refuses to say if public money will go towards Prince Andrew’s financial settlement with Virginia Giuffre, who filed a civil sex assault claim against him

Boris Johnson says “no PM ever answers questions about the Royal family and quite right too" … pic.twitter.com/IOAfDudNdV

Boris Johnson has claimed this morning that it is not the job of any prime minister to answer questions about the royal family. What he is saying that they are beyond the rule of law when it is very obvious that they need to be reminded, very strongly, of its significance.

Speaking of the police investigation and criticism from his own party members, Johnson said:

Meanwhile, Europe minister James Cleverly said the country does not need a “vacuum at the centre of Government” when asked about how the PM should react if he gets a fixed penalty notice. He presumably didn’t mean a vacuum cleaner, although it’s hard to see how a Henry Hoover could suck harder than Johnson.

James Cleverly tells Sky: “I don’t think what the country needs at the moment is a vacuum at the centre of government.” pic.twitter.com/ynwG6Neonn

Speaking to Sky on Trevor Philips on Sunday, Cleverly said:

I don’t think what the country needs at the moment is a vacuum at the centre of Government when we are dealing with our recovery from Covid, the accumulation of Russian troops on the Ukrainian border, making sure that the health service is able to deal with the sad, the unfortunate but nevertheless obvious, backlog that’s been created by Covid.

That’s what the country needs. That’s what I believe the Prime Minister should be doing.

James Cleverly wants to scrap the minimum wage but not Russian donations to the Conservative Party. That's a moral vacuum, right there.

“Fess up and resign”

If Johnson is found to have broken the law, he must fess up and resign.

If he won’t resign, Conservative MPs must do the right thing and sack him. For a sitting Prime Minister to be found guilty of breaking the law would be unprecedented and put to bed once and for all the Conservative Party’s claim to be the party of law and order.

Sophie Rayworth did her very best. But watching Boris on the BBC this morning blustering, avoiding the question and point blank refusing to answer any questions on #partygate speaks to his arrogance and contempt for voters #BorisJohnsonResign pic.twitter.com/kPz9RxKbWi

The Metropolitan Police is investigating 12 events allegedly attended by government figures during lockdowns. They include as many as six that the prime minister is reported to have attended.

Officers involved with Operation Hillman, which is examining whether coronavirus restrictions were broken in Downing Street and across Whitehall, sent formal questionnaires to approximately 50 people as they look into the details of alleged rule-breaking. Presumably the questionnaire contained questions like ‘can you confirm what you’re obviously doing in this photo everyone has already seen?’

It’s unclear if the police will start interrogating other criminals with questionnaires, but probably not.