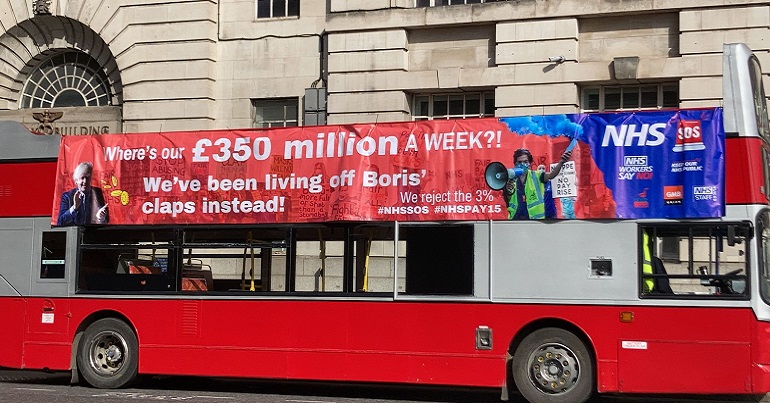 NHS workers took a clear message to Rishi Sunak before his Spring Statement. You couldn’t miss their demo either, as they hired an open-top bus to send the statement to the government and chancellor: ‘where’s the £350m for the NHS?’

SOS NHS is a coalition of campaign groups. Some of those involved include:

In 2010, after a decade of investment, our NHS was delivering its best-ever performance: after more than a decade of austerity – despite heroic efforts by staff – it has sunk to its worst-ever. The problems were there before the pandemic but have been deepened by the continued high level of Covid infections.

Indeed. As The Canary documented at the end of 2021, last year saw record waiting times; staff under intolerable stress; potentially catastrophic government ‘reforms’, and an insulting pay offer for workers. So, SOS NHS has some clear demands for the government:

These may sound broad, but SOS NHS is also quite specific with some of its demands. For example, it says the £20bn includes:

So, on Tuesday 22 March, the group took these demands on the road to Downing Street.

Touring London for the NHS

SOS NHS organised an open-top bus ‘tour’ of central London. Or rather, it hired a battle bus to take its important message around the capital:

👩‍⚕️🧑‍⚕️Great to join NHS Workers in their campaign for NHS funding and a 15% pay rise#NHSPay15 pic.twitter.com/K3gj30DadW

The side of the bus had a message on it aimed at PM Boris Johnson:

Some MPs, including independent Jeremy Corbyn, joined the demo:

Today @jeremycorbyn joined nurses and campaigners who handed in a 180,000 strong petition to Downing Street demanding emergency funding for our NHS and pay justice for healthcare staff.https://t.co/3rDgbfgJMm #SOSNHS pic.twitter.com/kdIHeBaFpf

Then, the bus made a stop outside parliament where more MPs came out to support it:

And finally, the group handed a petition with its demands in to Downing Street:

Today our alliance #SOSNHS was proud to deliver a 178k strong petition to Downing street calling on chancellor @RishiSunak to grant the NHS vital funding.

Please stand with us and RT if you agree the NHS should be a priority in tomorrow's #Budget2022 💙 pic.twitter.com/diSccXqztm

Yesterday was a high energy day of action. It was great to have frontline workers, campaign orgs, trade unions and cross party MPs out fighting together for the future of our health service and its workforce. This has always been an aim of the SOSNHS campaign, to encourage mass mobilising across movements so that we can apply direct pressure to the government. Our health service is on fire, and without immediate funding the situation will continue to become more critical.

It looks like Sunak’s Spring Statement contains little for the NHS or its workers. In fact, days earlier he announced an “efficiency drive” (cuts to you and me) for the health service. This comes after the government has spent years underfunding it. So, it remains to be seen what the long-term picture for the NHS will be like. Thankfully, frontline staff are dedicated to doing all they can to protect it. And we should all thank them for that.

NHS day of action on the eve of Budget Day: @NurseSayNO take a bus round central London to loudly declare the three demands of the #SOSNHS campaign, hand a 177,781 signature petition into Downing St and demand @RSunak pay up @NHSStaffVoices pic.twitter.com/7y0GPuIWiN