The US has persecuted its own academics. Now it's advising Britain on spying in universities. - Canary 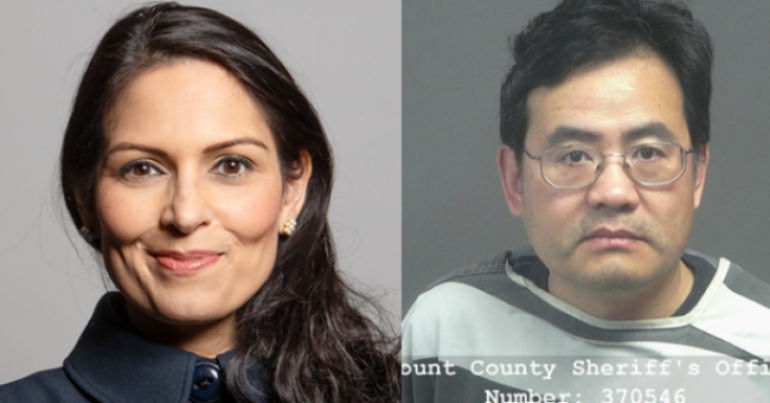 Politicians in the UK are creating new laws to target academics aiding China’s military. Home secretary Priti Patel says the US government is advising the UK on such legislation. This is a cause for real concern, because the US has targeted researchers based on their Chinese ethnicity with no reasonable cause. The UK could be going down a similar path.

US efforts have violated rights

To examine this further, it’s worth looking at the first in a series of prosecutions of academics in the US. Anming Hu is an ethnically Chinese engineering professor who works at the University of Tennessee. In 2018, the FBI arrested him. This was for not listing his collaboration with a Chinese university in a funding application to NASA.

After Hu was eventually set free, members of congress called for an investigation to be launched into the FBI’s conduct during the case. They criticised the bureau for violating his rights and persecuting him.

A juror at Hu’s trial said :

All I saw was a series of plausible errors, a lack of support from University of Tennessee [UT], and ruthless ambition on behalf of the FBI.

Additionally, the judge at the end of the case commented:

even viewing all the evidence in the light most favourable to the government, no rational jury could conclude that defendant acted with a scheme to defraud NASA

Administrators at Hu’s university gave the FBI access to his personal information without a warrant and fired him after he was arrested. FBI agents raided his house and “held his wife and two young daughters at gunpoint”, according to Chemistry World. He was put under house arrest for a year while awaiting trial and in his own words he “lost two years of his life.” He was eventually acquitted.

A paper by the Chinese civil rights organisation The Committee of 100 shows this case is not exceptional. It details many similar instances, where researchers who collaborated with Chinese institutions had their lives disrupted. The paper concluded that the FBI was more likely to falsely accuse Chinese researchers. It also noted their cases also receive more publicity and they get more prison time.

The US is advising the UK

In November 2021, Patel gave a speech in Washington to the Heritage Foundation to speak about shared security threats Britain and the US face. According to Patel, one of these threats was:

spying now has a much further reach, including into our universities and businesses.

She referred to new legislation to deal with this and that it would have US input, saying:

Our strategic partnership must continue to address all this activity – which is uninhibited and growing along with all the other threats we see in day in, day out.

Absolutely critical to this remains our CT [counter terrorism] partnerships with the US, where our shared focus and approach is central to protecting both of our countries – which I am determined to deepen even further over the coming months and years.

When asked about preventing Chinese influence in universities during a parliamentary debate on foreign influence in January 2022, Patel replied:

Let me say something about the legislation that we want to introduce. We are learning from other countries, such as Australia—indeed, I had a bilateral meeting just last week. This is also part of the work of Five Eyes [America is a member of this group].

This legislation she’s referring to is the upcoming Counter State Threats Bill. This bill would require those involved in what the government defines as “research in sensitive subject areas” to register if they are working on the behalf of a foreign power. Those who do not could face a custodial sentence according to a government-commissioned consultation which describes this element of the legislation as being modelled on US laws.

The National Security and Investment Act, which recently became law, requires universities to register their links with China. A guide issued to universities shows the government now has the ability to sever collaborations where Chinese institutions get the resulting intellectual property. In some instances they can imprison those who oversee a collaboration that has taken place without the governments consent.

The head of MI5 has also stated intellectual property theft from universities is something the security services are looking into.

Chinese academics already under threat in the UK?

Prominent figures in the UK are lobbying for a US style initiative. A former Conservative party staffer published a report for the influential Henry Jackson society chastising the government for not already arresting researchers.

In February 2021, the UK NGO Civitas published another report claiming universities working with China were aiding its military. The report’s authors have spoken to the Foreign Affairs Committee and have since had some of their recommendations adopted by the government. So it gives some insight into the thinking driving policy changes. One individual mentioned in that report told The Canary:

Tom Tugendhat – an MP who has been heavily involved in crafting the National Security and Investment Act – endorsed the Civitas report, writing:

Later in February 2021, anonymous government sources were briefing the Times that hundreds of academics were under criminal investigation. The Daily Mail editorial on the story commented:

there are lessons to be learned from the close co-operation between counter-terrorism authorities and universities which has brought considerable success in beating back the radical extremists infesting our campuses.

This is just one example of advocacy for a US style response in UK media. In February 2022, the Sunday Times named researchers whose research, they said “could help China build superweapons’“.

Two academics the Civitas report singled out spoke to The Canary. One responded to the assertion that their research was aiding the Chinese military

It’s not possible for them to steal our intellectual property, because what we do here [the UK] is just publish papers in open resource journals. People saying the Chinese military are using this is just ridiculous. It’s possible in the US that someone steals technology, but what do we have? What [technology of ours] would they steal?

Another professor who is a co-director of a research group that is funded by a Chinese company echoed these comments and went on to say:

It’s been going quite well till probably the last year or two since they started making more investigations and difficulties.

They’re not in a position to understand all the technical stuff. They probably look for keywords and more importantly, they make a decision based on what institution that person is coming from. And that list is really  what the US has dictated … Our research loses out because we think, we get more information out of them than they do from us at the level of basic research.

Additionally, they mentioned that the government is gathering more information on researchers:

Anything now to do with China they are now sending documents to collect information from these people.

Two ethnically Chinese researchers, who the media has accused of aiding the Chinese military, spoke to The Canary. When asked about the criminal investigations that are reportedly taking place, one responded:

You feel that life is so dark sometimes … I mean, we’re working so hard for businesses and for the University and UK science.

The other academic commented on the new laws mentioned in this article:

Overall, I am deeply concerned with the current geopolitical environment in the UK that becomes increasingly hostile against the academics of Chinese descent, who can be unfairly treated under such security laws.

During the war on terror, the UK collaborated with and mirrored the US policy of targeting and abusing Muslims. Now, the security services have declared China the top threat.

Our own government may be following the US’s lead again.