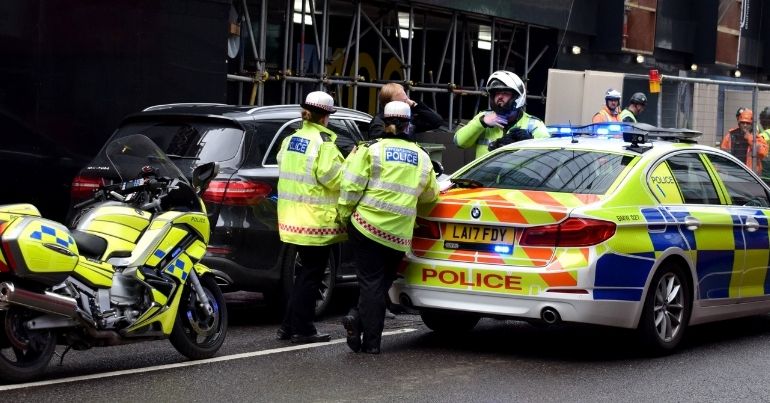 Grassroots groups including the 4Front Project, No Police in Schools, No More Exclusions, Sisters Uncut and Hackney Copwatch have come together to demand an end to the degrading and humiliating practice of strip search, particularly against children. This comes in the wake of news about the Metropolitan Police’s traumatising strip-search of a Black schoolgirl – known as Child Q.

Teachers referred the schoolchild to police claiming that she smelled of cannabis. The child’s teachers allowed officers to conduct an intimate search without supervision by an appropriate adult.

The review explains that officers stripped the child and forced her to expose her “intimate body parts”. They made the child – who was on her period at the time – remove her sanitary pad. They then made the child “bend over [and] spread her legs… whilst coughing”.

In her testimony reflecting on the traumatic incident, Child Q said:

Someone walked into the school, where I was supposed to feel safe, took me away from the people who were supposed to protect me and stripped me naked, while on my period.

I don’t know if I’m going to feel normal again. […] But I do know this can’t happen to anyone else, ever again.

The child has launched civil proceedings against the Met and her school. The force has removed the officers who were involved in the search from frontline duties, but they remain on desk duties.

According to the review on Child Q’s case, police strip searched 25 other children in Hackney over 2020/21.

And as reported by The Canary in March, a freedom of information request submitted by criminology researcher Tom Kemp found that Met officers carried out over 9,000 strip searches on children between 2016 and 2021.

4Front founder and director Temi Mwale has calculated that this equates to five children every day in the last five years. This includes over 2,000 under 16s and 35 children under the age of 12.

In a powerful video urging people to support the campaign to end strip search, Mwale said:

This is state sanctioned sexual assault. At 4Front more than 60% of our current members have been strip searched more than once. Not just in schools – in police stations, the back of a police van, in the homes of children and even on the street.

A spokesperson for the Met Police told The Canary:

Officers are highly trained around the use of stop and search. Part of the training is around unbiased decision making, unconscious bias and the impact of the use of these powers on communities.

The #EndStripSearch campaign has shared some children and young people’s testimonies of their experiences of strip-search. One young person told youth and community workers:

I got strip searched three times in one night. The first time was enough. The second time was ‘whoa what are you lot doing?’ and the third time I gave up. What can I do? I couldn’t do nothing, so I gave up.

Sharing their experience of officers taunting them during searches, they added:

Things like that can change a person’s mind, you know. From a little kid. Imagine being 14, 15, 16. You’re in a room with grown men, four strangers, grown men telling you take off your clothes, bend over and squat. They’re watching you. They’re watching you – and the funny thing is they are bantering, they’re laughing about it.

Speaking to their dehumanising experience of strip-search, another young person said:

Showing your private parts to the people that you’ve never met before. Just […] feels degrading and it feels like it’s just a very really nasty feeling to be honest about how you feel inside. And afterwards I went back to the cell, feeling very down and not in the right headspace. […]  I just felt a lot less human.

Reflecting on the devastating impact that the practice has on children and young people’s wellbeing, Mwale said:

The impact that this is having on Black youth is so extreme and we have to fight for their rights. It’s humiliating, it’s degrading and it’s dehumanising. And the long-term impact on children’s mental health is so significant.

It should not be legal. If the law says it’s justifiable for the police to strip children naked, then we have to change the law. That’s why we have to end strip search.

Stating that “we do not underestimate the impact that the use of stop and search has on some individuals”, a spokesperson for the Met Police told The Canary:

We work closely with communities in London and understand that stop and search can have a significant and lasting impact on someone, especially an MTIP (More Thorough Search where Intimate Parts are exposed) and strip searches in custody. Every search must be lawful, proportionate and necessary and carried out with respect, dignity and empathy.

But emphasising the need to abolish the practice altogether, #EndStripSearch campaigners say:

Even when ‘safeguards’ are in place, like parents being notified or an appropriate adult acting as a witness, the strip search experience is still one of trauma. A child is always traumatised, whether protocol is followed or not.

Nothing a child could hide in their body is worth them being sexually assaulted. Whether something is found or not, a child is harmed in a way that has deep ramifications for their mental health, and their future. There is no justification.

The coalition is urging people to promote the campaign to end strip search by galvanising support and sharing information about police’s use of the degrading practice using the hashtag #EndStripSearch. Supporters can keep up-to-date with the campaign by signing up for updates on its website.